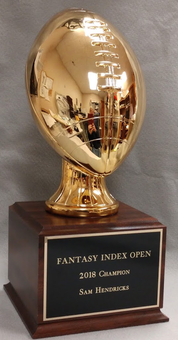 We’re crowning an overall king of fantasy football with a free, all-comers contest. The Fantasy Index Open gives you the opportunity to prove you know more than everyone else (and win a gigantic trophy at the same time).

This contest is different than a typical fantasy league. You don’t draft a “team”. Instead you submit a top 20 at each position before the August 8 deadline, and those 120 players become your roster. The higher you rank a player the more he counts towards your score.

The overall champion will take home an impossibly large trophy from the team at Affordable Trophies. They’ve been partnering with us on this venture for years.

Sam Hendricks and Michael Nease finished first and second in the contest last year, beating out almost 1,300. Hendricks took home the trophy. But they’re both industry pros (Hendricks is the author of the Fantasy Football Guidebook, while Nease writes for Big Guy Fantasy Sports. They’re already in the Experts Poll, so for the 2019 edition of the magazine, we went down to the top 2 civilian finishers in the competition – Brack Varnon of Houston, and Bryan Teegardin of Rochester, N.Y.

The 2019 version of the contest is now live. To access the entry, log into the site and then click on “YOUR STUFF”. The contest is one of the pull-down options, under “Fantasy Index Open 2019”. Those who are already logged in can get to the contest by clicking here.

Once on the website, use the drag-and-drop technology to select your 120 players in order – 20 at QB, RB, WR, TE, K and DEF. You’re stuck with those players for the duration of the 17-week regular season, so be careful about selecting players who are more likely to serve suspensions or miss games with injuries. There are no waiver moves or trades, so when a player doesn’t play, you get a zero from him that week.

Entries are due before the start of the first game of the first full week of the preseason. That’s Thursday, August 8 this year, at 7 p.m. Eastern time (the week after the Hall of Fame game). Until then, feel free to start on your picks, coming back to make adjustments for injuries and holdouts. But once that deadline hits, all entries are locked.

There’s a change in the scoring system this year. We’re going PPR, with players getting 1 point for each reception. Otherwise, it’s the same as in previous years – 6 points for touchdowns, 4 for TD passes, 1 for every 10 run/rec yards and 1 for every 20 passing yards. Defenses receive 2 points for takeaways, 1 for sacks and 6 for every touchdown scored on a return of a takeaway or kick. Kickers get regular NFL points – 3 for field goals and 1 for PATs.

We’ll come back and score all of the picks using a complex scoring matrix that combines a player’s production against where he was ranked. Basically, the higher you rank him, the most his production counts. Suppose, for example, that Justin Tucker finishes the season with 100 points. If you ranked Tucker first, that would net you 2,500 points (25 x 100). If you ranked him second, you would receive 2,400 (24 x 100). Third would be 2,300 (23 x 100) and so on down to 20th being worth 600 points (6 x 100). We use that same approach for all 120 players ranked by each entry, with the overall high score winning the title.

You’ve got just under two weeks left to complete your entry. Best of luck to all.