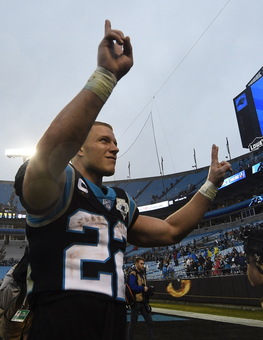 Can anyone unseat CMAC?

ASK THE EXPERTS appears weekly from training camp through the Super Bowl. This is our final question of the season. How the guest experts responded when we asked them: What is your preliminary Top 10 for the 2020 season?

Picking my Top 10 seven months before the 2020 season even starts is kind of like pulling names out of a very small hat. First I eliminate every player, except for running backs and receivers. I love Jackson and Mahomes, but there are more important needs to address at the top of the draft than quarterbacks. Here are the players who I see at the top right at the moment.

I pulled out the names of all of the guys I might consider in the first or second rounds of a 12-team PPR draft. I don’t see a strong No. 1 overall player. Saquon Barkley is definitely one of the candidates, but that probably will be a lesser team. Michael Thomas caught a ton of balls last year; the Saints won’t necessarily have Drew Brees back, but Thomas was productive last year even when they were going with Teddy Bridgewater. Christian McCaffrey put up monster numbers last year, but he’ll be playing in a completely different offense. Scoring systems typically tend to work against quarterbacks, but there are three I think should be part of the discussion as early picks (and I went with Patrick Mahomes as my top guy at that position). Lamar Jackson was great in 2019, but with him being a wildly unconventional player, I’ve got him as the No. 3 quarterback for now, behind Deshaun Watson.

Ian Allan answers your fantasy football questions. Special year-end edition. What's up with Kupp? Which teams will rest their players in Week 17? And pulling off an undefeated season.

Who was the only member of the Tennessee Titans who last year caught 3 TD passes inside the 10-yard line?