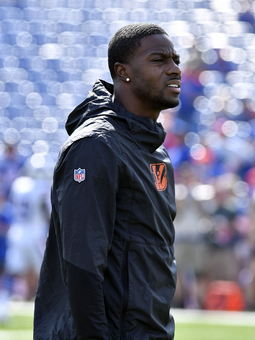 A.J. Green is headed for free agency, but the Bengals have maintained all along that he’s not going anywhere. They’re talking as if it’s a near-given that he’s going to re-sign.

“We want him to be a part of Cincinnati,” Zac Taylor said on a local radio show. “He's got a great history with the organization. He's been a great member of the community, a great leader on our team. Even facing the adversity he faced the last year-and-a-half, he's been around in all the meetings. I've really enjoyed getting to know A.J. I look forward to coaching A.J. really for the first time going into next season.”

“We want A.J. back, we value him,” says Duke Tobin, their director of player personnel. “He's been a great member of our team and hopefully something can come together. We'll see where it goes. He's an important guy and he's done it the right way. We view him as a Bengal and want him around and want him to be part of the future.”

Green is 31 and missed all of last season with an ankle injury. He’s missed time with injuries in three of the last four seasons. That would presumably deflate his value, but the Bengals seem ready to pay for him. If they can’t work out a long-term deal with Green by March 10, they could protect him by using that franchise tag. That would guarantee Green $18 million for the 2020 season.

Green is one of the headline wide receivers who will be on the market this season. Amari Cooper, Robby Anderson and Emmanuel Sanders are also currently scheduled to be unrestricted free agents. Then it tails off into more modest options, such as Breshad Perriman, Demarcus Robinson, Randall Cobb, Tajae Sharpe, Geronimo Allison and Phillip Dorsett.

With all of these receivers, I think they’ll be adversely affected by an unusually deep crop of good receivers available in the draft. I heard Todd McShay the other day saying that he currently has 29 with grades putting them in the first three rounds. If teams feel confident they can pick up a contributing wide receiver in the second or third round that should limit how much they’re willing to pay for free agents. Receivers like A.J. Brown, Deebo Samuel, DK Metcalf, Terry McLaurin, Diontae Johnson and Mecole Hardman went in the second and third rounds last year – it’s a great area to shop for wide receivers.

If 30-40 rookie receivers are landing on NFL rosters, that means a similar number of veterans will be pushed out of the league. And the market should be cool for modest veteran free agents. The number of wide receivers on the 32 rosters is fairly constant.

Below is a rough draft of the top 25 wide receivers headed for free agency. I would expect that only about 10 of those guys are actually on NFL teams in September. So I will be surprised if teams are willing to pay much more than the minimum for players like Cobb, Dorsett and Allison.

Demaryius Thomas, Devin Funchess and Ted Ginn are notable names, but I’m not sure there’s room in the league for them anymore. I think they get pushed out.

And this depth at the position should restrict how much teams are willing to pay for the top-end guys like Cooper, Green, Anderson and Sanders. Running backs have been underpaid in recent years because of supply-and-demand dynamics. We might now start seeing some of the same at the wide receiver position – there are a lot of good ones out there.