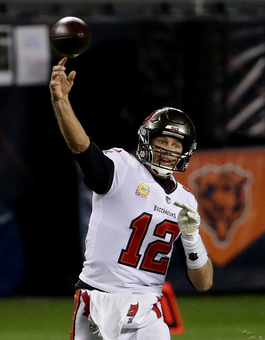 The last time Tom Brady and Nick Foles squared off, we had a thrilling Super Bowl won by the Eagles. Foles came out on top again last night, but it wasn't nearly as entertaining. Unless you like defensive plays, penalties and field goals.

I think I'm over the fake crowd noise already. At least when you watch a sitcom with a laugh track, you can imagine there might be an audience in attendance. With these games, the camera repeatedly shows the empty stands behind the players. Where is the roar coming from? There's nobody there. It's a little much.

Much has and will be made of Tom Brady seeming to think the fourth-down incompletion that ended the game was a third down. Amusing. And it was significant because Brady seemed to have KeShawn Vaughn open for a short completion that would have picked up the 4th and 5 and given the Bucs a few more plays to maybe move into field goal range. Whoops.

In general, though, Brady threw the ball well -- looks much better out there than other old man quarterbacks like Drew Brees and Philip Rivers. He absolutely got killed by the Bears pass rush, continually coming off the edge and flattening him, often forcing him to just drop to the turf rather than get sandwiched between two guys. Bears are good, and the Bucs offense doesn't show a lot of love for its quarterbacks in this regard. But watching the Bucs, I still think they're going to win the NFC South and be a factor in the playoffs. We'll see; next game is against the Packers. Defense looks for real to me.

Nick Foles was pretty awful for most of this game. He had a little hot streak in the second quarter, it's what he does, and he made a beautiful throw to David Montgomery to set up the game-winning field goal. But the vast majority of his throws were off-target (like an easy 3rd-and-short play early, and what should have been a touchdown to Darnell Mooney), should have been intercepted, or could have been intercepted. Lots of underthrows, including the one that was intercepted and bobbled by Allen Robinson. Foles is going to win some games because he'd clutch and unflappable and has a good defense, but there will also be games where his opponent doesn't make as many errors/penalties as the Bucs did last night.

David Montgomery is a nice player. We were higher on him than most and I'd have him everywhere but for the preseason groin injury. He runs hard, he's got a nice cutback move, and now he's got the passing game role to himself. Finished with better PPR numbers than I expected last night, thanks to some short catches that went nowhere and being able to punch in a short touchdown. That's as good a defense as he'll see and he did well in lineups, so he's going to be a nice starter the rest of the way.

I want to like Ronald Jones, but he's not much fun to watch. At best he gets what's there and is a functional receiver. He's rushed for over 100 yards two weeks in a row, you can't take that away from him. He was also robbed of a touchdown last night after making an ugly catch of a short throw near the goal line. Refs blew the play dead as incomplete, so when it was ultimately ruled a catch the ball was spotted short. But he did nothing and does nothing that makes you think the team won't continue to use other backs and eventually give Leonard Fournette a shot at the job. KeShawn Vaughn did OK in passing downs. Charged with an early catch and fumble which I think he needs to be cut some slack for since he was absolutely decleated on the hit, which sidelined him for a while, though he returned. If he remains behind LeSean McCoy (when healthy) it will be because of pass protection. I didn't specifically see him blowing blitz pickups all over the place, but Brady was certainly getting clobbered back there.

Allen Robinson is great, and looks like he'll put up good numbers with Foles. There will be some off-target throws and maybe not a ton of touchdowns, but Foles will jam some throws into him and he'll get open. Darnell Mooney looks better than Anthony Miller and that's probably how things will go the rest of the way. Mooney beat his man and should have had a long touchdown, but Foles was throwing to an invisible receiver 15 yards to his right.

If Chris Godwin were healthy, Bucs would have won last night. Instead Mike Evans was Brady's sole top-quality wideout, and he was playing hurt too. Evans caught a touchdown and was free for another on a play he turned the wrong way or Brady threw the wrong way; whatever, those guys are hooking up for a lot of scores and now Evans has a few extra days to get healthy for Week 6. Scotty Miller was also playing hurt and maybe that's why he took a zero. Tyler Johnson had a better game, and is a guy to monitor for dynasty, but would have been behind Godwin and perhaps Justin Watson if either guy was healthy. Although maybe he earned more snaps last night. Even if Miller were healthy, I think Evans and Godwin are probably the only receivers you'll be able to comfortably use here.

Really cool one-handed touchdown grab by Jimmy Graham last night. That's how he'll pay off in a lineup; he's not going to catch 7 passes or go for 80 yards. But Foles has a trust (Graham also failed to reel in a catchable end-zone ball) so he'll be usable. (Helped me win $20 last night, too, thanks Jimmy.)

The Bucs tried to make Tanner Hudson happen early on, a scare for those who were using either Rob Gronkowski or Cameron Brate. Hudson you'll recall as a preseason favorite of ours a year ago. He was open for a touchdown over the middle early but Brady overthrew him, being hit by a pass rusher on the play. A couple of plays later he dropped a pass on third down (hit hard after it, but still) and wasn't heard from again. Gronkowski runs like he has a piano on his back but did make a couple of nice plays late, one that set up a field goal. He was also open on Tampa Bay's final drive but Brady threw a little behind him. Brate is probably the best receiving tight end on this roster now -- moves better than Gronk and hands more reliable than Hudson. I think he's the main beneficiary of O.J. Howard being out and nothing I saw last night changed that.

Both Ryan Succop and Cairo Santos made all their kicks last night (there were 6 of them). I don't know why the Bears would go back to Eddy Pineiro when he's healthy, but what do I know. I'm sure whatever the Bears do, they'll choose wrong.

The Tampa Bay Defense has climbed regularly in the rankings and that's looking good. It's a tough defensive front and it's making plays. Secondary might be a little light but it's not as soft as it was a year ago. Bears Defense needs to move up some. They're good and there's some talent there, and anyone watching Cordarrelle Patterson last night knows he has a kick return touchdown in his future.

It was an entertaining game, ultimately, albeit with too many penalties and too many field goals. I didn't think much of Nick Foles, but he'll probably make enough plays that this will be a 9- or 10-win team and maybe sneak into the playoffs as the 2nd-best NFC North team. Tampa Bay, meanwhile, looks to me like the best all-around team in the NFC South. I think they're going to go 11-5 and maybe edge out New Orleans.