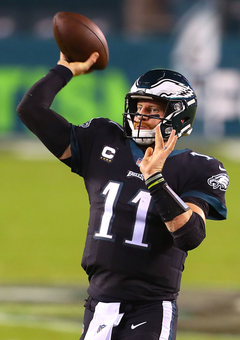 Where to start with this eyesore? The main thing I was left with was wondering how much of the Eagles Super Bowl win was Frank Reich. When Bill Belichick's coordinators leave for other jobs, you quickly realize he was the brains behind things. Seems like the opposite with Doug Pederson.

Granted, the Eagles have a injury-gutted offensive line and receiving corps. Plus they won the game and are kind of in first place in the NFC East. But I couldn't help but thinking this is a team winning games a lot more by Carson Wentz pulling plays out of his ass than anything happening on the sidelines.

Nowhere was this more apparent than near the goal line. Remember the homerun throwback play in the Super Bowl? Well, the Eagles' current goal-line play -- which they went to time and time again -- is to snap the ball to Carson Wentz in the shotgun, have him shuffle his feet a little to confuse the defense, and then run up the middle into a couple of punishing hits. They kept doing it. On occasion it worked, on occasion it didn't, and on every one of them Wentz got blasted by a couple of defenders. It just doesn't seem like smart football.

Considering how much his line is struggling and what his receiving corps looks like, Wentz did pretty well -- made some great throws, including the winning touchdown to Boston Scott and a sideline throw to set it up. I think Wentz has his critics, but I'm willing to say he's basically the only thing the offense has going for it right now. With a lot of other quarterbacks they lose last night's game 21-10 or worse. I get there are people who believe the Eagles should have kept Nick Foles and shipped off Wentz. No. Fantasy-wise, Wentz's willingness to run and the team's lack of a ground game, especially with Sanders out, makes him a nice option. He got 33 points against me in a league last night, ouch.

Poor Daniel Jones is going to have watch his ridiculous pratfall where he tripped over the 20-yard line with no defender within 10 yards of him for the rest of his life. The Giants scored on that drive anyway, so at least there's that. Jones impressed me (qualifying that by saying a week ago I'd about given up on him being any good at all, so this game was a step in the right direction) in doing all he could to get his team a should-have-been win. He's a willing and capable runner, face-plant not withstanding. He made a beautiful touchdown throw to Sterling Shepard, and an even better touch pass to Evan Engram that should have ended the game. Did more than enough to win.

Jones' lack of pocket awareness is a problem. His game-ending fumble where he held the ball forever was the most predictable thing in the world. But watching last night's game, I felt comfortable that even after the team goes 4-12 or whatever this year, he'll be their starter next year. He is not the problem here.

The less said the better. A nifty touchdown catch at the end by Boston Scott. He's their guy, playing nearly 70 percent of the snaps. Corey Clement played about 20 percent with no impact. If you started Scott, he worked out. But it was lucky, since a third of his 92 total yards and his touchdown came on a final drive that wouldn't have happened if Evan Engram didn't commit a grisly drop. Still, Scott will have value if Sanders can't play next week.

Wayne Gallman was the best Giants running back. As with Scott, he didn't do anything until late, running up the middle against a tired Eagles defense. But that production counts, and if the ankle injury that knocked out Devonta Freeman is serious, Gallman will be the starter here and probably have value in fantasy leagues. I don't know why the Giants don't like Dion Lewis (or why they signed him at all if not to use him) but he barely played on offense. Note that Gallman's numbers didn't look good (10 for 34) but he gave the offense a spark late, which would have been remembered if the Giants didn't blow it.

Congrats to those who picked up Sterling Shepard and started him last night. There's clearly a trust between him and Jones, and he made some nice catches for him. Not the case with Golden Tate, who seems to be the clear No. 3, and No. 4 if you count the tight ends. Darius Slayton was also kind of forgotten about as Jones locked in on Shepard and Engram. Bottom line: Shepard will be the No. 1 here until he gets hurt again. Slayton will have the occasional huge game, as he has throughout his career, but be forgotten at times. Tate doesn't look like he can be used.

Travis Fulgham and Greg Ward are the top 2 wideouts for Philadelphia, and will be until Jalen Reagor is able to return. Fulgham couldn't bring in a touchdown in the corner of the end zone, catching just 5 of 11 targets, but did have a big 40-yard grab and in general looked like a go-to guy. That's four games in a row of him being a legit No. 1 in this offense. I'm a believer. Especially with DeSean Jackson hurt again (blown up on a punt return of all things, good choice Doug Pederson) and Alshon Jeffery seemingly with slightly more chance of suiting up for the Eagles than I have at this point. Ward made a couple of key grabs; he runs good routes and is a guy Wentz looks to on third downs. Not a start but usable PPR production going forward, I think.

Have I ripped Evan Engram enough? I don't think so. He lost the Giants the game last night. Yeah yeah, team game, sure, whatever. Catch a perfect pass that hits you in both hands with no defender close to you and the Giants win. Period. He's a busy target with some fantasy appeal on that basis. But that drop will stick in my mind for a while.

Richard Rodgers had a nice game. Wentz likes throwing to his tight ends, and with Dallas Goedert not necessarily back for the next game and Zach Ertz out 4-6 weeks, he'll probably have more 5-6 catch games in his future. In today's tight end landscape, that's a regular starter.

Graham Gano made his extra points. Jake Elliott missed a short field goal and watched helplessly as the Eagles ran Wentz into the backs of his players on a couple of 2-point tries. Both these teams are headed for sub-.500 records (Eagles might win this division at 6-9-1) and their kickers aren't going to be overly valuable.

Both defenses have some ability. Each had 3 sacks and an interception, the Eagles recovered 2 fumbles. Nothing to get excited about -- you'd basically have to be in a team-wide coma not to get 3 sacks off these two quarterbacks -- but some value in the right matchup, basically against each other or Washington.

Officiating did not cover itself in glory in this one. They weirdly missed a blatant hold in the end zone on a fourth-down play by the Eagles (for new tight end and former Cardinals wideout Hakeem Butler, by the way), then seemed to throw flags on every damn play from that point forward. Make-up calls don't make anyone happy, they just make games longer. A Giants defender threw a punch and got a 15-yard penalty, but not an ejection -- isn't that usually an ejection? A more timely whistle might have spared DeSean Jackson his injury, too.

The thing I'm going to think primarily about this game was the Eagles look generally bad -- a 5-11 type team that would be even worse if it weren't for Wentz's one-man offense. The Giants are just awful on offense, and I'm not sure Joe Judge will get more than year running things. There's more wrong here than not having Saquon Barkley; he wouldn't be putting up big numbers on this team either. There is some defensive ability and I think Jones and Shepard have some potential the rest of the way. But 3-13 looks likely.