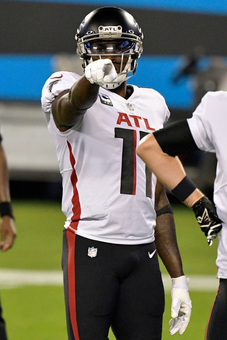 This one was representative of a lot of these Thursday night games. A slow-paced, fairly uninteresting divisional battle between two teams going nowhere in 2020. Only a few players delivered serviceable numbers, and one of them was a kicker. And it was raining throughout, factoring into some lesser production. But some stuff worth discussing.

Most notably, you have to feel a little for Arthur Blank and the Falcons. This 2-6 team would be 4-4 but for an opposing onside kick recovery and an accidental touchdown run last week. That's not even counting the collapse against Chicago. But I suppose it's just as well since this is a 7-9 type team at best. Anyway, off we go.

Matt Ryan played a mostly good game. "Mostly" because of an awful interception that had no chance of being completed, looked bad from the word go, and helped put the Panthers ahead 14-6 at the time. He had a couple of other off-target throws in the red zone that contributed to the team kicking 4 field goals in a game they basically dominated but still didn't clinch until the final minute. But he made some plays with his legs, unusual for him, and did OK despite losing Calvin Ridley to an ankle injury. He didn't give you great numbers if you started him, but he wasn't any worse than you might have expected. (I did see some people expecting a wild shootout, which was odd -- these team did play a 23-16 game about 17 days ago, right?)

I probably owe Teddy Bridgewater an apology of some kind. I didn't think he'd do much of anything in Carolina, but he seems to be a viable NFL quarterback. Didn't have great numbers last night, but his protection was awful (no Russell Okung) and he missed a couple series after a cheapshot to the head and neck area -- bad, but I was surprised it resulted in a disqualification. Ran a little bit. Not a great performance, but affected by the missed time and under a lot of pressure throughout. XFL fans from last year will remember backup P.J. Walker lighting up that league. In this game he was 1 of 4 for 3 yards, with one downfield incompletion a hospital ball that would have got his receiver killed if completed.

Watching this game, you wouldn't have known that Mike Davis is a journeyman backup and Todd Gurley a former first-round pick. Davis runs hard and drags tacklers downfield on every play. He averaged 5.1 per attempt against a run defense that's mostly played well. Wasn't used much as a receiver, unfortunately (Atlanta seemed to be looking for it, blowing him up on both balls thrown his way), and he'll be a backup again next week. But Davis has been decent for those who were able to pick him up.

Gurley looks like he has an anvil on his shoulders. When he tries to take runs outside he looks like he's in slow motion, barely making it back to the line of scrimmage (if that) every time. He went out of bounds on a late play with Atlanta killing the clock, his second mental error in as many weeks. In fairness, the play (an end-around) made zero sense at that point in the game and had no chance of being a positive one; hard to see what they were thinking there.

Gurley spent large chunks of the first half on the sidelines, raising the question of whether he was hurt or not. Brian Hill was more effective running it and better in the passing game (Gurley wasn't even targeted), although he did have a drop at one point. On one drive Gurley picked up a couple of decent gains through the middle and punched in a touchdown. That's basically all he should be doing: running up the middle and scoring. But his days of running for 80-90 yards are over. Seems like it will be more of a Gurley-Hill committee going forward. Qadree Ollison was active to handle a short-yardage carry, lumbering for 3 yards. I wonder if that will continue; it's possible. Please do no pick up Ollison anywhere.

Ryan was finding Julio Jones early and often in this one, right from the get-go. Long before Calvin Ridley left with an ankle injury it was clear this was a Jones night. He looked like the elite receiver he is; no touchdowns of course, and the one ball thrown his way in the end zone was behind him, and he still almost caught it. Will be surprising if Ridley didn't damage ligaments and miss time for the Falcons. Russell Gage did nothing of note, but he'll be viable in upcoming games if Ridley is out.

We steered people away from DJ Moore this year. Good player, but the offense isn't built around jamming it into him like it was a year ago. Last night was an extreme example, with Moore not even catching a pass until the final 3 minutes. Robby Anderson is more of a go-to guy, and last night was a Curtis Samuel game. Touchdown run (with him in the backfield like a running back, second week in a row for that), touchdown catch off a flea-flicker and another missed connection on a deep throw where he was open but it was slightly overthrown. Problem with Samuel is he's not really seeing enough targets to produce every week, but a nice game for him. Those running plays should keep showing up, with his moves and vision.

Carolina doesn't throw to Ian Thomas. Enough said. Hayden Hurst isn't as involved as Austin Hooper was, but he's been putting up decent production all along. In my TE-premium league (1.5 points per reception) he's currently 4th in points behind Kelce, Waller and Kittle. Dropped a pass last night, but had a couple of nice grabs in there. More touchdowns would be nice, but Matt Ryan isn't exactly lighting up the scoreboard. If Hurst is your starter at the wasteland this position is you don't have much to complain about.

Younghoe Koo missed an extra point that made things more interesting than they had to be at the end, but another very good game for Koo. The Falcons are the epitome of an expression Ian favors: "Seem to run out of ideas in the red zone." The offense moves the ball well enough that Koo should continue to knock in a couple of field goals in most weeks, even if Atlanta's headed for 6-10.

Falcons Defense seems to be playing better since Dan Quinn was fired. Or maybe it's just the matchups. In any case, they got a lot of pressure on Teddy Bridgewater last night, and some of their hits were even legal. The Carolina Defense doesn't do much in the way of sacks or turnovers, getting 2 sacks and a gift interception against Matt Ryan, whose mobility in the pocket is not exactly gazelle-like.

I watched more of the pregame and halftime shows last night than usual. I hadn't been missing anything. Terry Bradshaw was never the brightest bulb on the tree, but it seems like his final season with a regular studio job. He says some head-scratching things and doesn't seem to be all there. I'm not trying to be mean, but it's uncomfortable listening to him at times. He came out with one last night about 31 of 32 teams being happy with their quarterback situations (he excluded the Bears, which seemed unnecessarily mean). But really, the Broncos, Jaguars and Washington are happy with their quarterback situations? The Patriots? Colts? Whatever.

In defense of Thursday Night Football, two of the next three games are Packers-49ers and Seahawks-Cardinals. I don't know the league accidentally allowed those matchups to sneak onto the schedule, but it's not too early to start looking forward to them.