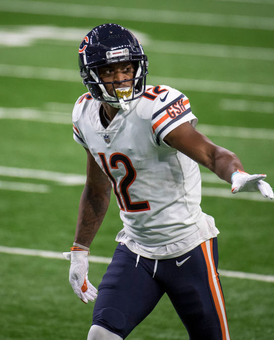 If you’re a fan of strength of schedule, the Bears, Eagles and Colts look like teams that could be trending upwards. The Patriots and Cardinals, meanwhile, could be undermined by harder schedules.

If we’re looking simply at average points allowed, the Bears project to play by far the easiest schedule. Their next seven opponents have allowed an average of 29.4 points per game – 2 more than any other team. Chicago has been terrible so far, of course, but it reasonably should be somewhat better going forward, considering the level of competition.

If you look at hardest schedules, there are some notable offenses down near the bottom, including Arizona, Buffalo, Seattle, Tennessee and New Orleans.

If you want to get into looking at pass-specific strength of schedule, the Bears and Eagles again wind up in the top spot. Chicago’s next seven games (and I had to double-check the numbers to make sure they’re real) are against defenses that currently are allowing an average of 276 passing yards and 2.2 TD passes per week. As crappy as Nick Foles has been playing, you would figure he’d have to be at least a bit better in his next seven games. Perhaps we should all be looking more closely at guys like Allen Robinson, Darnell Mooney and Jimmy Graham.

The two hardest passing schedules (at least for the next seven games) belong to teams with two of the very best quarterbacks: Russell Wilson and Aaron Rodgers. Hmm.

On the chart below, you’re seeing per-game averages for passing yards and TD passes. The “points” combines the two, using 6 points for each touchdown pass and 1 point for every 10 passing yards.

If you’re looking for schedules favorable for running backs, the Colts, Steelers and Bears seem to have the easiest upcoming schedule. (Andy noticed the other day that David Montgomery had an easy upcoming schedule, but below are the actual numbers.)

The least-favorable run schedules for running backs project to belong to the Falcons, Raiders and Saints.

On the “points” column here, that’s a composite of the other two, with 6 points for each rushing touchdown and 1 point for every 10 rushing yards.