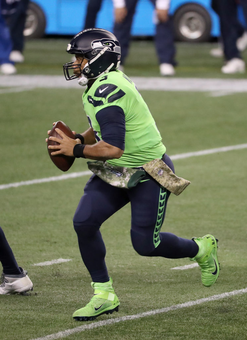 Hope you bet the under in last night's game, which was a little more defense-oriented than most of Seattle's other games. A lot more defense-oriented. Picking up Carlos Dunlap was definitely a huge get for Seattle, and they also just played with a lot more attitude than in the past. Arizona, meanwhile, looked a little bit out of sync all night. NFC West is gonna have a wild finish.

Kyler Murray was off for a lot of the night. He took an early hit that might have injured his shoulder; was seen working on it on the sidelines. Seattle also seemed determined to keep him in the pocket more; he ran for only 15 yards, well below his averages. It was frustrating to watch if you started Murray, as everyone who had him did. For one thing, the zone-read plays don't seem to work as well if you never actually give the ball to the running back. Murray ended up finishing with credible numbers and didn't hurt you, but it wasn't his usual monster fantasy performance.

There was a key (I thought) sequence right before the half where a Murray run on second down seemed to pick up the first down, but he got a lousy spot leaving a third and short. Instead of waiting to see if that might be reviewed, Arizona tried to hurry up and did a zone-read play where the running back would have easily picked it up, but Murray kept it and got buried. Seattle got the ball back and tacked on a field goal before the half, resulting in at least a 6-point swing. Anyway, we'll see if Murray's shoulder is OK. Aside from that, they're going to need to do a better job of disguising those quarterback runs (and actually giving the ball to the running backs) because other teams will try the same stuff Seattle did.

Russell Wilson passed a little less and for fewer yards than he has been, as anticipated. They got their running game going a little more, and Wilson didn't force any passes -- generally had wide-open receivers. He had a touchdown dropped by DK Metcalf; maybe the receiver was screened a little bit. Not Wilson's best fantasy game, but a good NFL one, and a big win.

Carlos Hyde looked really good last night. Watching him play sometimes you wonder why he's bounced around to five -- five! -- different teams since 2018. He runs hard, he can catch the ball, you don't hear about him doing or saying stupid things. Why didn't Houston bring him back rather than trade for David Johnson? Odd, really. Seattle will get Chris Carson back next week and Hyde will be back as the No. 2 until Carson gets hurt again, but he paid off for those who started him last night.

Kenyan Drake and Chase Edmonds are a fairly even committee these days. Drake will get more rushes, Edmonds will play more in obvious passing situations, and occasionally you'll get burned starting or benching either one of them. Last night neither was effective running it, but both caught 4 passes and both scored, so they worked out fine in lineups. I didn't start both guys anywhere, but could have. Honestly, both guys looked pretty impressive, despite the lesser rushing numbers; they just didn't have much space to work with. Drake literally ran around a defender on one play, Edmonds looked good in the passing game.

So some people no doubt benched Tyler Lockett and are annoyed about it this morning. Working on the writeup on Tuesday, the information at hand was Pete Carroll's quote that Lockett "had a bit of a knee sprain," but that it wasn't serious. Lockett didn't practice on Tuesday. To me, a wide receiver with a sprained knee -- little bit of one or not -- is a risky play in a Thursday night game. Carroll's reassurances ring hollow when you consider he called Chris Carson a gametime decision for a game four weeks ago, and Carson hasn't played at all since then. Anyway, Lockett played three-quarters of the snaps and caught all 9 passes thrown his way for 67 yards and a touchdown. Looked perfectly fine out there. If you benched him, my apologies, hope you win anyway.

DK Metcalf caught a touchdown early, but otherwise didn't have a big game. He had a dart hit him in the face mask in the back of the end zone right before the half, maybe he was screened by a defender, tough to say. He also drew a long pass interference penalty on a play where Patrick Peterson had a fistful of jersey. Not a great game, but good enough with the touchdown, kind of like the Cardinals running backs. David Moore did nothing, in part because Lockett was a-OK.

Larry Fitzgerald has stepped up his game, or stepped up his involvement lately. Just 2 for 13 against Buffalo, why he was on fantasy benches last night, but 20 catches for 178 yards in his other three most recent games, including identical 8 for 62 games in the two Seattle contests (weird). My son and I are rooting for Fitzgerald to win a Super Bowl this year; who wouldn't like to see that, he's been a great pro. Unfortunately his better games lately are eating into the production for DeAndre Hopkins and Christian Kirk, who disappointed last night, but those guys have still been pretty good most weeks.

Greg Olsen suffered a foot injury last night that will probably be a season-ender, maybe a career-ender. Unfortunate for him. One player's injury is another player's opportunity, and suddenly Jacob Hollister and Will Dissly look more promising in fantasy lineups. Collectively, the three players average 5 catches for 51 yards per week, with 3 touchdowns. Totally unusable when split three ways, slightly more palatable split two ways (still not league-winning production, but it's a tough position in a lot of leagues). Hollister looks like the better add, I think.

Arizona tight ends have been a little more involved lately. Last night Dan Arnold and Maxx Williams combined to catch 3 passes for 33 yards, and a touchdown by Arnold. Arnold also failed to hang onto an early ball over the middle that would have picked up a first down; big hit, but I think if he'd just secured the catch and got down, rather than thinking about where he was going to go with it (which wouldn't have been far), he'd have kept the drive alive. Whatever, you don't want to start either player.

Jason Myers had an ugly miss on an extra point but made his field goals, Zane Gonzalez only got to kick extra points with the offense struggling most of the night but at least cashing in its red-zone chances.

The Seattle Defense unveiled some new-found aggressiveness, sacking Kyler Murray three times (including the game-ender on fourth down and generally making things tough on the offense. Impressive outing (where has that been all year?), but Dunlap is definitely part of the improvement. The Arizona Defense looked like it was headed for a huge outing, sacking Russell Wilson three times in the first 20 minutes of the game. But that was it, and it took several key penalties -- including a costly one on Dre Kirkpatrick that kept a Seahawks touchdown drive alive -- that were key factors in the game. On behalf of this defense, the pass rush looked good at times and the remaining schedule is favorable, especially in the fantasy playoffs: from Weeks 14-16 they'll face the Giants, Eagles, and 49ers (who will be mailing things in with backups at that point, if they aren't already).

I'm not sure Seattle is the better team, but they're the more experienced and battle-tested one (both on the field and on the sidelines), and I think that made a difference last night. And it's huge, considering Seattle now has a one-game lead and a more favorable remaining schedule. Their next four are at Philadelphia (for the sake of discussion we'll say that could go either way) but then home against the Giants and Jets and at Washington. Will be a shock if they don't go at least 3-1 in that stretch. Cardinals are at New England, home against the Rams, at the Giants, and home against the Eagles. I think 3-1 will be a little more difficult, and they're a game back now. It's not hard to see a situation where Seattle is the NFC's No. 3 seed, and Arizona is 6th...and these teams meet again in the first round of the playoffs.