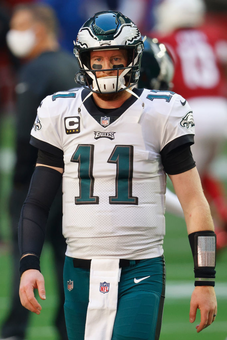 If you’re holding Carson Wentz in a dynasty league, it’s a very good day. He has flaws and has possibly regressed, but if any coach can get him successfully re-booted, it’s Frank Reich.

Reich was the offensive coordinator in Philadelphia, of course, when Wentz put together the best season of his career. Wentz was on his way to winning league MVP honors that year before tearing his ACL. Wentz in 2017 threw 33 touchdowns versus 7 interceptions in 13 games.

The Eagles threw up their hands and agreed to a Wentz trade today. He heads to Indianapolis in exchange for a third-round pick and a 2022 draft selection (probably a second-rounder, but it could possibly upgrade to the first round).

Without Reich, Wentz hasn’t been as effective the last three years, with too many sacks and turnovers. There have been suggestions he hasn’t worked well with coaches and teammates. Wentz was particularly bad last year, when the offensive line completely fell apart. He was the league’s most-sacked quarterback (by far) last year until they mercifully pulled him in December.

But as I play around with the numbers, I notice that even during these last three years, there have been some redeeming qualities in Wentz’s play. Especially around the goal line, where he’s been arguably the league’s best quarterback at successfully getting the ball in the end zone. He’s willing to hold the ball and take a lick, and he’s consistently been one of the best at coming through in those clutch situations.

Consider specifically Wentz’s work inside the 10-yard line. This is where the field is smaller and there’s not enough room for guys to get as open (and they don’t stay open for as long). Wentz in that part of the field over the last four years has completed 73 of 108 passes, with 59 scores, 5 sacks and 1 interception. He’s successful delivered the ball into the end zone on 52 percent of his plays, the best rate in the league. Over the last four years, only four times has any other quarterback produced touchdowns on at least half of his plays in that part of the field.

Note, by the way, that the stats below are of the home-cooked variety. They include not only official NFL numbers but also 2-point conversions (which aren’t considered official “plays” by the league). I’m leaving those 2-point conversion throws in there because I think they’re telling. They help us see how quarterbacks perform when they’re around the goal-line in a situation where they need to produce. So for the 59 end zone (EZ) completions for Wentz below, they include 47 touchdowns and 12 successful 2-point conversions.

Not on the above chart, I’m not showing every quarterback. That would be about 120 guys. I’m showing only quarterbacks with at least 20 plays in that part of the field who were able to get the ball in the end zone on at least 40 percent of their plays. (The players are sorted descending by end zone effectiveness.)

I can’t guarantee Wentz will turn things around. He looked pretty awful last year. But I like that he’s now got this coaching staff around him. And the Colts have a good supporting cast. They need to find a left tackle, but they’ve got some good blockers. Michael Pittman looks like an emerging young receiver, and they’ve got other pass catchers. They should be able to run the ball effectively.

It’s early. A bunch of teams don’t even have their quarterbacks in place yet. But I’m thinking Wentz will look good in the teens this summer. I think I would be satisfied loading him onto a fantasy roster as a second quarterback.