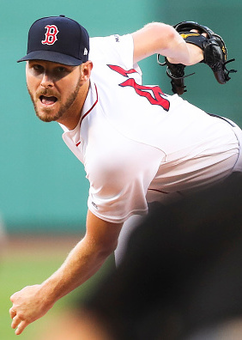 Editor's note: Our Fantasy Baseball Index Cheat Sheet rankings are more aggressive than those of our competitors on many players who will start the year in the minors or on the injury list – most notably Carlos Carrasco, Miles Mikolas, Chris Sale (pictured), Daulton Varsho and Luke Voit. Many of these players will be available to draft later (or purchase for less) than our rankings suggest.

Our underlying stat projections aren’t discounted because there’s a chance that the player might not recover from injury as expected, or because he might not be called up from the minors as we expect. We project what we believe will happen, and our dollar values are directly dependent upon those projections. Readers who don’t know that could end up with all of those players on their teams – and a bunch of empty roster spots.

The players we detail below won’t be on Opening Day MLB rosters but will bring value to fantasy rosters.

Success in roto-scoring fantasy baseball ultimately comes down to team building and finding profitable opportunities. One way to find profit, albeit risky, is to draft or pickup up-and-coming prospects and injured players, and stash them in reserve (bench, injured list, or minors) until they are on the active MLB roster.

The strategy isn’t for the faint of heart. There is opportunity cost to using one of a precious few reserve slots on a player who isn’t immediately available to play, especially in a season when teams are expected to be more mindful of workloads following the 60-game campaign in 2020. Fantasy baseball league rules can also make all the difference, which is why a player like Chris Sale, whose timetable to return is somewhere around June, had an NFBC average draft position of 280 in NFBC Draft Champions leagues with 27 reserve spots but an ADP of 398 in the Main Event, where teams have a precious seven reserve spots and no injured list.

Prep for your baseball draft with Fantasy Baseball Index Cheat Sheet Updates. The March 30 edition is available now, and a final issue will be published next Tuesday, April 6. Each issue includes printer-friendly cheat sheets for 12 scoring systems, depth charts, in-depth analysis of each team, and stat projections including Year 2020 games by position.

Every league has its own unique situation, so it’s difficult to present recommendations for prospects and injured players that are uniform across all leagues. However, this post lists many players who are expected to be called up and/or miss at least one month of the 2021 MLB season, along with players who are worthy of being kept for 2022.

Of course estimated dates for call-ups and return from injury are fluid, and unexpected delays can certainly change the recommendation, but here’s what we expect as of Opening Day.

Injured Players are bold.
Prospects are in italics.