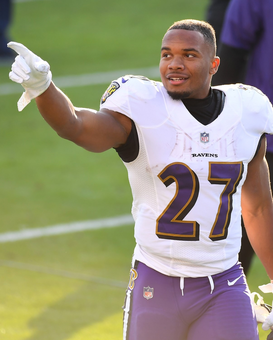 I think everyone has a good sense of who the top running backs are; it's the next tier that's hazy. Players in committees, or injury-prone, or stuck on bad teams or likely to cede passing down work. Picking the right players in those 3rd through 6th rounds of drafts can make or break a fantasy team.

An idea I'm seeing commonly discussed online is (by various names) "modified Zero RB," where maybe you draft a running back in the first round, but totally avoid the second tier of backs, favoring other positions and then scarfing up lot of backup types in later rounds. Why not draft a sure-thing wide receiver, tight end or quarterback in the 3rd or 4th round rather than select a running back who might not even get the opportunity to be featured. Forcing a pick at a certain position is a recipe for a disappointing fantasy roster.

But I think there are at least a couple backs that will be available in those rounds with a good chance of outperforming their draft position. I can't claim to be 100 percent certain -- if they were sure things, they'd be gone in the 2nd round -- but I think they're worth the risk.

One is J.K. Dobbins, and the other is David Johnson.

With Dobbins, there are two concerns. He's a little unproven, having been stuck in a committee for most of his rookie season. And even if he's more featured this year (far from certain, given the team's recent 2-year, $10 million extension for Gus Edwards) he's going to have competition for rushing touchdowns from both Edwards and Lamar Jackson. At least Mark Ingram is gone, and anything the team says to talk up Justice Hill is flatly untrue, as was proven when they also talked him up a year ago and didn't use him.

With Johnson, where to start. He's stuck on what looks like one of the league's very worst teams, might be in a committee with Phillip Lindsay, Rex Burkhead and the aforementioned Ingram, and he's 29 years old -- ancient in running back terms these days. Almost certainly Houston will have a lousy rushing offense, so not a group you want to heavily invest in.

But Ingram and Burkhead are both two years older -- one of those guys definitely isn't making the roster, and I'm not sure either will. Houston carrying a 31-year-old running back makes little sense, so surely there's an undrafted youngster they can keep instead. Johnson's contract restructure this offseason makes him very likely to stay, and start, and he's a way better pass catcher than Lindsay. He'll need to stay healthy (he's missed 3-4 games the last two seasons -- ankle, concussion, COVID list), but I don't think he's any more of an injury risk than basically any other running back.

Among the files we keep, we like to look at how players performed in the second half of the previous season -- if they were better or worse in the last eight games than the first eight games. And both Dobbins and Johnson were impressive in that regard.

Yards per attempt isn't everything, but it catches your eye when you have running backs averaging over 6.0. Both of those backs did that in the second half of the 2020 season. It was a fairly small group doing it, which also included 2,000-yard rusher Derrick Henry and standout rookie Jonathan Taylor. Table, sorted by 2nd-half yards per attempt, shows all running backs who finished the season with at least 550 total yards or 6 touchdowns.

Two other running backs in that 6.0 club, Ronald Jones and Boston Scott, look iffier. Scott, certainly, won't necessarily have much of a role in Philadelphia, which added Kerryon Johnson and Kenneth Gainwell behind Miles Sanders. Jones will likely be in a committee with Leonard Fournette and Giovani Bernard. Way less likely to be lead backs than Dobbins or Johnson.

In any case, I won't be one of the drafters avoiding Dobbins or Johnson for other positions. Not that either is a sure thing or 2nd-rounder who should be drafted over an elite wideout, but I think both are going or will go too late, and will probably end up on a few of my teams.