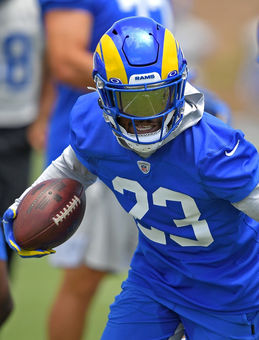 In the offseason, the Rams mortgaged their future to upgrade at quarterback, sending off two 1sts and a 3rd to dump Jared Goff's contract. They'll need Matthew Stafford to shoulder even more of the offensive burden, because they won't be as good at running back. Cam Akers tore his Achilles yesterday and is out for the season.

It's a devastating loss for the Rams, obviously, with Akers having really emerged as a star down the stretch last year (and into the playoffs). He went for 131 and a touchdown when the team upset Seattle, and was a bright spot (90 yards and a score) in the loss at Green Bay a week later. Sean McVay has been talking him up all offseason, and we were looking at him as a possible top-5 running back. That's gone now, and there aren't many (any?) big success stories of running backs returning from Achilles injuries.

Los Angeles has a bunch of unknowns on the depth chart fighting for roster spots (Xavier Jones, Jake Funk, Raymond Calais) and they could sign a veteran -- Todd Gurley's still out there, and we talked about Adrian Peterson here a couple of days ago. LeVeon Bell would be an interesting possibility, though he’s had an ice-cold market. But the favorite to be the team's lead back this year is Darrell Henderson. So let's take a look.

Henderson was a third-round pick (70th overall) in 2019. He flashed with a couple of good runs that preseason, looking like he'd quickly be a viable No. 2 and perhaps heir apparent to Gurley. A late first-round type of pick in rookie drafts that year.

But he had a hard time getting on the field that season, stuck behind Gurley and also playing behind Malcolm Brown. He didn't show the explosiveness he showed in the preseason, averaging just 3.8 yards per attempt (similar to both Brown and Gurley, with a poor line also a factor). Henderson is short (5-8, 208), which maybe contributed to them not trusting him in pass protection. And the following April, the team drafted Akers in the 2nd round, and he took over the backfield by midseason.

While Henderson was surpassed by Akers in 2020, he had a credible season -- better than as a rookie. He averaged 4.5 yards per attempt (better than Akers, at 4.3, and the since departed Brown, 4.1), and 52 total yards per game (42 run, 10 rec), with 6 TDs. Looked like a viable No. 2 to select in the middle rounds of fantasy drafts in to possibly be a quality starter if injuries struck. Injury has struck.

As it turns out we've got a good six games to work with from last year of Henderson without Akers around. Three games he missed entirely due to injury, one he was knocked out of, and two where he was active but didn't touch the ball. Here's Henderson in those games.

So Henderson rushed for 60-plus yards in all but one of those contests, and was over 5.0 yards per attempt in four of six. Caught 6 of the 9 passes thrown his way.

Bell, Gurley, Peterson, Duke Johnson, and any other veteran running back you want to think of is available for a reason. The Rams aren't trading for anyone notable either. Henderson should be their guy. I think he did pretty well in this offense a year ago, and should do well in 2021 for as long as he stays healthy.

Quick look at the PPR rankings in the magazine, I think Henderson slots in somewhere around 16-17 -- after Antonio Gibson, but with more upside than the next few backs. Similar to Clyde Edwards-Helaire. I don't know if some will like him even more than that (let's see who the Rams sign as their No. 2), but I could see him being available around there.

Older
More Around the NFL
Newer