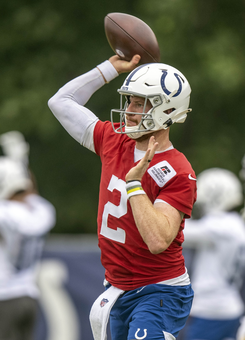 Carson Wentz left practice yesterday with a foot injury. There have been various reports about how serious it is (one report says "not season-ending," which is difficult to view as a positive in July), and he's seeing a foot specialist. The Colts are bracing themselves for surgery. Seems likely he'll miss regular-season games -- maybe a good chunk of them.

We've talked a lot about Wentz here, both good (he's been a really effective passer near the goal line) and bad (last year he nearly achieved the Triple Crown of ugliness, leading the league in sacks and interceptions and coming in 2nd in fumbles). But reuniting with former coordinator Frank Reich and working behind one of the league's best offensive lines looked like a nice spot for a rebound. Now it seems like he'll be shelved at the start of the season, and that will be on hold.

It's been a rough offseason for former top draft pick quarterbacks. The Eagles shipped out Wentz, and Jared Goff was traded in what was primarily a salary dump. That's continuing a recent trend in which quarterbacks taken at the top of drafts are kicked to the curb a few years later. And it's not only recently that most of those guys have disappointed.

A year ago, of course, another pair of quarterbacks recently drafted 1-2 were dumped by their teams. Jameis Winston was replaced in Tampa Bay, and Marcus Mariota dumped by Tennessee. Going back even further, we're looking at close to 30 years of quarterbacks selected with top-5 picks generally failing to live up to expectations.

The table below shows all quarterbacks selected in the top 5 of the NFL Draft since 1990. There have been 38 such players. Leaving out the five most recent selections, who it's too early to safely judge, more than half (18) of the 33 can fairly be called disappointments -- either out-and-out busts, or guys their teams moved on from fairly quickly, who didn't do much. I'm putting Goff and Wentz in that group, but it's not too late for them to have successful careers.

The 15 best of those quarterbacks, so far, are in bold.

Winning Super Bowls hasn't been so easy the last two decades, with a former 6th-round pick accounting for a third of them. But you'd expect more than 4 total rings from top-5 picks in a 30-year period.

In fantasy terms, results haven't been quite that bad. Of the 38 quarterbacks selected in the top 5 since 1990, 23 of them have had at least one season where they ranked among the top 10 at their position. So most of them have produced good numbers at one point or another. (That includes Blake Bortles, so fantasy success doesn't always equate to NFL excellence.) And as noted, about a quarter of them (9) have taken teams to Super Bowls, even though the Mannings were the only ones to win them.

As for the Colts, unless they sign someone, they'll be looking at Jacob Eason as their starter until Wentz is healthy. Eason, a 2020 fourth-round pick, is a big (6-6, 231), immobile pocket passer who initially started for Georgia before transferring to Washington and having a fairly modest season (23 TDs and 8 interceptions for an 8-5 team) before surprisingly declaring early. We'll get a look at him in the preseason; too soon to say whether Indianapolis will go into the season with him as their starter. (Blake Bortles, recently released by Green Bay, is available.)