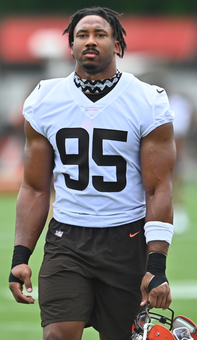 Ravens, Browns defenses should be helped by schedules

With defenses, there’s the strength of the unit, but there’s also the opponent they’re playing – some give up a lot more sacks and turnovers than others. So I like to incorporate Strength of Schedule when assessing this position.

According to my spit-balled projections, Baltimore, Cleveland, Buffalo, San Francisco and Green Bay look like the notable defenses that should be helped along by playing more games against lesser offenses.

The Rams, Vikings, Cowboys, Broncos and Kansas City, on the other hand, look like the best defenses that will be kind of swimming upstream – facing more opponents who don’t tend to make those mistakes.

The next step is to take those numbers and fold them into the 2022 schedule. I set aside the last game for each team (most fantasy leagues are done at that time). If we take the above numbers and assume that’s what the offenses are about, it paints a picture of which defenses should see the easiest schedules.

And there are the Ravens and Browns (led by Myles Garrett) sitting at the top. The Falcons are in the No. 3 spot, but they’re probably going to have a pretty dreadful defense – nobody should be selecting Atlanta because of schedules. (The numbers below show averages for opponents – they are not a projection of how I think defenses will perform.)

These numbers suggest that if you were torn between San Francisco and Dallas, you should go with the 49ers – with them having the much more favorable schedule.

For those looking for a defense that will tend to be better early in the season, the first-half numbers appear below – the numbers for the first eight games for each team. They show the 49ers, Browns and Packers with the most favorable schedules early.

The Rams, note, are also up there (4th). Recall that Los Angeles ranked next-to-last in the season-long look – it’s getting the bulk of its difficult opponents late in the year.

Buffalo, on the other hand, had a favorable overall schedule but slots into the bottom-5 in this first-half chart.