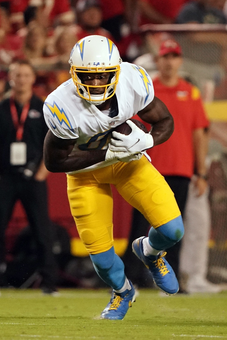 Nice when a game mostly lives up to the expectations. We didn't get the 38-35 shootout some were hoping for, and indeed the KC numbers were disappointing (defensive touchdowns sometimes do that). But plenty of drama and controversy in what will probably be one of the better Thursday night affairs.

First thing to say is that both of these defenses have some ability, improved over last year (when both ranked in the bottom 10 in yards allowed, and only three teams allowed more points than the Chargers). There was a stat showing that Kansas City punted more times in the first half (4) than in any previous Mahomes game.

But until the Chargers lost a couple of linemen to injury, Justin Herbert wasn't getting a ton of pressure, and the Chargers were moving the ball very well. Herbert made a few incredible throws, including the touchdown to Mike Williams and a couple of lasers to DeAndre Carter, one while dealing with some sort of rib injury.

Anyone strictly looking at the box score might say, Well, he lost the game with that Pick Six. But I (and I think most) put that one largely on the coaching staff, which went hurry-up for some reason on 1st and goal, ignoring a gassed Gerald Everett's plea for a breather. Not only did they not take Everett out, the play went to him, and he ran a soft/wrong route that produced the 99-yard touchdown the other way. I'm not trying to absolve Herbert from blame, but Everett was clearly not where he was supposed to be (which in his mind was on the sidelines). Herbert then picked up some kind of rib injury, which will be updated at some point today one hopes. I have Herbert in a couple of leagues (he was our top quarterback) and grudgingly added a third quarterback this morning just in case he needs to miss time.

Patrick Mahomes was under heavy pressure early on, taking a big sack and settling for a couple of shorter throws. His first touchdown, dependent on a nifty scramble, was the kind of play not many quarterbacks make, and the second was a laser to Justin Watson, checking into the game while Mecole Hardman was having an injury checked out. Final numbers disappointing (235 yards, 2 TDs), but I think this aggressively improved Chargers defense, as long as it can keep Joey Bosa and Khalil Mack on the field, is going to hold a lot of quarterbacks to a lot less than that.

Even before he busted the game-clinching 52-yard run (at the end of which he shrewdly stayed in bounds, impressive), Clyde Edwards-Helaire was having an impressive game. It became clear in August that Kansas City was going to give him a chance to be The Guy (sorry, Ronald Jones fans), and so far, so good. He had a couple of tackle-breaking runs and is showing some nice balance and power thus far. Caught all 4 passes thrown his way for 44 yards, unfortunately missing out on the touchdown catch that Jerick McKinnon got on a broken play. McKinnon actually played a few more snaps, but CEH had twice as many touches. It's a committee, but if one guy puts up good numbers without scoring and the other guy needs to score to be usable, it's clear who the best fantasy option is. I hope nobody started Isiah Pacheco, overlooking that his numbers last week were in garbage time.

Austin Ekeler looked fine, on most of his chances. Yeah, he averaged just 2.8 yards per attempt as a runner. This is not a running team, especially with Corey Linsley getting hurt in the first half. And nearly half of Ekeler's 9 catches were on the final drive, with Kansas City giving up underneath stuff. The concern through 2 games is that it seems the Chargers are going to be working to keep Ekeler fresh by giving more snaps to Joshua Kelley and Sony Michel. It's smart, it's a long season, but it will also reduce the benefits of starting Ekeler each week. Regardless, no one should really be complaining about 18 PPR points.

Initially, I started Mike Williams in my Fantasy Index Blackout lineup. Alas, with none of the superstars blacked out, I ended up replacing him with a respectable trio of Kupp, Jefferson and Adams. Maybe all three of those guys will be better than Williams, maybe not. But he was pretty awesome, including a really impressive touchdown catch. Going forward I'd say he's an automatic start any time Keenan Allen is sidelined, and in most leagues probably automatic even if Allen is playing. Great game.

Nice adjustment by Josh Palmer on the late touchdown. Would have been his second straight disappointing game otherwise, but 8 targets is nice. DeAndre Carter also got free for a remarkable 35-yard catch later, but otherwise a quiet game. He can play the position, but he's not Keenan Allen and can't be used with that kind of production in mind.

Not sure what to say about JuJu Smith-Schuster, Marquez Valdes-Scantling and Mecole Hardman. The JuJu outing is particularly disappointing, given our high ranking, and his healthy target share in Week 1. We were warned by Mahomes himself, it's going to be a bumpy ride with these guys. Fair to wonder if Justin Watson, who ran a great route on his touchdown when replacing Hardman, is better than a couple of these guys right now. Actually I think he probably is better than Hardman and MVS at a minimum. We're going to need Mahomes throwing for 350, which he certainly will in a lot of games, for multiple wideouts to hit in this offense.

Travis Kelce disappointed, but I saw a couple of plays, one where he spun out of a tackle after a reception to pick up a first down, where I'm not the least concerned that age is going to be an issue for him. The guy is great, and he's still great. You want more than 5 for 51, but next week he might very well catch 10-11 passes. There was a goal-line sequence where both Kelce and Jody Fortson saw passes from the 1-yard line. Fortson looks like he might catch 5-6 TDs this year, but only a handful of other passes, unfortunately. Kansas City curiously settled for a field goal after those plays, kind of weird. But it worked out, so I guess nice coaching.

Might need to give more credence to the idea of Gerald Everett being a season-long factor. Though he and Tre McKitty caught the same number of passes in Week 1, last night Everett had 10 targets to McKitty's zip. My apologies to those I steered away from Everett. Eventually Donald Parham will return and maybe Keenan Allen returning also causes Everett's targets to decline, but a big part of the offense last night. Yeah, he was at least partially at fault for the game-losing interception, but it's not like he didn't try to come out of the game before it could happen.

I missed the first couple of minutes of this game because silly me, I was watching the NFL Network pre-game and thought it was their mistake when they began showing a replay of the Broncos-Seahawks eyesore from the other night. Last night's game (all Thursday games? I guess) was on Amazon Prime, as we were reminded later by the shot of Jeff Bezos and Roger Goodell rubbing elbows in the audience. Only negative from my standpoint is I usually record these games so I can refer to back to plays and I don't have the faintest idea how to record things on Amazon Prime, if it's possible at all. Yes, I can watch it on the Internet, sometimes I like sitting on my couch with an adult beverage, sue me.

At one point I had the Chargers defense as a top 5 group, most recently I had them around 8-12, depending on scoring system. I think top 5 might be more accurate. This is a really talented group that's going to cause problems for quarterbacks not named Patrick Mahomes.

Fingers crossed that the Herbert injury isn't serious and doesn't cost him time. Not only are the NFL and fantasy hopes of all Chargers dependent on it, but the guy is fun to watch.