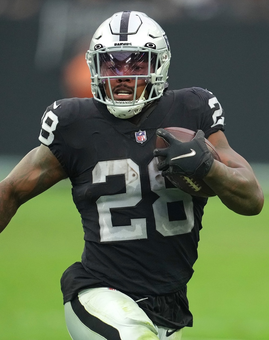 Josh Jacobs is putting together a real nice contract drive. He’s also running his way to heights reached by only a few backs.

Jacobs has run for at least 140 yards in three straight games (against Denver, Kansas City and Houston). That’s been done by only 16 other running backs in the modern era. Only two others have done it in the past 15 years – Adrian Peterson and Derrick Henry.

With luck, Jacobs will stay healthy and it will all pay off nicely for him, signing a big contract in the offseason (though with the structure of the labor agreement, the Raiders may opt to lock him down with the franchise tag, allowing them to pay him less than a bunch of other lesser players at other positions who are free to auction off their services).

Looking at past running backs who’ve gone over 140 yards in three straight games, it doesn’t seem like Jacobs will make a serious run at making it four in a row. Only two have pulled that off – 1974 Otis Armstrong and 1980 Earl Campbell.

Collectively, the previous 17 running backs averaged 25 carries for 99 yards, with 14 TDs in those next games. Just under half ran for 100 yards.

Whenever a running back starts putting together a streak of games, he becomes more of a priority for opponents, and that’s reflected in the numbers. Of these 17 backs, 10 averaged fewer than 4.0 yards per carry.

My leaning is that the Raiders probably will change things up this week, with more passing and less running. I’m not suggesting anyone should sit down Jacobs, but I don’t think he’s making a serious run at another huge game.

Note in the above chart that for O.J. Simpson and Emmitt Smith, those are Week 1 and Week 2 games. (Simpson closed 1976 with 3 big games, while Smith had two big games at the end of 1993 and then another in his 1994 opener).

Note that for Otis Armstrong’s four-game streak, the last game came in the final week of the season (he didn’t get the opportunity to stay hot).

With Earl Campbell in 1980, he followed his four-game streak by running for 130 and 206 in his next two games – a remarkable six-game stretch.

Similarly, Larry Johnson followed his three-game streak for Kansas City by running for 131 and 201 yards in his next two.

For all players, I’m showing rushing stats only (even for the touchdowns).