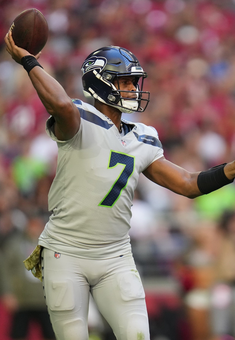 Seahawks vs. Bucs in Germany: Game starts at 9:30 a.m. Eastern time. Not any significant injuries involving people who should be starting. Cameron Brate might play, but if the Bucs put him ahead of Cade Otton at this point it would be surprising. No Russell Gage, but he presumably isn't even rostered anywhere at this point. Main wideouts for both teams look fine, Kenneth Walker for Seattle (Leonard Fournette a sketchier choice these days).

Vikings at Bills: So, Josh Allen. I have no inside information. It sounds like he's not playing, and it will be Case Keenum at quarterback. For me this would not really affect my willingness to use the Bills I'd be using anyway: Diggs, Knox, Singletary. If Allen is active, I'd use him, unless I had an unusually strong alternative. For Minnesota, Cook and Jefferson and Hockenson, despite the tough matchup.

Lions at Bears: I'm using D'Andre Swift this week. I think he might get a little more work, and it's a good matchup for the ground game. Bears offense should be solid, matchup is great, but Fields seems like the only sure thing for the way he's running the football (running back committee, still can't count on regular passing yielding big results for Mooney, Kmet).

Browns at Dolphins: No David Njoku, Browns otherwise healthy. But only Chubb and Cooper look like solid options. For Dolphins, they have this weird thing where they've been putting up their best numbers in road games. Matchups are part of it, I think they'll put up strong production against a Browns defense that just hasn't been very good. Tua, main wideouts obviously, the even running back committee a little harder to buy into.

Texans at Giants: Dameon Pierce and Saquon Barkley, let's go! Daniel Jones too. Nothing else to see here.

Saints at Steelers: Alvin Kamara yes. With the Steelers, there has been some talk that it could be more of a Najee Harris and Jaylen Warren committee. I think Warren should be rostered, and I'm not thrilled about using Harris, but I also don't have much choice in the league I have him in. Chris Olave and the main Steelers pass catchers look fine.

Broncos at Titans: There's a certain comfort level with the Titans these days. Teams can't run on them, they have to pass, and are usually fairly productive. So I wouldn't touch any of the Broncos backs, and I'm interested in Russell Wilson and his main receivers -- Jeudy, Sutton and Dulcich. The other comfort level with the Titans thing is you start Derrick Henry and their defense and maybe their kicker, and that be it. Easy.

Colts at Raiders: Jonathan Taylor is back, may as well start your No. 1 overall pick, even knowing he probably won't deserve it at any point the rest of the way. Josh Jacobs too. I'm benching Michael Pittman just because I'm tired of him, but he's ranked nice and high, the matchup is fine. I'm not expecting much out of the Jeff Saturday era, but I guess anything is possible. Davante Adams obviously, Foster Moreau your serviceable fill-in at tight end (but he's no Darren Waller).

Cowboys at Packers: I probably shouldn't take as much pleasure out of Aaron Rodgers' collapse as I have been. What can I say, I never cared for the guy. At least he doesn't steal money from welfare recipients I suppose. Aaron Jones is healthy and I'd start him, and I'm using Allen Lazard. After losing because I didn't use him last week. For Dallas we love Pollard if Elliott doesn't play and still like him if he does. I'm in on Dalton Schultz in a league, though we're a little cool on the Dallas passing game in general. Of all the surprises in the 2022 season, is there a bigger one than Green Bay being 3-6? Seattle being 6-3 maybe, but I'll go with the Packers as the biggest.

Cardinals at Rams: This one is tough. Cardinals are down three offensive linemen, and their running quarterback has a hamstring injury. And they're facing a tough defense that normally frustrates him. So I guess steer clear of Kyler Murray even if active, but I'd still use DeAndre Hopkins and Zach Ertz. For the Rams, they might not have Matthew Stafford, making it easy to start no one but Cooper Kupp.

Chargers at 49ers: No Mike Williams or Keenan Allen, so it will be the Josh Palmer, DeAndre Carter and Michael Bandy show, Gerald Everett too I guess, against a good 49ers defense (but one that's shown occasional vulnerability to the pass, due to injuries). Chargers defense has been down bad, so thumbs up on McCaffrey, Deebo, Aiyuk and Kittle. Maybe even Jimmy G, what the hell.

Commanders at Eagles: Starting Eagles and not starting players going against the Eagles looks like a pretty good strategy these days. Terry McLaurin might be the only viable Washington player. I feel like this will be a one-sided Monday night game, but sometimes we get surprises. Probably not here.