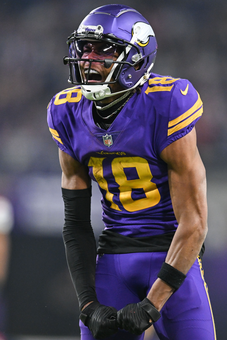 Lots of offense on Turkey Day

So I spent Thanksgiving with the flu, my first time being sick in, oh, a couple of years now. But the good news is that with no family or friends around to talk to me or anything, I was able to watch 11 straight hours (were those games long or what?) of football, and bring the highlights to you.

We did a factoid about how there's not usually more scoring on Thanksgiving than any other day, and I've done similar ones in the past. In my childhood memory there were a lot of slugfests, but my childhood memory was the 80s and there were lots of high-scoring games that stick in the mind in general -- I was a Packers fan, and it seems like Dickey-Lofton-Jefferson-Coffman were engaging in 50-48 and 48-47 games every other week. But anyway, yesterday featured more scoring than was expected, particularly considering half of the six teams playing rank in the top 5 in scoring defense. But lots of overs were hit, and lots of good fantasy choices.

Bills 28, Lions 25. Hats off to the Lions, who've clearly bought into Dan Campbell, and have also managed to build things the right way -- offensive line, and a few choice skill players that they've hit on. It could be argued that this team could have been even more of a legit playoff contender with Matthew Stafford, since Detroit clearly has way better running backs and an offensive line than anything the Rams have been able to put on the field this year (or last, really). Jared Goff has been decent, but whenever I watch him I also see why Sean McVay was ready to move on. He doesn't take many sacks, but some of that is him just throwing it away rather than waiting a little longer for plays to develop that are sometimes going to be there, but he gives up on.

Anyway, the Lions moved the ball all day against a really good Bills defense. Von Miller got hurt early, which helped, but the Lions did a good job running the ball, getting Amon-Ra St. Brown open, and also getting useful production from Kalif Raymond and even DJ Chark. D'Andre Swift isn't playing enough, but they're using him a lot in key situations, including near the goal line. I didn't start him or recommend him, but he was unlucky to have one touchdown (correctly) overturned by replay, and lost another on a drop near the goal line.

The Detroit defense is suddenly playing better. For about a half, as Josh Allen struggled passing the ball, throwing stuff at Stefon Diggs' feet and all, I wondered if his elbow was bothering him. But he heated up in the second half, with the perfect touchdown throw to Diggs followed by the incredible throw and Diggs catch in the final seconds to set up the winning field goal. Devin Singletary didn't score, costing me a parlay, but he played the most -- very little James Cook, and I honestly have no idea why they traded for Nyheim Hines only to not use him. The guy can play, what's up with his absence? The offense can't be that complex.

Cowboys 28, Giants 20. This was more of a so-so game, I suppose, with the Giants defense making some plays and controlling things early, but their offense not doing enough to really make it look like they'd hold on. Ezekiel Elliott scoring on Thanksgiving was not surprising, but him being the one averaging 5.8 per attempt while Tony Pollard was down at 3.3 was. The lack of usage of Pollard in the passing game, meanwhile, was what was frustrating and hard to explain. They instead featured their tight ends (not in the first half, worryingly, but extensively after that), and the Giants couldn't stop it. Dak Prescott made some strong throws, CeeDee Lamb shook off an early funk to finish with solid numbers, Michael Gallup had his best game. Dallas is going to the playoffs.

The Giants look like they're probably headed for 9-8 or something. I don't think Daniel Jones is good enough. Granted he's working with a very poor receiving corps right now, arguably the worst in the league. Maybe if you put Odell Beckham or a capable tight end on the field he'd deliver good numbers. But I don't think there's enough there in Jones himself, and New York will be looking to upgrade next season. I will note that he got kind of robbed on an early touchdown to Isaiah Hodgins, with an ineligible man downfield penalty that I wouldn't mind seeing done away with.

Vikings 33, Patriots 26. Worst part of this game for me was I had 7-7 in a square pool, and in the final minutes of the first quarter it was going to win if Cousins had merely thrown an incompletion on 3rd and 10 at the Patriots 45. Or if his bonehead interception merely hadn't been run back 50ish yards to set the Patriots up for a field goal. Yeah, no one cares. Only money. Anyway, it was surprising the way this game went, with Minnesota lighting up the Patriots excellent defense, and Mac Jones throwing for 382 yards -- anyone? I knew the Minnesota defense gave up plenty of yards, just didn't anticipate the Patriots deciding, they're much weaker against the pass than the run, let's attack that way. So Damien Harris was a superflop even before getting hurt (hope you started Cordarrelle instead, Jack), and Rhamondre Stevenson, Nelson Agholor and other pass catchers put up serviceable numbers.

Presumably Bill Belichick still stewing about the Patriots giving away 4 points right before the half. Hunter Henry caught a pass near the sideline with a minute left and turned up field, which was OK, but also let himself get tackled in-bounds, which was idiotic, forcing the Pats to waste a timeout. A little later, with no timeouts, Mac Jones scrambled and slid rather than heaving the ball into the stands, costing New England at least one more play and maybe two. I thought he might get benched for Bailey Zappe right there. Dumb football. Hunter Henry did later score, AND got robbed of a touchdown on a typical inconsistent from week to week call.

Justin Jefferson lit it up, of course, and Adam Thielen and T.J. Hockenson also had good games and scored. The New England pass defense did not come to play its best. Dalvin Cook had trouble finding running room, predictably. Jakobi Meyers left early with an injury, causing a great deal of Twitter anger from people who bet the over on him, but he returned, and hit that yardage number on a meaningless final play as time ran out. That's it for this week's edition of Gambler's Corner. Please bet responsibly.

So good days for Bills, Vikings and Cowboys fans. Some soul-searching, perhaps, for Giants fans, and I think the Patriots still look like a potential playoff team. The Lions? Well, they're better than anyone expected. I'll ask the Lions fan across the street to be sure, but I think most should be fairly happy with what they're seeing. Add an impact pass rusher and linebacker in the offseason, and who knows.