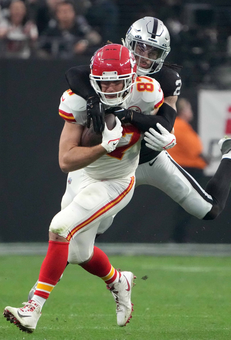 Snapshot previews of all four games

An upset or two would not be surprising

Every Saturday morning, I'll take a quick look at all the week's games, offering my own brief take on what I think will happen, as well as touching on significant injury news since our Weekly came out. I'll check in over the course of the day to answer questions, too.

What follows is a brief look at all the games with how I'd react in my own lineups to injury developments or other news. The official rankings are the ones in the Weekly. Those take precedence. But sometimes players are very close, and in those cases I'm glad to offer opinions on how I'd approach those situations. Sometimes I like certain players more or less than Ian, and sometimes I have different risk tolerance with injuries etc.

Somebody asked me last night which of the four point spreads this weekend I like most. I didn't really have a good answer. I went with Jacksonville-Kansas City, just because it's the biggest; I don't think the Jaguars will win, but maybe they get a backdoor cover in a 30-23 type of game. Last weekend, with the Dolphins giving the Bills all they could handle and the Ravens all but winning in Cincinnati with a 98-yard fumble return the difference, has shaken my faith in what could be counted on. Upsets can't be seen as surprising right now.

Jaguars at Kansas City: In general, the history of Andy Reid teams after a bye and Mahomes in these initial playoff games has me fairly confident Kansas City is going to win and score plenty of points in this game. There's just nothing impressive about the Jacksonville defense, which the Chargers completely let off the hook last week by going to sleep in the second half of their wild-card game. I think Mahomes and his main targets will be very good and their offense will score plenty, and Jacksonville just isn't that efficient. They'll score plenty of points, and I like Lawrence and his main receivers, but not enough to actually get the upset. I can't rule it out -- maybe Lawrence comes through with a perfect, transcendent game, and Kansas City's defense has its latest flop -- but I wouldn't bet it.

I'm avoiding the conventional running backs, so Isiah Pacheco and also Travis Etienne. Both teams should be passing more, and Jacksonville for whatever reason never featured Etienne in the passing game. There will be some production, but not enough for me to start him. I'll go with that above-mentioned score or close to it: 31-23, Kansas City.

Giants at Eagles: I live in New York, so of course there's a lot of enthusiasm and optimism about the Giants springing the upset. Ian's preview in the Weekly, however, sort of dismissed the chances of New York coming close to winning this game. The game a month ago was an Eagles blowout. The game two weeks ago was a closer game, even with the Giants holding out a lot of key starters on both sides of the ball. So there are avenues for both possibilities to be considered: Eagles blowout, Giants upset.

I'm instead expecting an Eagles win, with the run game working, both Miles Sanders and Jalen Hurts. Their defense should definitely cause problems at times for Daniel Jones and company; all of the nice things pointed out about Jones' last month to six weeks or so need to qualify that a little by pointing out he played two games against maybe/probably the league's worst defense in Minnesota. New York's own defense had its moments but seldom shut down a good offense. I'd use Barkley and probably Jones and am using Richie James, as mentioned elsewhere. But in general there should be too much Philly. Eagles 26, Giants 20.

Bengals at Bills: Apparently snow might be a factor in this game. I noticed that wind doesn't look too bad, at least; snowing but not blizzard-like conditions, or huge snowdrifts shutting down passing games or anything. And both teams are better passing the ball than running it, so I'm not expecting a conservative, run-focused game, but rather more of the usual from both offenses, with it maybe being a little more difficult at times. But guys like Allen, Burrow, Chase, Diggs, I'm still starting them. I don't expect either Joe Mixon or the Bills committee to run wild.

Cincinnati looked like the better team down the stretch. All the talk about whether this should actually be a neutral field game or not, to me, places a little bit too much importance on homefield to these outcomes. It didn't matter to the Bengals during last year's Super Bowl run. I always think of the quote I heard from some Celtic as a kid about playing on the road: "In all my years of playing basketball I've never seen a fan come out of the stands to block a shot." The Bengals can win this game. They've got some offensive line issues, which is a concern, but the Bills pass rush hasn't been the same since losing Von Miller. Given the defensive injuries Buffalo has sustained along the way, I think Cincinnati probably has the better all-around team right now.

And I'm going to go along with that, even though my playoff fantasy teams would be better off if the Bills won. Seeing Miami take Buffalo down to the wire last week was sobering. I'm going Bengals 27, Bills 24, in what should be the game of the week.

Cowboys at 49ers: I'm still feeling the sting of thinking the crummy, 8-9 Bucs would actually beat the 12-5 Cowboys last week; instead it was one of the bigger playoff mismatches I can remember. Meanwhile San Francisco looked pretty vulnerable in the first half against Seattle last week. So maybe if Dallas moves the ball early and jumps out to like a 17-7 lead or something, we start to see just how good Brock Purdy and the 49ers offense actually are with some pressure put on them. San Francisco's run defense is maybe the league's best but its pass defense made Jarrett Stidham look like a star a couple of weeks ago, so clearly there are significant holes that can be exploited. If Dak Prescott comes out playing at the level he did a week ago, game on.

But I think San Francisco's offense is too good and with too many weapons to be contained that much (this is the only one of the four games where I looked at the over-under of 45.5 and thought it was definitely too low). With a healthy Deebo Samuel and Christian McCaffrey, and their various other targets, I don't seeing them being held off the scoreboard early or often. I think Dallas' passing game should be solid and maybe their defense gets a stop or two, but I just think there's too much of San Francisco to keep them from moving on (and they remain my pick in the NFC). I'll go 49ers 27, Cowboys 23.