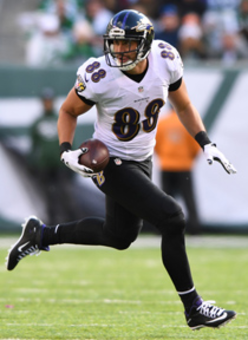 Pitta, Maclin out; who's in?

Dynasty leagues make fantasy football a year-round pursuit, which is a large part of the appeal. In your standard yearly league NFL roster moves in June are just things to file away for August drafts. In dynasty, it's time to hustle to the waiver wire and add the Next Big Thing.

Dennis Pitta was in line to be Baltimore's main tight end (significant; he caught 86 passes a year ago), but now his career might be over after his third hip injury. Baltimore has a bunch of other tight ends on the roster, each who might be in line to be the No. 1 in Pitta's absence.

Arguably more surprising than Pitta getting injured, Kansas City released Jeremy Maclin yesterday. That's apparently a cap-driven move that frees up $10 million in cap space for the team. Suddenly the roster has Tyreek Hill and not much else at wide receiver.

In my dynasty league with a currently open waiver wire, every other tight end on Baltimore's roster was available. Benjamin Watson, Crockett Gillmore, Nick Boyle, Maxx Williams and Darren Waller. Watson, Gillmore and Boyle are the in-line type options and Williams and Waller the better bets for pass catchers.

But all have significant flaws. Watson is 36 and coming off an Achilles injury. Maybe he has a good year in that body, but devoting a dynasty roster spot to a 36-year-old tight end looks like bad business. Williams is also coming off knee surgery and to this point has been a bust. Waller is currently hurt, Boyle and Gillmore haven't done much.

Somebody grabbed Williams while I was still debating. I took Waller, without much enthusiasm. Tight end receptions are 1.5 points in this league.

Ultimately, I'm not sure you can make a strong case for adding any of these players -- which is why I dropped Waller a few hours later to pick up Kansas City fourth-round wide receiver Jehu Chesson.

According to this story, Maclin looked good at OTAs. Seems to be strictly a cap move, with the team needing the space just to sign their draft picks. With Maclin gone, the top two wideouts are Tyreek Hill, clearly, and probably Chris Conley.

But it's hard to get excited about Conley, who's entering his third season and been pretty forgettable thus far. He started 11 games a year ago, playing in all 16, and caught 44 passes without scoring. He's a former third-round pick. Even less appealing is Albert Wilson, who also played in all 16 games last year, with 5 starts. He turned that workload into 31 receptions for 279 yards.

So setting aside those two veterans, let's look at a pair of fourth-rounders: 2016 pick Demarcus Robinson, 2017 pick Jehu Chesson. Robinson's an excellent athlete who nonetheless ran only a 4.59 at the combine, but had some off-field concerns at Florida (including suspensions) and was limited to special teams last season.

But if we're going to be looking at nobody mid-round youngsters, I'm rolling with Chesson. Consider: Kansas City traded up in the draft to select him, surrendering a fifth-round pick to Minnesota. He's faster (4.47), and was better in 2015 at Michigan. He caught 5 balls for 118 yards and a touchdown in a Citrus Bowl win, but injured a knee in that game.

That injury may have bothered him as a senior, since he didn't have a great season (50-764-9 as a junior, 35-500-2 as a senior). But Kansas City obviously liked him enough based on the junior numbers to trade up for him.

To be clear, no one should be grabbing any of these youngsters with the idea they'll likely light things up in 2017. Kansas City's passing game will go through Travis Kelce, Hill and the running backs, with whoever wins that job across from them being a bit player.

But we'll see. There's opportunity for another wide receiver to take on a large role, if not right away than down the road. If you're in a dynasty league with an open waiver wire, now's the time to take a shot with somebody. Tomorrow will be too late.