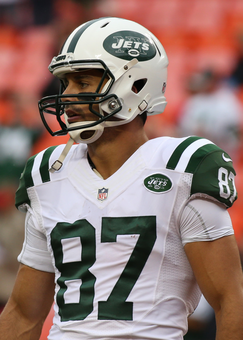 Decker won't be last big name to be released

The Jets are releasing Eric Decker. Apparently they’ll hang onto him for a few days, seeing if they can trade him, but nobody’s interested in paying him $7.25 million for the 2017 season.

Decker will be released, and then he’ll sign with him some other team, probably as a starter, but maybe as a third receiver.

The Bills and Ravens appear to be the teams most interested in signing a wide receiver. But there are other options available. Jeremy Maclin probably leading the way, and Anquan Boldin wants to play another season.

Decker won’t be the last player released before opening day. A look at five more who might be axed:

Allen Hurns, Jaguars: Jacksonville made the mistake of signing Hurns to a five-year contract worth $40.6 million last year. He’s due to make $7 million this season, which is over twice as much as than the combined total of three teammates who are probably all better than him. Allen Robinson is definitely their No. 1 receiver. Marqise Lee is probably their No. 2 – he outplayed Hurns last year. Both Robinson and Lee are former second-round picks entering the final years of their rookie contracts. And the Jaguars drafted Dede Westbrook in the fourth round (a player who would have gone a round or two earlier if not for a knucklehead component). Hurns is a decent player. Would be a starter or No. 3 receiver on most teams. But it’s unusual for a team to pay $7 million to a spot-duty player, making me think the Jaguars will move him.

Doug Martin, Bucs: Martin signed a big contract after playing well in 2015, but he was terrible last year, averaging only 2.9 yards per carry. The season ended with him getting slapped with a four-game suspension for violating the league’s substance abuse policy (which will carry over and sideline him for the first three weeks of this season). He’s not worth $7 million for 2017, and with that drug violation, the Bucs have the ability to release him and get out of that contract. They have plenty of other running backs. Jacquizz Rodgers is very much a journeyman, but I thought he was better than Martin late last year. Charles Sims is a good third-down back. They drafted Jeremy McNichols in the fifth round.

Ryan Mathews, Eagles: Mathews is due $4 million in the final year of his contract. He’s not worth that to the Eagles, who have moved on at the position. They signed LeGarrette Blount, and they’ll mix in Darren Sproles and youngsters Wendell Smallwood and Donnel Pumphrey. I have seen multiple reports suggesting Philadelphia is waiting for Mathews to be able to pass a team physical after undergoing offseason neck surgery. He will be released at that time. Could land as a backup running back somewhere.

Randall Cobb, Packers: I don’t expect the Packers will release Cobb, but it wouldn’t surprise me. This is the team that cut Pro Bowl guard Josh Sitton just before opening day last year. Cobb is halfway through a four-year contract worth $40 million, and he’s not worth that kind of money now. Two years in a row he’s struggled. The passing game really fell apart two years ago, when Jordy Nelson was out. Cobb’s just not as fast and explosive as he was early in his career. Back in his first two seasons, he scored 3 TDs on kick returns of 75-plus yards. He’s not that guy anymore. He’s averaged only 10.4 yards per catch over the last two years, 3rd-worst among the 40 players who’ve caught at least 100 passes. When he sat out Week 17 last year, I didn’t think they missed him much, with Geronimo Allison filling in. He rebounded some the postseason, with 18 catches for 260 yards in three games (with 3 TDs against the Giants). I guess they keep him, but let’s see what their young receivers look like in the preseason.

Chris Ivory, Jaguars: Ivory runs hard and tries hard, but he became obsolete when the Jaguars drafted Leonard Fournette. Jacksonville also has T.J. Yeldon, and he’s a much better fit as their second running back. He’s younger, a much better pass catcher and is still on his cap-friendly rookie contract. Ivory signed a five-year contract worth $32 million a year ago. He’s due $4.5 million this year. He’s not worth that kind of money, so I expect he’ll be gone before the season starts. Probably will land a backup job somewhere.