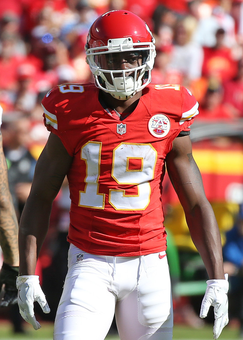 The Ravens have landed Jeremy Maclin. Now what do we make of their receiving corps? Dennis Pitta led them with 86 catches last year, but his career is likely over. Maclin, Mike Wallace and Breshad Perriman project to be their top three wide receivers, but in what order?

The team has averaged 278 and 271 passing yards the last two years, with 21 and 20 touchdown passes. That production comes with the team shockingly attempting more passes than anyone else (even the Saints), up at 42 attempts per game.

I don’t think the Ravens will pass for that many yards again. They have some offensive line problems, and I believe they’d like to do a better job of running the ball. So I’m thinking more along the lines of 255 passing yards per game. Joe Flacco has never been a great touchdown thrower, so perhaps 21-22 TDs. That, in general, is the size of the pie we’re working with – those are the stats to be divided amongst the various pass catchers.

A look at the main receiving options in the offense:

RB Danny Woodhead: He caught 80 passes two years ago in San Diego. If he can stay healthy (he’s a 32-year-old who’s missed most of his last two other seasons) he’ll probably catch 60-plus passes. The dumpoff ball is big in this offense; the Ravens completed 118 passes to running backs last year, 2nd-most in the league. Woodhead is a better pass catcher than their other tailbacks, Terrance West and Kenneth Dixon. (Dixon was very good receiving back at Louisiana Tech, so I expect he’ll come on this year.)

WR Jeremy Maclin: He was good two years ago, catching 87 passes for 1,088 yards and 8 TDs. He was Kansas City’s featured receiver that year – they were designing plays to get him the ball. He was not as effective last year, and Kansas City decided to instead make Tyreek Hill their primary option. Once that decision was made, it didn’t make sense to keep Maclin around at $10 million. He signed a two-year deal worth $11 million with the Ravens. That’s more in line with what he’s worth. Maclin is a starter-quality player, but he’s not super speedy or athletic. He won’t blow by defenses for long touchdowns, and he doesn’t create size mismatches around the goal line.

WR Mike Wallace: I think he looks pretty similar to Maclin. They signed him to a two-year deal worth $11.5 million a year ago, which is almost exactly what Maclin just received. He caught 72 passes for 1,017 yards and 4 TDs last year. He was underused at times; only one touchdown in his final 14 games, for example. Part of this can be attributed to him being overshadowed by Steve Smith. Smith missed most of three games with an ankle injury, and Wallace caught 21 passes for 280 yards in that three-game stretch – his most productive games of the season. He’s not the burner he used to be; just 10 receptions over 20 yards last year (37 wide receivers had more). He’ll be 31 on opening day (two years older than Maclin). In my opinion, both of these veteran wide receivers are candidates to finish with 800-1,000 yards and 5-6 TDs. (Per-game, I think they’ll average 50-60 yards.)

WR Breshad Perriman: He’s a former first-rounder, and they’d like to get him going. He’s big, fast and athletic. He had a handful of impressive downfield catches last year. But I don’t know if he’s got enough know-how yet. I don’t think he’s a great route runner or catcher of the ball. He was plagued by drops at Central Florida, and he dropped 5 of 38 catches balls last year (a lesser rate). He caught only 33 of the 66 passes thrown his way last year. Maybe he moves past Maclin and Wallace, but I expect the Ravens will probably use him in a limited role. If he were primarily their No. 3 receiver, they could use him on a limited role, having him run primarily vertical routes down the sidelines. If I were walking into a draft today, I would select him after both Maclin and Wallace. Probably about 600-700 yards and 3-4 TDs, I think.

WR Eric Decker: Despite signing Maclin, the Ravens indicate they’re still interested in signing Decker. We’ll see. I expect Decker will land elsewhere, with Buffalo currently the team with the largest receiving need. Anquan Boldin is also looking for work, but I don’t know if anybody will be interested in taking him on.