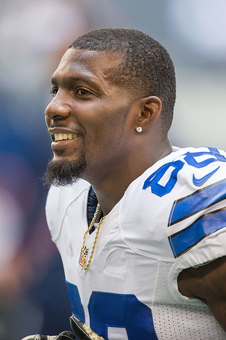 I see that Jason Witten is saying he believes Dez Bryant will sign with the Packers. That would be intriguing, with Aaron Rodgers perhaps being able to better utilize Bryant in the red zone. Too often Bryant and Dak Prescott weren’t on the same page in that part of the field.

If Bryant ends up signing with Green Bay, that would reduce the value of Davante Adams and Randall Cobb – it would make for a crowded receiving group in the red zone. They also have Jimmy Graham, who was really busy around the goal line for Seattle last year.

But if the Packers were sure they wanted Bryant, I would have guessed they would have signed him by now. They might want to first take a look at the three receivers they selected with late-round picks, gauging when any of them might be ready to put on the field. They also have Geronimo Allison, and Jimmy Graham actually plays more like a wide receiver than a tight end.

Other free agents who are still out there …

DeMarco Murray: He’s 30, but he can still play. I would expect he’ll be a backup somewhere. If some team has an injury and wants to sign somebody who can start, I would think Murray would be the first guy they would call.

Adrian Peterson: He’s 33, but he says he’s healthy and wants to play. Some team at some point might sign him as a short-term stopgap. The Saints might have some interest in him as a fill-in while Mark Ingram is out, but they want to first look at the young backs on their roster.

Alfred Morris: He doesn’t have much speed but can bang between the tackles. At some point this year, I expect he’ll be a backup tailback somewhere.

Paul Perkins: He flopped in New York last year, but I remember him running for 100 yards in his only start for them the previous seasons, as well as a long catch-and-run in a Monday night game at Minnesota. He’s got a pectoral injury that needs to heal, but once he’s healthy, I would imagine some team will sign him to compete for a backup job.

Orleans Darkwa: Runs with some power but doesn’t have much speed or pass-catching ability. Could land as a backup somewhere.

Shane Vereen: Might still be an above-average third-down back.

Eddie Lacy: I don’t think he’ll ever play in an NFL game again.

Jeremy Maclin: I haven’t heard much about him. He’s entered the last two seasons as a No. 1 receiver. I would expect he’ll land as a No. 3 somewhere.

Michael Floyd: He was somewhat productive in 2015, with 52 catches for 849 yards and 6 touchdowns but hasn’t done much the last two years. The Cardinals released him in December, 2016, after a drunk-driving arrest, and Floyd didn’t make much of an impact in Minnesota last year. He’s 28, and some team probably will bring him to camp for a look as a possible No. 3 receiver – not certain to be on an opening day roster.

Brandon Marshall: He’s 34 and he can’t run anymore. Some team possibly will bring him in for a look, but more likely not.

Eric Decker: He’s 31, sniffing around looking for work. Probably some team will bring him to camp, but I don’t know that he’ll be on an opening day roster. I don’t envision him starting another NFL game.

Coby Fleener: He has some speed and pass-catching ability but can’t block at all. He’s had five concussions, which probably will scare most teams away.

Marcedes Lewis: If a team is looking for a tight end who can also help as a blocker, Lewis is probably the first guy they’ll call. Seems like he’s been around forever, but he’s 33.

Antonio Gates: He wants to keep playing, but I don’t think any team wants him. He’ll be 38 next month.

Julius Thomas: He’ll be 30 next month and the last few seasons have been underwhelming. If any team is willing to bring him to camp, it likely will be on a one-year contract worth close to the minimum (perhaps with some incentives).

Colin Kaepernick: After a year away from the game, I’m not sure if he’s still an above-average backup quarterback. He might be, but I’m not sure. He comes with a certain amount of drama and maybe additional headaches (some fans canceling tickets, Kaepernick saying or doing things the team doesn’t like) and that could be scaring off a lot of teams.

Jay Cuter: He’s 35, and I think we’ve seen the last of him. His wife in April said he’s received offers but is likely retired.