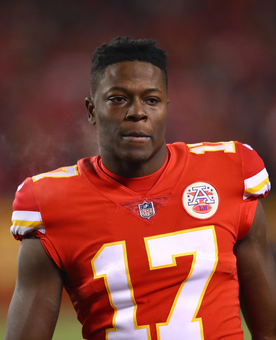 When a free agent signs and no financial details are revealed that day, that’s not a good sign. That usually means that it’s a lesser deal, with the agent and player quietly hoping that nobody notices that they had to settle for a modest contract.

When a player lands a lucrative deal, on the other hand, there’s interest in getting that information out. Devin Funchess, for example, somehow managed to get the Colts to agree to pay him $10 million for one year (with another $3 million supposedly available in incentives). That info was fast-tracked to the media.

Donte Moncrief and Chris Conley, like Funchess, signed as free agent receivers, but the dollars weren’t announced. But some days later, the info has trickled out, and both well short financially.

These are speculative deals. They indicate that both players will be brought into camp to compete, but neither is guaranteed a starting job. They both would be earning a lot more if there were teams that were confident they could be viable starters.

Had those players signed contracts worth $8 million per year, it would give me more confidence they would be one of the top 2 wide receivers on their own teams. A big contract would be evidence the Steelers felt Moncrief might be better than James Washington. And had Conley landed a big deal, it would look more plausible that he might outperform Dede Westbrook.

Moncrief comes off a pair of down seasons. He drew a lot more interest least year, when the Jaguars signed him to a one-year deal worth $9.6 million – more of a Funchess-type deal.

Conley caught 32 passes for 334 yards and 5 TDs last year. That’s pretty nominal production, considering Patrick Mahomes threw 53 touchdowns last year. Conley didn’t catch any passes in the playoffs. Sammy Watkins missed about half of the season, and even when he was out Conley didn’t do much (at the end of the season, Mahomes seemed to have more confidence in Demarcus Robinson).

Kansas City had plenty of other weapons, of course, but Conley was on the field for over 60 percent of their offensive players in all but three games. Given the kind of numbers that offense put up, remarkable that Conway could average under 19 yards per game.