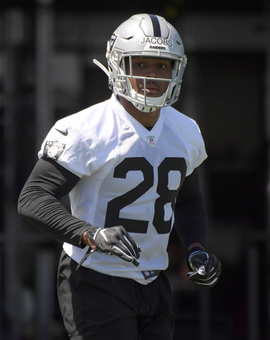 Where the top runners, receivers went in dynasty

So my main dynasty league held its annual rookie draft over the weekend. It's basically the best part of the year, the time when those of us who didn't already trade away all of our picks get to unwrap a bunch of new presents and add them in with the rest of our toys. As always, I'll recap it here.

Today I'm only recapping the first round; tomorrow I'll do the last two. My picks are in bold (thanks to trades, I had three first-round picks; I do love my rookies). Traded away in those deals were Ronald Jones (I gave up on him about three months after drafting him last year, based on reports that the guy couldn't catch a cold) and Mark Ingram (nice back, but he's going to a very crowded situation that got moreso in the last week, and I'd rather get out a year too soon than a year too late).

The top pick in most rookie drafts. We've discussed him here plenty, with the dialogue including the idea that he seems a little overrated. None of his measurables are great (including a 4.6 at his pro day), and he averaged half a yard per carry less at Alabama than backfield mate Damien Harris. On his behalf, though, he was the consensus best all-around running back in the draft, selected a wide margin before anyone else, he has a three-down skill set (big enough to run inside, good enough receiver to play in passing situations), running back is the hardest position to fill, and he goes to a team that doesn't have better backs in any area than him. Even if he's closer to being the next Doug Martin than the next Saquon Barkley, he should be a good starter for the next several years.

I considered Harry and the next two players drafted with this pick, and indeed settled on each of them over the course of the week. Settled on Harry in large part because neither back jumped out at me on film; I think all three have bust potential. But if Harry hits, he could be New England's No. 1 wideout for a decade, and that's not going to happen with a running back. I don't expect Harry to do much as a rookie, but this is dynasty.

Selecting Sanders with a second-round pick makes it clear how highly Philadelphia views him. I wanted to like him but I just don't see a special talent in any one area. He can run inside and he can catch, but he's such a far cry from the guy he followed at Penn State, Saquon Barkley, that I suspect he'll leave the Eagles wanting a little more. Early on, he'll probably be stuck behind one of the Eagles' current marginal backs in one area or another. Three-down potential one day, but doesn't look like a superstar.

Opportunity-wise, I like Montgomery more than Sanders. He only has Mike Davis standing in his way for lead dog duties. Not much speed, but I think a Kareem Hunt comp is apt, and he has the receiving ability to play in passing situations (though obviously, Tarik Cohen is around for most of those snaps). But he also looks like a fairly ordinary talent.

My friend agonized over this pick for a while before setting on Campbell. I would have too. Talented guy, ran a position-best 4.31 at the combine, and goes to a young and exciting Colts team that has nothing after T.Y. Hilton at wideout (I don't count Funchess or Chester Rogers, we know what those guys are).

Tight ends get 1.5 points per reception in this league, and with flex spots you can start up to three of them. Worth mentioning. Working on the tight end dynasty rankings right now and Hockenson and Noah Fant are similar. I suspect Fant will have the better rookie season, although Hockenson has more of an all-around skill set. Had Detroit not squandered the last tight end drafted in the top 10, I might feel better about Hockenson. As Ian has pointed out, nothing in his measurables screams top 10 selection; doesn't have great speed or big hands or any of that stuff. But the safest bet to be a long-term starter.

Pick was made before Pete Carroll raved about him at rookie minicamp. But who cares, Pete Carroll never met a player he didn't rave about. If Pom-Pom Pete doesn't think you're the greatest thing since sliced bread you may as well go get that college assistant coaching job right now. Personally I'm concerned about how his straight-line speed is going to translate to the NFL. Talented athlete but I'm concerned he might be a situational wideout, not a go-to guy.

There's only one Tyreek Hill. Hardman may have been drafted to replace him, but easier said than done. He wasn't a productive or polished wide receiver in college, and there's more to being Hill than running some deep routes or jet sweeps. The fact that Hill is still on Kansas City's roster indicates it's not a given he's getting axed in the near future.

Prior to the draft Brown might have been my pick at 1.05. I don't know why we're supposed to think his college teammate D.K. Metcalf is better beyond size/speed combo. Only negative is Tennessee inspires no confidence it has the coaching staff or quarterback in place to get the most out of him over the next few years, and they've got Corey Davis and Adam Humphries drawing targets as well.

Controversy with this pick, since the owner who ultimately took him had set up autodraft and took a different player here. I, sitting at 1.11, had actually tried to trade up to 1.09 to take Fant, and was thrilled to be able to get him. But the autopick was a mistake, he actually did want Fant, and that's who he ultimately got. Fant is a catch-only tight end (yes Denver says they think he can play inline, teams always say that) who ran a 4.5 at the combine and is working with a quarterback whose top 3 reads for years have been tight ends.

You've got to trust your personal scouting, right? I didn't see any college back in all my highlight and game re-watching that I liked more than Henderson. The Rams traded up to select him even though they have Todd Gurley, who apparently has an arthritic knee, and matched a restricted free agency offer for Malcolm Brown (another worrying sign regarding Gurley, and when they matched on Brown they didn't know they'd be drafting Henderson). This pick is a bet on player talent rising to the surface and Sean McVay and the Rams offense. And a bet against Gurley.

Not only is Murray the only quarterback from this class I'm betting heavily on, he's the only one likely to be a fantasy difference maker. Yeah, he's small. But his immediate predecessor, Baker Mayfield, was an immediate NFL performer, which is a good sign. His college production (as both a passer and runner) is promising, he'll start right away, and he could salvage great fantasy value even in weeks he struggles throwing it.

Let me know where you think we all screwed up, and I'll be back to recap the second and third rounds of this thing tomorrow.