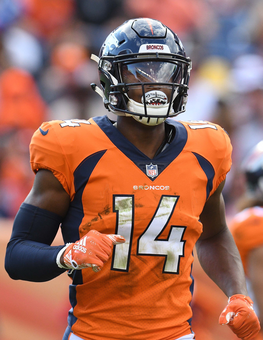 Ian Allan answers your fantasy questions. In this edition. Is Fantasy Football Index missing the boat on Courtland Sutton? How to incorporate ADP data into an auction. How much should be paid for a top player in an auction? How to adjust rankings when 6 points are given for touchdown passes.

Looking at your rankings Courtland Sutton sticks out to me. He is not even ranked on the PPR sheet. 700 yards as a rookie should at least put him in the top 50 of he repeats them stats. I personally view him as the number one in Denver with Sanders coming back from the Achilles injury. Much upside given his current ADP. What gives?

That could happen. I’m not opposed to be people picking Courtland Sutton. But after carefully looking at the team and putting together the writeup, I don’t think I’ll be selecting Sutton in any leagues. I’m pretty sure there will be multiple owners in every league who will be higher on him. Emmanuel Sanders is still there, and if he’s healthy, he’ll be better. And even if Sanders never plays another NFL down, I’m not confident Sutton will be their top receiver. DaeSean Hamilton and Tim Patrick were both more productive in the final month of last season. Hamilton in his final four games caught 25 passes for 182 yards and 2 TDs. Patrick caught 19 passes for 242 yards. (Repeating: those are four-game totals – a quarter of a season.) Sutton last year operated primarily as a deep threat, running vertical routes. In a PPR league, I would be more interested in selecting a player who caught more passes. Hamilton should be their slot receiver. New coach and a new offense, of course, so perhaps Sutton plays a different, better role, but I’m not confident he’ll be the best of their young receivers. Joe Flacco should start most of their games, and in recent years he’s been a quarterback who tends to look for the short throws underneath – could fit better with Hamilton than Sutton.

To what level do you take into account ADP when that information is available during a draft? I've been reading since the early 90s, so I know that sometimes you recommend some guys that aren't on anybody else's radar. I also play other (card) games with a drafting component. I know that the only thing better than getting your top-rated asset now is to get the consensus top-rated asset (that you have rated 2nd) now, and your actual top asset on your next turn. My current method for picking guys where there's a large discrepancy between my (your) rankings and consensus (e.g. Peyton Barber) is to just keep holding off until I reach the point where I would feel bad if I missed out next time (as compared to being mildly annoyed.) Do you have your own method for extracting value, or do you just pick straight off your rankings?

There’s a place for ADP. It’s a better tool, I think, than strength of schedule (not to imply that you can have one and not the other). With strength of schedule, you might try to identify a few notable players who have easier or harder schedules, or which ones might have a good chance of coming up big in a pivotal week. Maybe that makes your team just a little better. But by comparing ADP to your draft board, you get a feel for a few players at each position that almost certainly will be on your team, and some others that likely or could be on your team. Then you’ve got to figure out when to select them. That depends largely on whom you’re drafting against. Are there some owners in the league who see the players as you do? Or when the 10th running back on your board is only 25th on ADP, are you reasonably confident he won’t be one of the first 20 chosen? It could be useful to look at the other player choices. In the middle of the second round, for example, you might be poised to select the 7th-best wide receiver on your board, but you think there’s a pretty good chance you can get him in the next round. If said player isn’t much better than next wide receiver, makes sense to take a slight downgrade in that round, hoping to dramatically exceed expectations in the third.

In terms of auction strategy, how would think about spending your $100 budget in terms your top 3 players? In our league, the top RBs can go for $50. So if you want a top 5 RB, it will cost 45-50 percent of your total budget. All of the teams in the top 4 last year “overpaid” for RBs and it didn’t matter – they still did well. I never see auction values from industry analysts that align with how our league values, which is 40-50 percent of budget prices for top RBs, and we’ve been at it for 27 years with the same group.

If you spend close to half of your money on one player, he’s got to hit. And even if he comes through, you’re going to be losing at most of the other positions. I don’t have the exact specs for your league, but I would guess I’d be reluctant to spend more than about a third of my payroll on one player. I’d rather spread around that money, picking up a variety of value deals. In my longest-standing league, we’ve been auctioning for close to 30 years. Back in the early days, the top players would go for close to $50 (out of $100). But that’s steadily declined over the years. Nowadays, owners are very reluctant to pay $30 for a player. We do an auction in the magazine. In that league, owners are reluctant to commit more than 25 percent of their payroll to a player. I think that’s low, so I’ve purchased my No. 1 overall player two years in a row in that league. I bought Todd Gurley for $50 (out of $200) last year, and I got Saquon Barkley for $45 in May.

Our league finally switched to a PPR league this season and all TDs count 6 points. How do you adjust your draft when going from standard to PPR?

It increases the value of quarterbacks. In a regular PPR league, I’ve got Patrick Mahomes as the 26th player overall, with the other three top-tier quarterbacks showing up just outside the top 40. If we’re going to 6 points for touchdown passes, it enhances the payoff of landing a player who’ll throw about 40 touchdowns. I played around with the numbers some, and I’m seeing Mahomes moving up to 19th, Andrew Luck at 27th, and Matt Ryan at 31st (with Deshaun Watson, who’s more run-based, still around 40th). As we work our way through August and you want to look at the revised rankings each week, use the “custom rankings” feature on the website. It’s available by clicking on the “your stuff” link at the top of the page.

In a PPR league, I can keep 3 players. I’m keeping Kamara with my 12th-round pick and Conner with my 14th-round pick. I’m torn on my 3rd keeper. Would you keep Mahomes with an 8th-round pick or Aaron Jones with a 9th-round pick?

I would go with Mahomes. I understand that Jones has some breakout potential, and that running backs are more coveted. I also don’t expect Mahomes to be as good as last year. But he’s the top quarterback on my board (with an excellent chance of being one of the top few) and I’d be happy to lock him down at the price of an 8th-round pick.

Just wanted to give you a long overdue THANK YOU. Last season, I limped into the playoffs with numerous contributors gone via injury -- Cam Newton, Todd Gurley, Aaron Jones, Jordy Nelson, Tyler Boyd -- and almost no realistic chance to win on paper. I subscribed to your weekly updates and used your rankings to supplement my lineup with the likes of Nick Foles, C.J. Anderson, Robby Anderson, and others. And my co-owners watched in fury as I ran the table and won the title, which I couldn't have done otherwise. My league of 12 has been playing together for 20 years. In that time, I've won a quarter of our titles, using your rankings exclusively. I can't imagine any other publication being able to deliver at that rate, or even coming close. This magazine has been my trusty upupdowndownleftrightleftrightBAstart for two decades now. So once again... thanks.

Thanks for the kind words, Jacob. And thank you for being one of my favorite letter writers over the years. You almost always mix in some witty banter. Always good to hear from Bam Morris’ boyhood home.