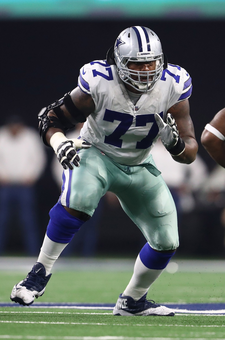 Time was the only players who made more money than left tackles were quarterbacks. Things have gradually changed, but it's still a highly compensated position -- nearly half (15) of the league's starters make over $10 million per year. One of those guys, Trent Williams, has a very uncertain future.

Williams is one of the league's best left tackles, but he wants out of Washington. Money is only part of it; he's apparently angered that the team misdiagnosed a medical issue, which resulted in him having a tumor removed from his head. Conflicting recent reports on whether Washington is looking to trade Williams, or just heavily fine him until he returns (which seems unlikely). Replacing Williams wouldn't be easy; Washington brought in 36-year-old Donald Penn, and also has former Giants bust Ereck Flowers.

The difficulty in ranking left tackles is that since it's such an important position, most of these guys are really good. Rare is the team that says, eh, we can get by at that spot with a lesser or low-budget player. Teams use high picks on them, they pay them big money, and they seldom let them get away.

The rankings, then, are relative -- just because a guy is ranked 17th or 20th doesn't mean he's poor...just that there are some guys we're deeming a little better. Maybe they're a little younger, or more decorated at awards time, or (most often) aren't as much of an injury risk. Have to downgrade guys you think are more likely than other players to be affected by injury.

That last one is a big one: Russell Okung, for example, gets docked because he is working his way back from a medical issue, which could limit his effectiveness. Donovan Smith is dealing with a "minor" Achilles injury, so his grade gets dropped.

Williams gets docked because we don't know what team he'll be on, or if he'll be playing at all (should Washington not like the trade offers it gets). Taylor Lewan, four-game suspension to start the season (so Tennessee will have a lesser player at tackle 25 percent of the time this year.

Rankings are below, feel free to (politely, please) let me know where you think I've been too kind, or unfair, to your team's starter.

Overall OL rankings are posted on our Facebook page at this link. In those rankings, the biggest development since last week is probably the Jets bringing Ryan Kalil out of retirement to play center. Kalil may not be the player he once was, but he's likely better than what New York was going to put on the field.