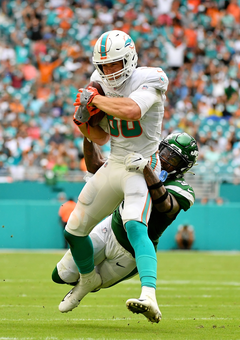 What nobody will be somebody in Week 10?

ASK THE EXPERTS appears weekly from training camp through the Super Bowl with answers to a new question being posted Thursday morning. How the guest experts responded when we asked them: With six teams on bye, what nobody -- available on waivers in many leagues -- will be somebody in Week 10?

This is a week where you can probably find a wide receiver on the waiver wire that can plug in and assist. The most obvious candidate is likely Rams’ Josh Reynolds who will be thrust into a starting role with Brandin Cooks out. Likewise, Atlanta’s Russell Gage will now have a more prominent role and like with the with Rams, the Falcons run a lot of three-receiver sets. I also am willing to add in a bid on Arizona’s Andy Isabella who showed his big-play ability and second-round pedigree last week. If you are in a pinch you could take a flyer in what should be a shoot-out matchup with the Buccaneers this week.

Working off of the assumption that Patrick Mahomes will be back, I'm interested in pretty much any receiver on either team in the KC-TEN game. Demarcus Robinson has bounced back off of rosters in some of your leagues after a nearly invisible October; Mahomes hit him twice in the first 16 minutes of the game in Denver before leaving with his injury, and there's every reason to believe a rising tide would lift D-Rob along with everyone else. On the other side, Ryan Tannehill has been playing well (enough) (ish), and teams that face Mahomes are often under tremendous pressure to score points, especially in the second half, especially by passing. So any of the Titans guys -- down to Adam Humphries for sure -- could see an uptick on Sunday.

Chester Rogers should get more balls thrown his way as T.Y. Hilton and Parris Campbell are out. This combined with the Colts opponent, the Dolphins, could provide him with opportunities. Of course Zach Pascal is in the same position so they may be fighting for touches. Another long shot is Bilal Powell. Sure LeVeon Bell is fine after his MRI....hmmmmm I have my doubts as they added a RB this week from their practice squad (Josh Adams), Ty Montgomery is banged-up, and I have yet to see Bell practice after proclamations that his knee is not a major problem. So I will believe Bell is fine when I see him declared active on Sunday morning. Until then Powell is a sneaky hedge this week.

I think Mike Gesicki might be coming on. He caught all 6 passes thrown his way last week, for 95 yards, and he went for 41 and 51 yards in two of his three previous games. He’s a pass-catching tight end, and I think the Dolphins might be starting to use him more — especially with Preston Williams now sidelined for the season. Gesicki is officially a tight end, but he’s more like a wide receiver — he’s tall and lean, and when he’s on the field, it’s to catch passes rather than block. Ryan Fitzpatrick is starting for them, and I like his playing style; he’s a quarterback who’s willing to put the ball up, giving his pass catchers chances to make plays.

There are players out there available that can help us. With Brandin Cooks expected to be out multiple weeks with a concussion, Josh Reynolds becomes a viable option. After hardly playing all season, he had a 3-73-1 stat line and was targeted eight times in Week 8, with Cooks not in the lineup. If you need a longshot, Atlanta wideout Russell Gage, while replacing Mohamed Sanu, had a 7-58-0 game with 9 targets with Matt Schaub at quarterback in the last game.

Mason Rudolph and Kyle Allen would be my quarterback choices. For wide receivers, Ted Ginn could put up a couple of long-distance TDs against the disappointing Falcons.

I’d consider Mike Gesicki of the Dolphins for sure. He comes off a 6-catch, 95-yard effort against the Jets and three of his last four games were over 40 yards. He’s in a nice spot for better stats the rest of the way since the Dolphins just lost Preston Williams and need viable receivers. The Dolphins are never going to have the luxury (or ability) to run the ball much and Fitzpatrick is a capable quarterback in need of good hands near him. Gesicki is a rare tight end that should be better in the second half of the season.

Unless Chris Herndon has the practice of the year on Friday, I'll be using Ryan Griffin in a few leagues. Griffin very quietly has three touchdowns (and a two-point catch) in the last four games, and for any secondary tight end, we're just looking for a lucky play around the goal line -- that's the Darren Fells principle. Griffin also has 10 catches in the last two weeks. I wish Herndon were around to be New York's featured tight end, but in Week 10, with so many teams on bye, beggars can't be choosers.

Pianowski has been playing fantasy football for over 20 years and writing about it for 18. He joined Yahoo! Sports in 2008 and has been blogging 24/7 on RotoArcade.com ever since.

Looks like Evan Engram is going to miss time, so I could see Rhett Ellison having a nice game against a Jets defense that's pretty much struggled all along. I also picked up Chester Rogers, who's scored 2 TDs this season -- both in games T.Y. Hilton missed, as he will this week.