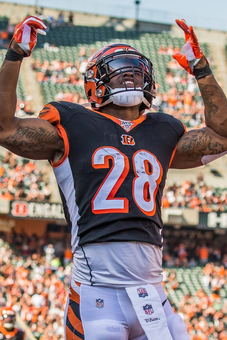 Who is this season's biggest trick...or treat?

ASK THE EXPERTS appears weekly from training camp through the Super Bowl with answers to a new question being posted Thursday morning. How the guest experts responded when we asked them: Happy Halloween edition! Who is this year's biggest trick...or treat?

I’d have to go with Marvin Jones as my trick. He seems stuck at 50 yards per game and then blows up for 6-101-1 against the Eagles. He’s back! Not so much. Especially the 17 yards in Week 6. So plenty safe to sit him against the Vikings secondary but no, FOUR touchdowns. He’s back! Against the Giants terrible secondary the next week? Four catches for 22 yards. Ouch.

Patrick Mahomes remains my forever treat — no one else is as fun to watch, and the constant barrage of 300-and-3 games (occasionally 400-and-4) is nice too. Get well soon, Pat. As for tricks, go with Tevin Coleman. Suffered that ankle thing early in the year, whereupon he was cut in my big league, and I added him immediately. Then I had a roster crunch and had to cut him myself, and he promptly landed on his third team of the year ... where he remained glued to the bench behind Mark Ingram and others, and I’m guessing you can guess what comes next. I was playing the team that used him to cover for Ingram’s bye this past week. I lost by one of the four touchdowns Coleman scored in the biggest NFL game of his life — in no small part because Alvin Kamara is down for me (as is Mahomes, etc., etc.) and I no longer had a Tevin Coleman on hand to cover his absence. TL;DR version: I hate Tevin Coleman. I hate Halloween. I’m not crazy about fantasy football itself right now. And, please, for real, get well soon, Pat.

Joe Mixon is my trick this year. He always plays yet he is Dr. Jekyll/Mr. Hyde in fantasy points. Last week he scored 17 in London. The week prior he had 4 combined yards! Argggggg! Treat has to be DJ Chark, with 17.88 fantasy points per game. He is the 6th-best wide receiver at the moment in PPR leagues. Another treat is Darren Waller. In 6 games so far he has averaged 19 fantasy points. He is the 2nd-best tight end.

The biggest trick has to be Packers wide receiver Marquez Valdes-Scantling. I got so tired of him failing to produce when I start him that I cut him in one FFPC main event team. Another team spent nearly $400 to acquire and start him this past week and he got one catch for 4 yards as his reward! LOL.

I think Kenyan Drake and Jaylen Samuels will be full-sized Snickers bars in Week 9. With both teams, I don’t think the other two viable running backs are going to play — David Johnson and Chase Edmonds for Arizona, and James Conner and Benny Snell for the Steelers. Drake and Samuels should be used in full-time type roles, and I think that makes them strong candidates for top 10 numbers. With both backs, they’re not only runners but pass catchers. I would be very comfortable going into Week 9 with Drake and Samuels as my starting running backs.

I debated on the treat side between all-world Dalvin Cook and late-round sleeper-turned-gold Darren Waller. Let’s go with Dalvin Cook. A favorite of mine since he came into the league, it’s great to be capitalizing on Cook’s huge year this season. He’s been money every single week -- Cook has scored a touchdown in every game except one, and in that game, he piled up 218 yards. On the trick side, I really thought David Montgomery would be more useful this season. After getting burned (again) with Montgomery’s 19-yard clunker in Week 7, I sat him last week only to see Montgomery easily have the best game in his young NFL career with 147 yards, four receptions and a score. Maybe Montgomery’s Week 8 showing will be a sign of things to come.

When we draft players we love them. They are the greatest players in the world. To snag a premier wide receiver like Odell Beckham in the past has been spectacular and makes us want to brag. This year he is looking up the scoring list and seeing 27 other names ahead of his. Picking up DJ Chark on waivers gives you a virtual unknown at draft time who is now over 50 points ahead of Beckham. Drafting Beckham this season has yielded you a cruel trick, as opposed to a treat. Happy Halloween!

I have Cooper Kupp everywhere. I'm risk-averse with guys coming off injury, but preseason reports were good, and he was the 3rd Ram wideout off the board in most of my leagues, so I took him. He's been great to have in my lineup. Another treat is Darren Waller, who I actually nominated by accident in an auction, got him for a buck as my 2nd tight end, and have started him every week. Biggest trick is either Joe Mixon or maybe Devonta Freeman. I'm guaranteed to start or bench those guys at the wrong time, week after week.