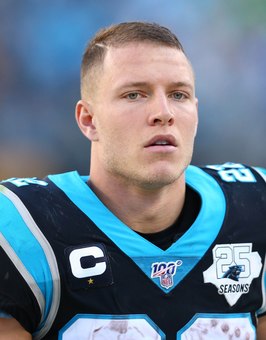 Ian Allan answers your fantasy football questions. In this edition: Will Carolina park Christian McCaffrey? Does it pay off to draft a quarterback early? Week 16 lineup questions. And more (not much more, but more).

With teams like Panthers and Dolphins eliminated how do you play studs like McCaffrey and Parker in week 16 championship game?

I was surprised last year when Carolina – 6-9 at the time – used McCaffrey only briefly early in their Week 17 game at New Orleans. He needed only 35 yards to reach the 2,000-yard mark, and I figured that was something that would interest him. A year later, they’re back in the same spot. They’re out of it, leaving them to ponder how much punishment they should risk exposing him to. It wouldn’t surprise me if they start using their other running backs more. But with two weeks left, it’s too early to start getting to worried about that kind of stuff. I would have no problem starting McCaffrey or DeVante Parker in Week 16.

At the beginning of the year, the consensus among the experts was to not use an early pick on the QB and wait until the later rounds. Based on your rankings from the beginning of the season, how would that have worked out? i.e. how did your top 5 QBs do compared to waiting for QB6 through QB12?

For my quarterback list, it wasn’t a great year to use an early pick on a quarterback. I had Mahomes, Watson, Ryan, Rodgers and Mayfield in my top 5. Of that group, only Watson kind of put up the kind of numbers you were hoping for. He was the only one to hold his value. Mahomes is good, but his production hasn’t been on par with what people were hoping for when they selected him. Ryan has fallen a little short, and Rodgers and Mayfield have been well off. I see three quarterbacks who weren’t in my top 15 who had really good year. I had fears that Lamar Jackson (18th) and Josh Allen (22nd) couldn’t pass well enough and would have problems staying healthy. They both blew away where I had them ranked. And I had concerns about Jameis Winston (21st) throwing too many picks and getting benched. Winston has thrown lots of interceptions, but he’s still starting, and his numbers have been pretty awesome. With the kind of numbers teams are putting up nowadays, there’s always going to be the potential for people to hit on a big-time quarterback after a dozen have been selected. But you’ve got to hit on that quarterback. If you had let 15 quarterbacks get selected, then chosen three, you might have ended up with Jimmy Garoppolo, Mitchell Trubisky and Derek Carr.

It’s an all-purpose hodge podge. If you focus only on Week 16, you alienate the Week 16-17 guys. If you focus on both weeks, those ending in Week 16 aren’t satisfied. It’s also notoriously difficult trying to put together rankings before the games have been carefully looked at. When you see the rankings in the Weekly proper, those are formulated after spending about an hour on each of the 32 offenses, looking at the recent weeks and the various stat trends. Formulated the player list before doing the research is putting the cart before the horse. On my end, I’m looking to scoot the Tuesday product out the door, giving the readers a slight appetizer while I look at the matchups more carefully.

What do you think of sticking with Higbee for week 16 versus staunch San Francisco Defense. Alternative is Austin Hooper but aside from targets doesn’t seem to be producing since coming back from injury?

I would roll with Hooper. He’s had a couple of games now to knock off the rust. He nearly scored last week at San Francisco (I suppose that could also be used as supporting evidence for Higbee). Hooper has the far more favorable matchup.

With the wide receivers, I’ve got Lockett and Parker in my top 7. Brown has been great recently, but I’ve got him down at 12th. I hate to leave Brown out of there, but I would be rolling with the two veterans. With the running backs, if it’s standard scoring, I’m going with Conner. If it’s PPR, I would play for the receptions and go with White.

What QB would you start this championship week 16? Dak, Matty Ice, or Tannehill? Thanks. I'll hang up and listen.

I’ve got them all in my top 10 this week. With Dak Prescott working through a shoulder injury and having not been as good on the road, I think Matt Ryan is your guy right now.

Help me decide. Final game, huge pot, standard scoring. I have Cook. I feel , he will not play or if he does in a reduced role, 10 to 15 touches. Also , 1 hit from leaving the game with 5 pts lets say and hurt rest of the season. I have both Mattison and boone. I am playing against McCaffrey, henry and moesart, so I need points. I cant see playing boone unless he is full time, not a reduced role. I also have Sanders, Eckler, and Hyde. Maybe start sanders and eckler and hope and forget the drama. Need your thoughts

There are a lot of injury issues there, so things will be clearer at the end of the week, but I don’t think Cook or Mattison are playing. With both guys, you should have a better sense of their situations on Saturday (when the Vikings submit their injury report for their Monday night game). If we’re submitting lineups today, I would go with Miles Sanders and Austin Ekeler. Ekeler isn’t used much as a runner, but even since Melvin Gordon has come back has averaged almost 60 receiving yards per game. Ekeler has caught 8 of his team’s 22 TD passes.

Josh Allen has run for 8, 9 and 8 touchdowns in the last three years. Lamar Jackson has run for 7 TDs in each of the last two seasons. In the Super Bowl era, who’s the only other quarterback who’s run for at least 7 TDs in back-to-back seasons?