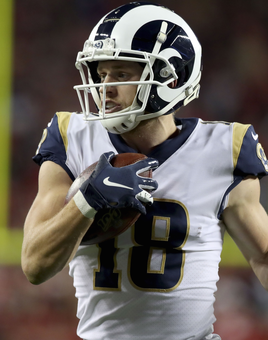 Ian Allan answers your fantasy football questions. Special year-end edition. What's up with Kupp? Which teams will rest their players in Week 17? And pulling off an undefeated season.

I've had Cooper Kupp on my team each of the past 3 years, and he has always outperformed where I selected him. Looking ahead to next year though, I am REALLY concerned about how his usage changed so drastically after their bye. His snap count dropped, his targets fell through the floor starting week 10, and there were times were he wasn't even on the field for large chunks of time.... What is your take on the Rams drastic and apparently inexplicable change in (an apparently healthy) Kupp's usage the last 5 or 6 games, and do you anticipate that carrying through to next year?

They’ve been using Josh Reynolds more than they did in the past. Reynolds in the Seattle game (in Week 14) played more than both Kupp and Brandin Cooks. I’m not sure why that happened. Kupp underwent an ACL surgery last year and Cooks has had multiple concussions, but I don’t think it was injury related. I haven’t seen either of those players on the injury report. And if they were worried about Cooks suffering a third concussion, you would figure they would have reduced his playing time earlier in the year. Maybe they just like how Reynolds has played, and they view him now as more of a guy who needs to rotate in, rather than an insurance policy who’s mainly on the sideline unless one of their big three gets hurt. This could also be a formation issue. For most of Sean McVay’s tenure, they’ve tended to leave their three receivers on the field for almost every play, but it’s different now. For the Seattle game, they used more sets with two tight ends, looking to establish a power running game. Maybe they feel that when they’re playing in a larger, power-type set, Reynolds is a better fit with that kind of offense. Perhaps he’s a better blocker than Cooks or Kupp, or perhaps they just want to save those guys some wear and tear when they’re running the ball. Whatever the reasons, here are the snap count percentages for their wide receivers (and I’ve got them identified by initials – Robert Woods, Brandin Cooks, Cooper Kupp and Josh Reynolds).

For 2020, I wouldn’t worry too much about Kupp disappearing or playing a diminished role. He’s clearly a skilled route runner, and he’s the guy they like to use in the red zone. He’s caught 9 TDs this year – more than twice as many as those other three wide receivers put together. Despite this recent downturn (and I would call it a slight decline, rather than him being phased out of the offense) he’s still caught touchdowns in each of his last four games.

The Ravens and Vikings are definitely resting players. Lamar Jackson and Mark Ingram aren’t playing for Baltimore, and I doubt you’ll see Hollywood Brown or Mark Andrews either. For Minnesota, definitely no Kirk Cousins or Dalvin Cook, and I don’t think you’ll see their other key guys, such as Adam Thielen, Stefon Diggs and Kyle Rudoph. Once a team starts pulling key guys, I think it’s best to just stay away from that offense entirely. There are two other teams I don’t trust. Bill O’Brien says it’s business as usual for the Texans, and that they’ll be playing all of their regulars and trying to win. But I expect things will change there if Kansas City wins it game (and it will) in the early time slot, locking Houston into the No. 4 slot in the AFC. I wouldn’t be comfortable using Deshaun Watson. I also wouldn’t want to use any Los Angeles Rams. Sean McVay has a well-documented track record of pulling players whenever he gets the chance. Neither Jared Goff nor Todd Gurley nor any of the team’s starting wide receivers has played in any of the team’s eight preseason games the last two years. And none of those guys played when the Rams entered Week 17 of the 2017 season with their playoff position secure. McVay doesn’t like exposing players to unnecessary risks, apparently. As a logical extension of that thinking, I don’t think that we’ll see any of those key Rams on the field this week. The game is meaningless to them. McVay hasn’t said anything about resting players – this is just my own effort to read the tea leaves – but I wouldn’t want to risk putting any of those Rams in a fantasy lineup this week.

I just went 16-0 in my fantasy football league, 10-team standard competitive league. Have you heard of this happening before? I averaged over 100 points a game. My worst week was the one where all 3 WRs were on bye in week 9 and still won. In case people are wondering, I took Julio Jones and Michael Thomas with the first two picks in the #9 slot. Freeman wound up coming through me in a lot of weeks, especially today as my 3rd rounder and Henry was my 4th round pick and saved my season in many weeks and also had Josh Jacobs as well. I had Cooper Kupp as my 3rd WR and though he tailed off at the end, he was amaaing the first half. And probably the steal of the draft was taking NE D and then took Prescott in the last round. FA didn't do much for me outside of using my last roster move on Tannehill.

Congrats. Well played. Savor it, because that’s really hard to do. I don’t know that I’ve heard of a 16-0 season. I was in a league one time where a team went undefeated but then got knocked off in the playoffs.