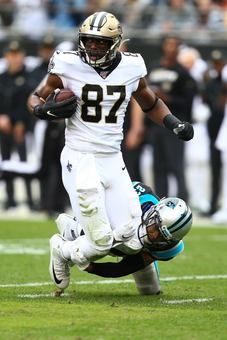 Who is your favorite playoff fantasy league sleeper?

They went to Jared

ASK THE EXPERTS appears weekly from training camp through the Super Bowl with answers to a new question being posted Thursday morning. How the guest experts responded when we asked them: Who is your favorite sleeper in playoff fantasy leagues?

I like the chance that Jared Cook ends up as one of the best tight ends. Each defense is going to devote everything to slowing down Michael Thomas and Cook came on strongly over the second half of the season with seven touchdowns over the final seven games. Playing on the road in the Divisional round isn't ideal, but Cook's best games came against the Saints toughest opponents. Thomas will not be enough by himself.

Raheem Mostert scored 9 touchdowns in the final six games of the season. He is a great sleeper pick, on a team that could go all the way and win the Super Bowl.

Well, the key to making this projection is determining a team likely to be in the Super Bowl. Since I like the 49ers as the NFC champion, I would select Deebo Samuel to step up and have a big postseason. Averaging over 16 points per game since Week 10, Samuel could be a major factor in winning fantasy wise in the "second season" He is a lesser name now, but on his way to becoming a future stud.

Lots of flashy names in this year's playoff receiver pool including Hopkins, Thomas, Adams, Hill, etc. While Julian Edelman may be a lesser name in comparison, he's been money throughout his career when the spotlight is on. When a clutch play is essential, Brady goes to the guy he trusts. With the Pats having to uncharacteristically play in a first-round game, he brings an extra week of added value as well.

Jared Cook. Why? Because the Saints have a bye this week (OK they do face the Vikings). It is the Saints' year for redemption after the no-call last year. Michael Thomas will see the double teams and Cook will be the workhorse as New Orleans makes a legit run at the Super Bowl and 4 playoff games played.

It seems to be a foregone conclusion that Seattle will beat Philadelphia, but recall that the Eagles won in Chicago last year and were awfully close to winning in New Orleans, too. So let's consider Dallas Goedert, who should be the best tight end playing this week and possibly wind up playing three games -- stranger things have happened. Another possibility is Josh Allen. I think Buffalo wins in Houston this week, and if Tennessee wins at New England, the Bills would then go to Kansas City (and Allen could be very good in that matchup, as well).