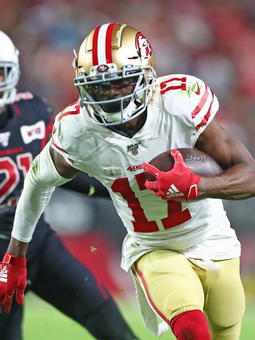 Is veteran worth a later round pick?

I’m a day late, but let me chime in on Emmanuel Sanders. I do have a couple of thoughts on him landing with the Saints.

I don’t love the signing. He’s 33. I’m not sure how much he has left. He made a few plays last year, I guess. His best game was in the Superdome with 7 catches for 157 yards, with a 75-yard touchdown (plus he threw a touchdown in that game). He’ll probably be their primary deep-ball guy, but Drew Brees doesn’t have much of an arm anymore.

To me, Sanders looks more like a contributor. The Saints have their primary weapons in place – Michael Thomas, Alvin Kamara, Jared Cook – and I would think he comes in behind those guys.

Sean Payton and Brees have been there a long time, putting up plenty of stats. In all those years, they’ve only ever had one season where they had two good wide receivers. Back in 2016, when they were running with both Brandin Cooks and Michael Thomas, with them both in the top 10 using PPR scoring.

On only three other occasions has New Orleans’ 2nd-best wide receiver finished with top-30 numbers. Robert Meachem ranked 26th back in 2009, and Lance Moore clocked in at 24th and 21st in the 2010 and 2012 seasons.

The No. 1 receiver in this offense almost always puts up great numbers, but that role is spoken for.

If Sanders is going to make an impact, it will be a matchup guy to possibly plug in when the Saints are playing at home in a situation where they’re likely to throw 3 TDs. Maybe you toss him in with hopes of getting a touchdown.

While the Saints really jammed the ball into Thomas’ hands last year, they did have some success drawing up plays for touchdowns to lesser guys. Taysom Hill, for example, caught 6 TDs.

TreQuan Smith will be part of this offense as an accent piece. He had a couple of huge games as a rookie. He missed about half of last year with a high-ankle sprain, but after he came back, he caught 4 TDs in his final six games.

If you take every player in the league who caught at least 5 TDs last year, only six of those players scored on over 15 percent of their catches. The Saints, oddly, had half of those six players.

Some chance that Sanders can be one of those kind of guys.

What four quarterbacks have started playoff games for three different teams? None of these guys is active. One is a former first-round pick. Another is a former ninth-round choice. Two were originally not drafted at all and didn’t play their college ball at major schools. Three have played in this century, while the other last started in the mid-90s.