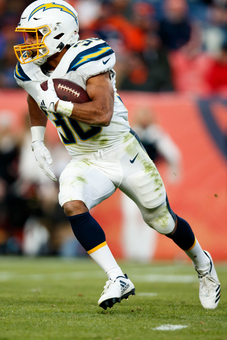 Whys and wherefores of Index picks in 14-team affair

On Friday I participated in a 14-team experts draft for the Fantasy Sports & Gaming Association (The FSGA). The draft was recorded and livestreamed on SiriusXM, which you can also find on YouTube. There were Experts Drafts every day last week, four traditional ones and a props bet one that Ian wrote about. Here's how mine went down.

The entire draft can be seen at this link. I can say that despite pouring a lot of time into prepping for this, things didn't go as I expected right from the get-go. I'll take you through my thought processes for each pick, and you can tell me where I screwed up.

This is a PPR league with 4-point TD passes, starting 2 RBs, 3 WRs, 1 player at the other spots, and a RB-WR-TE Flex.

1.11. Austin Ekeler
In my head, the plan was to select Kenyan Drake here. I'd seen enough other drafts, including all the earlier ones last week, where he was our top-ranked player at this spot, that I was optimistic he'd be here. Instead he went at 1.07, so I expected to be choosing between Ekeler and Josh Jacobs. But I got very excited when Derrick Henry got within one pick of me. Oh well.

Ekeler will be working with a new quarterback, that's a negative. But his backfield mate will be a much lesser player than Melvin Gordon, and he should catch a ton of short passes. (I'm not as confident that will happen with Jacobs, as discussed yesterday.) Ekeler was several spots higher on the Index board, so he was the pick. In retrospect, I wondered a little if I could have taken Jacobs here and Ekeler at 2.04. In a 12-team league, I might have gone that route, landing both. But I suspect someone would have liked Ekeler enough to take him.

2.04. Aaron Jones
Before the draft I queued up 18 players who I thought worthy of first- and second-round selections. When my pick arose, two of them were left: Aaron Jones, and Julio Jones. The wideout was a little higher on our overall board. But the way running backs were being taken, and with 20 picks until my 3rd-round selection, I thought the wideouts at 3.11 would be better than the running backs. So I took the Green Bay runner. I'm still not certain I made the right choice.

3.11. Patrick Mahomes
Discussing this draft with Ian last week, we mulled whether Mahomes should be considered in the second as a difference-maker at quarterback. We ultimately dismissed the idea, while basically not even considering him being available 21 picks later. He's generally going in the last second or early third even in experts drafts (where quarterbacks usually go later). Given what was left at both running back and receiver, I felt (and still feel) not taking him would have been simply irresponsible. Mahomes shouldn't fall to 3.11.

4.04. Tyler Lockett
5.11. Michael Gallup
6.04. Jamison Crowder
Not taking a wide receiver in the first 45 picks of a 14-team draft has consequences. When I selected Mahomes I was confident -- confident -- that Calvin Ridley, a top-6 wide receiver on our board, would be available at this pick. When he went at 4.03 to the other team that likes him as much as we do, Lockett -- also a top-10 wideout on our board -- had to be the pick. I understand some are scared away from Lockett because of DK Metcalf, but the chemistry between Russell Wilson and Lockett is strong and he's still going to be the go-to guy.

Gallup and Crowder are both top-25 wideouts on our board; Crowder is actually ranked higher, but I was confident he'd last longer. Maybe he'd have made it to the 7th round; I'll acknowledge I thought about it. But through 72 picks of the draft a total of six non-running backs or wide receivers were selected. Waiting another 20 picks and hoping Crowder was still there was simply too risky considering where he was on our board. Gallup will be the No. 2 in Dallas and Crowder the No. 1 (probably) for the Jets; definitely catch the most passes. I expect this pick to be criticized, which is fine. Just too high on our board to go elsewhere. Eleven more wide receivers were selected before I picked again.

7.11. Phillip Lindsay
When I took Crowder, the next running back on our board was Lindsay. So even though six running backs were drafted before the pick, he was an easy selection here. The Broncos are going to run a lot, and Lindsay is too good to be a mere handcuff. I expect he'll be a viable (if not ideal) starter in a lot of weeks. He was the 40th running back taken (28th in our rankings).

8.04. Hayden Hurst
Hurst is this year's Austin Hooper -- a tight end we're higher on than most. But he does have his fans, and was selected earlier than this in a couple of the week's experts drafts. It was very odd how experts in this one had minimal interest in either quarterbacks or tight ends. But selecting Hurst opened the floodgates a little, as five more went in the next round and a half.

9.11. Nyheim Hines
People are missing the boat on Hines. Philip Rivers is going to complete a lot of passes to his running backs. Jonathan Taylor is not going to get those chances (definitely not as a rookie), and Marlon Mack isn't either. Somebody is going to say that Taylor's hands are fine and Wisconsin just didn't take advantage of it. You are welcome to your opinion. Backs that aren't big part of the passing game in college seldom become Marshall Faulk as rookies. Hines might be a more reliable starter, if necessary, than Lindsay.

10.04. Dallas Goedert
I was the first one to select a second tight end. Maybe I could have waited another round? Goedert and Fant (drafted a few picks later) were the last top-10 options on our board. Maybe we miss on Hurst, or maybe both are so good that we start a second one in the flex spot a lot of weeks. The Eagles are going to play Ertz and Goedert together a lot. Should Ertz get hurt, Goedert will be a top-3 or 4 guy.

11.11. Dede Westbrook
12.04. Ryan Tannehill
13.11. Jalen Hurd
With only three wide receivers, I had to use two of these three picks on the position. Pickings were slim, but Westbrook should be the clear No. 2 in a Jacksonville offense that will be throwing a lot. Sixty-two wideouts had been drafted at this point, we had him 10-15 spots higher. Hurd may just be the primary beneficiary of the Deebo Samuel injury. Tannehill was one of just two quarterbacks left I actually liked as a No. 2. In retrospect, though, I wish I'd taken Jamaal Williams, the correct (I think) Aaron Jones handcuff, definitely in passing situations. I thought he'd last another round; he didn't.

14.04. Harrison Butker
15.11. Kansas City Defense
Both are top-3 options on our board. Defensive scoring for this league is sacks, takeaways and touchdowns, with bonuses for shutouts (which seldom happen) and smaller bonuses for allowing 7 points or fewer (which is also relatively rare). So basically sacks-takeaways-touchdowns, making Kansas City an excellent weekly starter. Week 10 bye for Kansas City, too, so these spots can be forgotten about for a while.

16.04. Jalen Richard
Talked about him on the site yesterday. It was either Richard or Larry Fitzgerald (who went undrafted) in this spot. Ultimately I saw more upside in the running back.

Regrets? Well, I wish I'd secured Jamaal Williams. Alternately, a small part of me thinks I should have taken Julio Jones over Aaron Jones, and then my team would look similar except probably have a Julio-David Montgomery combo rather than Aaron-Tyler Lockett.

But at the end of the day, I think this team will have the No. 1 QB, a pair of top-10 or 15 running backs, three top-25 wideouts, and a pair of top-8 tight ends. With good health, it will be a competitive roster.

What four quarterbacks have started playoff games for three different teams? None of these guys is active. One is a former first-round pick. Another is a former ninth-round choice. Two were originally not drafted at all and didn’t play their college ball at major schools. Three have played in this century, while the other last started in the mid-90s.