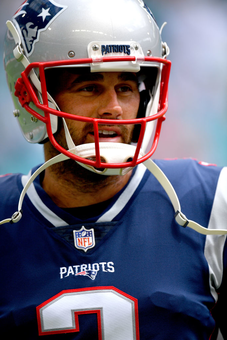 The Patriots released Stephen Gostkowski in the offseason, but he’s not done. He’ll likely be an opening-day kicker for some team. It shouldn’t be long before he signs somewhere.

Gostkowski is coming off hip surgery. That’s played a role in teams taking a wait-and-see attitude. They want to make sure he’s healthy before committing to him. That process got harder when the offseason was derailed by the coronavirus pandemic – limiting his ability to visit with teams.

Gostkowski says his hip is now 100 percent, and with the season just around the corner, it shouldn’t be long before he signs somewhere.

General Manager Jon Robinson says the Titans are interested in bringing in Gostkowski to compete for their job. “We certainly have confidence in Greg Joseph,” Robinson said on a local radio station yesterday.“Greg did a great job for us, came in there at the end of last year and did a great job. It’d be his job to lose but we want as competitive a position there as possible.”

The Jets, Colts, Bears, Giants and Rams also come to mind as teams that might have some interest. That’s just off the top of my head. The Bucs have already obtained a couple of other notable ex-Patriots (Tom Brady, Rob Gronkowski) but I think they’re comfortable with Matt Gay.

Whoever signs Gostkowski is getting a player who’s made plenty of kicks. He’s gone over 150 kicking points five times. Only 10 other kickers in league have gone for 150-plus points, and nobody else has done it more than once.

Those high-scoring seasons, of course, were fueled by high-powered offenses. He won’t get those kind of opportunities with his new team. And if we look at Gostkowski’s ability rather than his past production, he looks pretty ordinary.

Over the past five years, he’s converted under 80 percent of his field goals in the range of 40-49 yards. That’s below-average.

I like looking at the kicks in that range. Kicks inside the 40 are pretty easy – everybody tends to make them. And with the 50-plus attempts, you’re getting into difficult kicks that test a player’s range. At 40-49 yards, those aren't gimme kicks, and there are more attempts, allowing the best guys to bubble to the surface.

In the past five years, 23 kickers have attempted at least 30 field goals from 40-to-49 yards. All but nine of those guys have been more accurate than Gostkowski.

If we’re drafting today, I don’t think Gostkowski should be selected. Maybe if you’re in a 12-team league where everyone’s selecting two kickers, he would be one of the last chosen.

Even after Gostkowski signs, I doubt that he’ll be one of the top dozen kickers on my board, but we’ll see.