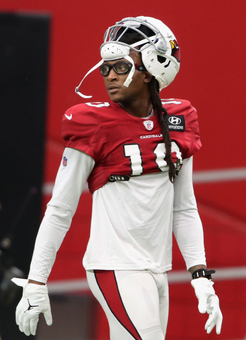 Ian Allan answers your fantasy football questions. In this edition: DeAndre Hopkins' big debut. How good is Gardner Minshew? Long-term prospects for Bryce Love and AJ Dillon. And should a Herr macht schnell for Benny Snell?

He had a nice debut – a career-high 14 catches for 151 yards – but many of the concerns I had in the preseason are still there. I didn’t see any downfield passing. There was one play on a busted coverage where he caught a 6-yard pass, then ran 33 yards down to the 1-yard line. He averaged 9 yards on his other catches. The 49ers were playing off coverage, and they hit a bunch of underneath stuff for short gains. In that offense, with the ball coming out quick (and him not having great speed), I don’t think he’s going to hit on many chunk plays. And I would think in that upcoming games, we’re going to see Larry Fitzgerald and Christian Kirk accounting for a bigger share of the offense. On the vast majority of those catches on Sunday, Fitzgerald or Kirk could have lined up and done the same thing. Are the Cardinals going to be consistently jamming the ball to Hopkins when they’re inside the 10? I’m not sure that they will be. And I’m not sure that it’s a team that will throw a ton of touchdown passes. Kliff Kingsbury seems to have a tendency to use spread formations to set up runs around the goal line. Since he showed up, Arizona has scored only 2 more touchdowns on passes than runs (a 21-19 mix after 17 games).

In the mag you say that it looks like Gardner Minshew will punch above his weight. Last year the Jags threw for over 4,000 yards and 24 TDs (Minshew for 80% of this as a rookie!). With the Jags looking like they will have to throw even more this year with less defensive talent don't you think they will have at least middle-of-the-pack numbers in passing – I think you have Minshew ranked about 25th on the latest ranking.

I’ve got a bad feeling that I’m going to end up outsmarting myself with Minshew. When I initially worked him up in the spring, he was solidly in the teens among quarterbacks in my rankings. He’s shown some ability, they’ll pass a bunch, and Jay Gruden has been good at constructing passing games. Minshew is also a clever scrambler, which helps him in comparision with less-mobile options (Rivers, Carr, Mayfield, Cousins, Goff). But Jacksonville has always loomed as perhaps the worst team in the league, which has been worrying, and our ranking was also way out of whack with where people were selecting him. So over the weeks and months, I steadily dropped him down my board, to where he ended up as the 25th quarterback at the end of the preseason. We’re just one week in, but that’s looking like it could be a key error. I will be interested to see how Minshew performs at Tennessee.

I drafted Crowder, but cut him last week in favor of taking a long-term chance on Bryan Edwards. Edwards didn’t do much, while Crowder had a huge game. I know one game does not a season make, but should I hang on to Edwards or swap him back for Crowder?

Crowder has a hamstring injury; he’s not playing in Week 2. But for the rest of this season, he looks a lot more likely than Edwards to potentially be an impact player. He’s going to see a lot of balls. Edwards started for the Raiders in Week 1, but they didn’t look his way much at all. In Jon Gruden’s first two seasons, guys like Zay Jones and Tyrell Williams have started for long stretches but have been little more than decoys. It seems like Edwards is being plugged into that kind of a role.

In a dynasty league it is almost impossible to find information on some players who have great potential. Like Bryce Love, who was a stud at Stanford, and the fastest RB in college, runnerup in the Heisman. Why is he not starting in Washington? Barber averaged a whopping 2 yard per carry week one. Barber is not a starting running back. Love should be the best RB in their house. Same can be said for Dillon in GB; they drafted him in early rounds for a reason. They haven't offered Jones a contract extension for a reason; he is in the last year of his rookie deal. So why is no one talking about Dillon? If they let Jones go to free agency they get a great supplemental pick and have Dillon to start next season.

Love will get some carries before the year is through. They don’t have a big-time back. Barber runs hard and has some experience; he’s a pro. But he’s simply not that talented; he’s a former undrafted free agent who had to work for his roster spot every year. The Bucs had no interest in bringing him back. J.D. McKissic is their best pass catcher, so he’ll get in there some in obvious passing situations. They seem to like their third-round pick, Antonio Gibson, more than Love. Gibson has the freaky athletic ability – a 228-pounder who ran 4.39 at the combine – but he hasn’t played a lot of running back. He was a wide receiver at Memphis (just 33 rushing attempts last year). With Love, I think he’s a little on the small side and doesn’t have elite speed. I think if you took him to the combine today and had him run a 40, he’d probably clock something like 4.55.

Dillon’s role in Green Bay will grow. He’s a big, rugged dude. He got 2 carries in their opener, and he gained 6 and 8 yards on them. There are two veterans ahead of him who have a better command of the offense. Jones and Williams are probably far more reliable in terms of pass protections and catching passes. But injuries usually happen along the way, and both of those guys are in the last years of their rookie contract. The plan is definitely for Dillon to be one of the top 2 backs in 2021 – maybe their starter.

I have question regarding waiver wire. If you select a guy off the waiver wire you move down to the bottom of the priority order. This week I am the third person down. Would you select B Snell or just wait until next week or the week after for something more attractive to come along?

I’m a big Snell fan. I think at some point he’s going to be a starter and a good player. Perhaps or probably he will dislodge James Conner – they’ll both be healthy, and Snell will be the starter. The Steelers are more fantasy-friendly than most teams in that they tend to rely on one running back heavily, rather than shuffling guys in and out of the game. So I would be inclined to use my waiver resources to obtain Snell, thinking there’s a good chance he’ll help my team at some point. But I see on the injury report that Conner (ankle) was a full participant at practice on Thursday. So I can’t guarantee the transition will happen right away.

My question is around Michael Thomas. You still kept him ranked in the top 2, but in the writeup you predict him to miss 2 games and be hobbled by this injury. Realistically, how is he going to live up to that ranking with that injury? Especially, if he's going to try and rough it out. The last thing any of us want is a first-round decoy. If you could trade him, what would you expect back (PPR) and would you trade him?

When Thomas is healthy or reasonably healthy, he’ll be a top-5 receiver, catching a lot of balls. Whether that’s in Week 3, 4 or 5, I’m not sure. I downgraded him only slightly on the rankings that went out on Tuesday. (That was the day after Thomas was saying he expected to be fine.) There was speculation on Tuesday that Thomas might miss multiple games, but I wasn’t sure if it was true, so I didn’t factor it in too heavily in the rankings. If I were drafting in a PPR league today, he would still be a top-5 receiver on my board.

I am in a 10 team PPR keeper league. I have ended up three Seattle Seahawks on my team. Russell Wilson, Chris Carson and DK Metcalf. I was wondering what your thoughts are on playing all of them in a weekly lineup? I usually follow the weekly rankings, but I worry that I'm going to blow the week if the Seahawks have a bad game!

I think you’re going to be just fine. That’s going to be a very good offense – likely one of the top 5 in the league – and you’ve got three of the four big pieces. The only one you’re missing to complete the set is Tyler Lockett. In some ways, you might think a Seattle-based offense makes you streaky. But in some ways, it might make you more consistent. In weeks where Carson doesn’t run for any touchdowns, for example, Wilson should throw multiple touchdowns in almost all of those. And if there’s a week where Wilson doesn’t throw any touchdowns, chances are that’s probably a game where Carson ran for a touchdown. You’re playing PPR, and Carson’s looking up in such a format. He posted the best pass-catching numbers of his career in Week 1.

Been a subscriber for over 25 years now and have always attributed a lot of my success over the years to the Index. Just made a trade that based on Index rankings, was an absolute steal, but looking at every other ranking out there, it's a huge mistake. Looking for a little reassurance here :) I gave up Ingram (RB28) and DJ Moore (WR25) for Nyheim Hines (RB11) and Tyler Lockett (WR7) in a HPPR league.

I think you’re in good shape. Lockett is simply better than Moore – a far better offense, with Russell Wilson perhaps throwing 15 more touchdown passes than Teddy Bridgewater. And the usage Hines gets in the passing game, I like him better than Ingram.

I have Michael Thomas, Ridley, Sutton, Parris Campbell and Deebo. When Deebo comes back should I drop him or Parris Campbell? Also Out on the waiver wire is Robby Anderson, Scott Miller, Lazard, Mike Williams and Scantling.

I would wait for Deebo Samuel. There’s risk with the foot, of course. But if he can get right physically, he might turn into a top-10 receiver for you. Campbell had a nice opener for the Colts, but I’m not sure exactly where he’ll fit in. To me, he looked pretty similar to T.Y. Hilton in the opener, but at the same time, I can’t yet guarantee that Campbell will be better than their other two wide receivers (Michael Pittman and Zach Pascal).