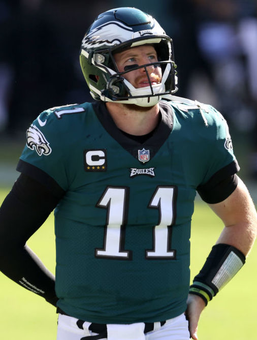 Ian Allan answers your fantasy football questions. In this edition: When do we pull the plug on Carson Wentz? Does Jordan Howard have an NFL future? Is it a good idea to sell high on James Robinson? And more.

Long-time fan of the Index. I'm wondering what you think of replacing Carson Wentz with Fitzmagic. It seems the veteran really understands the offense and he's not afraid to sling it around or stick his nose into the endzone. Also, do you believe he'll keep his job through the season barring an injury?

If we’re looking at October, you would definitely take Fitzpatrick. With the kind of passing production the Seahawks have been allowing, I’m thinking he might be a top-10 quarterback this week. A week down the road, Wentz is at Pittsburgh, and I would want no part of that. But I think the Dolphins will want to get Tua Tagovailoa in the lineup this year. I would be surprised if they don’t get him in there before December. So if you’re switching over the Fitzpatrick, it should be with the understanding that you’ll be making another quarterbacking move later in the year.

It appears that I stole James Robinson in RD14 of a 12-team draft. I am thinking of selling high, now that I have lost Sutton as my WR3. We have to start three WRs, and I am now left with a collection of ragtags: Harry, T.Smith, Hamler, Beasley and Edwards. One of them might pop, but I can't wait around for three or four weeks to find out. Please give me a few WRs you might be seeking in a deal for Robinson.

Jacksonville is playing at Cincinnati this week. The Bengals rank next-to-last in run defense. (They were last in 2019.) He seems to be queued up for another big game. So while you can trade Robinson today, his value might be even higher next week. I would think you would able to trade him for a top-20 wide receiver. I would start by looking at the rosters of the teams in your league that are light at running back.

What are your thoughts on Jeffery's value (PPR) now that Jalen Reagor is out multiple weeks?

Jeffery has been practicing some, so presumably they’re expecting him to return before long. (Had they known Jeffery wasn’t going to play until October, they could have put him on IR, freeing up a roster spot.). But Jeffery didn’t practice at all on Thursday, so very unlikely we’ll see him at San Francisco. They certainly need some pass-catching help. Reagor isn’t only out, he’s also a rookie – they don’t want to ask him to do too much too quickly. Dallas Goedert is now likely out until November. DeSean Jackson is 33 and has had problems staying healthy. Greg Ward is a neat story – a former college quarterback who was playing in the AAF – but he’s more of a contributor rather than a player than anybody fears. When Goedert and Jackson left the Bengals game early, it was pivotal in the Eagles failing to get a result against an overmatched opponent. If they could get a little something out of Jeffery, it would sure help. In his last 16 full games (in the 2018-2019 seasons) he’s caught 79 passes for 992 yards and 6 TDs. On the downside, Jeffery in recent years was a lot more effective when Nick Foles was at quarterback – didn’t have the same rapport with Carson Wentz. In general, in a 12-team league I think Jeffery makes sense as a stash prospect (but hopefully on somebody’s else team rather than my own). Unlikely that he’ll develop into much, but maybe.

Your thoughts on Jordan Howard? I picked him up late in the draft. I thought I got lucky with a starting rb with 3.5 years in the year. Do you think this is system’s problem for him? Could he move on after this year?

I don’t think he fits today’s game. He’s not what the vast majority of teams are looking for. A big guy with some power, but not enough elusiveness or pass-catching ability. Looks similar to Alfred Morris, only six years younger. Looking at the bio on Morris (who’s currently on the Giants’ practice squad), his last relevant season was in 2014 – six years ago.

I have Chris Carson and Carlos Hyde. Who's the better play this week given Carson's 'injury'? Is he even going to suit up?

Carson has been practicing. Pete Carroll says he looks fine, and that he’s going to play. Would not surprise me, though, if Hyde sees a little more playing time than usual this week. If I had them both, I would have been wishing they’d just given Carson the week off. But it doesn’t look like that’s going to happen – you’ll likely have to start Carson.

What current non-starting QB do you see as the best stash for a 2-QB league? Running with Wilson and Fitz and am always on guard about how long Fitz will last. All current starters are rostered so I’d be taking a gamble on picking the right backup. Tua is rostered. Would it be Hill, Winston, Stidham, Keenum, Brissett?

How about Kyle Allen? Dwayne Haskins was pretty awful last week in Cleveland, maybe costing Washington that game, and Ron Rivera said something about his patience starting to run out. If they were to plug in Allen, I would think he’d be a more effective passer. Allen worked with that coaching staff last year in Carolina, averaging 252 yards in his 12 starts, with 17 TDs. If we’re going more for upside, then Taysom Hill. Drew Brees is physically right at the end of the road. In the unlikely event Hill were to take over there, he might put up top-10 quarterbacking numbers.

Keeper league. I picked up James Robinson, who promptly scored twice last week. Would you trade him straight up for Joe Mixon, who has done very little so far?

I would take Mixon. I think he’s a better running back – probably one of the 10 most talented players at that position in the league. It’s just a matter of them getting their offense properly dialed in. I think that will occurred. With Joe Burrow at quarterback, I think that’s a team on the rise.

I would like your take on the following dynasty WRs: Metcalf - STUD, should have a top-10 year. Slayton - The Giants have the toughest first four games on any team, so I am hoping he will get better. Campbell - Started strong, looked like Rivers favorite target. It is too bad he is now going to miss most of the season. Preston Williams - He isn't being targeted like he was last year. Is this due to his not being 100 percent?

Looks like you have the guys sized up properly. Agree on Parris Campbell. I’m not counting on him doing anything this year, but he potentially could be their most productive receiver in 2021. With Williams, he’s huge like DeVante Parker, but he doesn’t have the same kind of speed. And they’ve got a new offense this year. But they’ve been using him around the goal line. The two weeks, when the team’s been inside the 5, I’ve seen him catch a touchdown and a 2-point conversion, with another touchdown dropped.