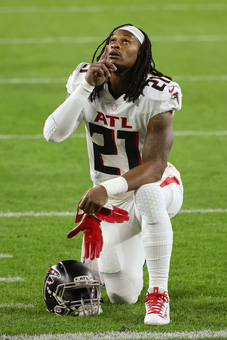 Which strong starter will disappoint the rest of the way?

ASK THE EXPERTS appears weekly from training camp through the Super Bowl with answers to a new question being posted Thursday morning. How the guest experts responded when we asked them: Which strong starter will disappoint the rest of the way?

I wish you had asked this last week, so I could have begged people to shop Odell Beckham. I'll still pitch the angle. His blowup game at Dallas only included one touchdown pass from Baker Mayfield (which makes it less likely to be a strong signal for future performance). The Browns are trying to win via a solid defense and a sturdy running attack. Beckham is going to have a lot of decoy games, and some games where he's open and Mayfield misses him. I'd posit Beckham has been notably overrated for about three years.

Matt Ryan started off like a house afire this season, so it was easy to give him a pass in a horrible week 3 loss as an isolated incident. Additionally, he had a favorable home matchup against Carolina on Sunday. However, he was abysmal again, everybody got fired, he's 35, and still has some guaranteed money coming. Ryan may have a few games where he picks up garbage time points, but better to bail now, cut your losses, and get what you can.

I’m not a Todd Gurley fan. I don’t think he’s anything close to the player he used to be. He’s lost some juice. I realize he just went for 121 yards, averaging over 8 yards per carry, but I see a worn-down guy on the decline. So while he’s scored 5 TDs in five games, I think the time to move him is now. He’s just a guy, I think, and he’s also parked on one of the league’s lesser teams.

Keenan Allen isn’t on any kind of crazy pace — per game he’s doing what he always does — but his season has been incredibly uneven so far: from 19 (!) targets in Week 3, when it looked like Justin Herbert might not have eyes for anyone else, on down to the early exit with back spasms this past Monday. Not that Allen will fall far off from here, but there are several reasons to believe he won’t be the stud he looked like at this time last week. The back issue itself could always recur. Allen has never been a big touchdown guy; he’s been stuck on 6 for three seasons running. And other receivers on this roster are a better natural match for a young quarterback who throws a beautiful deep ball (hello, Jalen Guyton) and will throw a pass up and let his best leaper high-point it (hello, Mike Williams). Again, I’m not pushing the panic button. But Allen is not quite the stud you might have been banking on.

I want out on the Saints. They're 3-2, but were lucky to beat the Chargers and I don't think they're as good as the Bucs. Drew Brees looks cooked to me, and now we've got Michael Thomas fighting with a teammate. When Thomas returns I suspect he and Alvin Kamara will be fine, but I think it's time to get what you can for Brees, Jared Cook and Emmanuel Sanders -- those guys aren't going to be putting up good numbers regularly. Saints come out of their bye against the Panthers, Bears and Bucs again. I think they lose 2 of those games and look mediocre on offense while doing so.