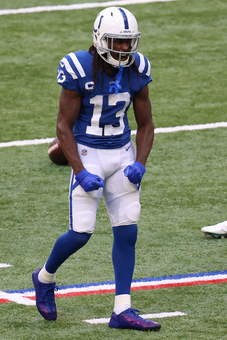 Which slow starter will turn things around?

T.Y., Deebo and other veteran wideouts

ASK THE EXPERTS appears weekly from training camp through the Super Bowl with answers to a new question being posted Thursday morning. How the guest experts responded when we asked them: Which slow starter will turn things around the rest of the way?

T.Y. Hilton. Why? His talent will shine through, and they will need him to win most games for the rest of the season.

I like Deebo Samuel to come on strongly for the rest of the season. He's been out - that's really slow - and returned in Week 4. The 49ers have a great passing schedule and a desperate need to get more from the wideouts. Once Garoppolo returns in a week or so, Samuel should resume where he left off in 2019.

T.Y. Hilton was supposed to finally break out of his funk in Week 4, but no dice. His targets are down, the Colts defense is really good, and they are a run-first offense to control the clock. But Indy's receiving corps is banged up, so Hilton remains the unchallenged No. 1. Looking ahead, Week 5 brings the horrible Cleveland secondary, plus future games against Cincy, Detroit, and Houston (twice). In fact, of his future opponents, not one has a pass defense currently rated better than 13th. If the Colts want to do more than just contend, they have to have more run/pass balance, so it is essential that Hilton returns to form.

David Montgomery hasn’t made much of an impact yet this year. And I would be leery of starting him in the Thursday night game (given the way Tampa Bay tends to shut down the run). But I still believe in the player. He’s a good, tough runner, and he should also be consistently involved as a pass catcher. (With Tarik Cohen out for the year, the Bears don’t really have much else at the position). I think we’ll see him trending upwards in the coming weeks.

Alshon Jeffrey, wide receiver, Philadelphia. I mention the position and team because he has missed the last eight games going back to 2019 so he is pretty far off most fantasy teams' radars. So there is nowhere to go but up. Why do I like him to rebound? He is close to getting back on the field. Real close. Once healthy he makes for a great target for Wentz as the Eagles offensive line collapses and they play from behind. Plus the schedule eases up tremendously in a few weeks so a healthy Jeffrey could be a difference maker.

I'm not giving up on Kenyan Drake. In the leagues I have him I made sure to secure Chase Edmonds, but I still believe they can get Drake back to putting up the kind of numbers they did last year. How about a matchup with the reeling, sorry Jets to get him going? I'm also optimistic about Damien Harris. If he plays well the next few weeks I think the Sony Michel era, such as it was, quietly comes to an end in New England.