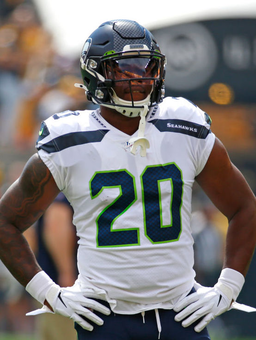 12-team dynasty league. Drafted Rashaad Penny as a rookie. With Carson's play and Penny being hurt, have not even had him in starting lineup. He's on IR (PUP) right now and not sure what's happening rest of year. Is he worth hanging on to in this type of league or is he a first-round bust?

Penny shouldn’t be much of a factor at all this year. I’m not sure he’ll even step on the field. I think they’re comfortable with Chris Carson as their starter and Carlos Hyde as one of the better backup tailbacks in the line. If one of those guys gets hurt, then we can start mulling whether Penny might be ready to move up into the backup tailback spot. He tore his ACL last year and opened the season on the PUP list. Pete Carroll said something a few weeks ago about Penny coming along nicely, so supposedly he could re-join the team for practices soon. But if you’re keeping Penny in your dynasty league, it’s not for 2020. It would be for 2021. Clearly, there’s no way the team will be picking up the fifth-year option on his contract (Penny was a first-round pick in 2018, so for the Seahawks to lock him up through 2022, they would need to commit to paying him the average of the third through 25th highest salaries at running back in the 2020 season – that’s not going to happen). So Penny will come back healthy for training camp in 2021, knowing that he’ll be hitting the open market the following spring. I would expect he’ll be their second-string tailback at the start of 2021, and he’ll be looking to put on a show when he’s out there. If we’re ranking the backup tailbacks for 2021, Penny would be one of the first 10 you would select, I think. Whether that’s enough for you to continue keeping him around, I’m not sure. He’s shown flashes of big-time ability at times.

Can you provide a little more insight as to why you have Melvin Gordon ranked so low? He’s been pretty good so far and while he’s not on the best team, he was a top 5 rated overall player last year. He hasn’t been hurt and also had another RB he shared time with.

Phillip Lindsay is the key. He suffered a turf toe injury in the first half of the season opener, allowing Gordon to be used more heavily. Lindsay is healthy now, so I think that for the remaining 11 weeks, you’ll see more of a one-two punch backfield. I’m not certain that Gordon is even the best back on that team. When he sat out on Sunday, Lindsay was very effective at New England, keying that upset with 101 rushing yards. With these two backs, Gordon is a little bigger and more experienced, and he’s better in the passing game. Lindsay is definitely quicker and might be faster. (That is, Lindsay is really quick to the hole, but I’m not certain that he would beat Gordon to a 40-yard dash.) For whatever it’s worth, Lindsay is in the final year of his rookie contract, so how he performs will play a role in how negotiations transpired in the offseason (completing his third year, Lindsay will be a restricted free agent – still a year away from true free agency). With Gordon, I don’t see a top-level asset. That’s a lesser team – a possible bottom-5 offense – and you’ve got a pair of pretty comparable backs sharing time. I’ve got a lesser grade on him, and that’s powered more by the team and the expected production, rather than any concerns over him charged last week with drunk driving. On the DUI front, the team says it doesn’t intend to discipline Gordon; he could still face a suspension by the league.

I've been sitting on Michael Thomas and now it looks like he may finally play! So of course, I'm now flooded with trade offers. I still think he's a top 5 WR the rest of the way. What do you project?

Yes. Definitely a top-5 receiver – up there with guys like Davante Adams, DeAndre Hopkins, DK Metcalf and Stefon Diggs. Thomas is about as likely as anyone to lead the league in receptions during the second half of the season. If you were walking into a PPR draft today, no way would Thomas make it past the middle of the second round. So if you’re going to deal him, you should be getting something pretty sweet in return.

OBJ or Allen Robinson rest of year? Trade deadline is coming up.

Robinson definitely will finish with more catches and yards. They pump a lot of balls his way in that offense. Beckham definitely will score more touchdowns – he’s got a lot more ability to get downfield for big plays, and they use him more in the red zone. The Bears, for reasons, I can’t explain, like to turn their attention to other pass catchers when they’re around the end zone – they prefer Jimmy Graham on fade routes. Graham has caught half as many passes but twice as many touchdowns. Unlike Beckham, Robinson doesn’t have the speed to get downfield for touchdowns from 40-plus yards. (I suppose that’s partially Robinson’s speed but also the structure of the offense – they don’t run the ball enough to set up the play-action opportunities for those kind of plays.)

I would appreciate your opinion regarding flex options: A Peterson, Damian Harris and M Hardman

They’re all streaky guys. With Hardman, he’s going to hit on some big plays, but there will also be weeks that he’s not involved much at all. He was extremely disappointing on Monday night, not playing much at all despite Kansas City being without Sammy Watkins. With Harris, I think he’ll punch out some rushing yards at times, but I don’t think we’ll get to the point where you can count on him for much receiving production or to consistently get carries around the goal line. Peterson is 35, and I wonder if he’s physically wearing down. He averaged over 5.8 yards in each of his first two games, but he’s been under 3.5 in each of his last three. I think the Lions are starting to transition to D’Andre Swift, now that he’s getting a better command of the offense.

I am in a TD-dependent keeper league. I picked up Tee Higgins based on his red zone size and opportunity with Burrow throwing a lot plus Green getting phased out (hopefully). DJ Moore was made available yesterday. Would you swap Moore in for Higgins? Moore gets targets though lacks in TDs and may have fallen behind Robby Anderson as the WR1. Thoughts?

With both guys, I think you’re talking about players who’ll catch about a quarter of their team’s touchdown passes. That is, if they throw 12 touchdowns, they’ll catch about 3 of them. So I would go with Higgins, figuring that the Bengals will throw a few more touchdowns than the Panthers. And of these two, I think Higgins is a lot more likely to potentially get a lot better in 2021.

It's bye week dilemma time. I've got one RB I can play (D’Ernest Johnson from Cleveland). Chubb -- IR. Ingram -- bye/bust. Gaskin -- bye. Mattison -- bye. I've got free agency moves queued up to drop Johnson and pick up Boston Scott. I've got another free agency move to drop the Rams DST and try to get Hasty (SF RB). Then I've also got Justin Tucker. He's also on bye. I can't afford to drop anybody else get a backup kicker. I lost Dak to injury for the year. I've got Dalton and Burrow. My other bench spot is Gallup. I've got Amari Cooper and AJ Brown as starting WRs, and Will Fuller in the flex. My choices -- (1) go without a kicker this week, (2) drop Ingram and pick up a kicker, (3) drop Gallup and pick up a kicker, (4) go with just one RB and pick up a kicker. My thinking is drop Ingram. Advice?

I don’t like taking intentional zeros. If you go without a kicker every week, there definitely will be a few games that turn from wins into losses. I wouldn’t want to risk that. So I think the play is to float one of those lesser players onto waivers for a week. Maybe you end up re-signing that guy next week. I would be comfortable going that route with Ingram, Gallup and even Dalton. Dalton didn’t play great in his first game, and I don’t expect he’ll light up Washington on Sunday. I would suggest, in fact, that you released two of those three games, while keeping the Rams defense around. When the Dolphins return to action in Week 8, with a rookie quarterback, it will be the Rams they’ll be playing against – it would be good to have them around for that game.

1/2 point PPR. Should I trade Tyreek Hill for Jonathan Taylor? At wide receiver, I have DK Metcalf, M Williams, T Higgins and Mar Brown. My RB are McCaffrey/Davis, Montgomery and J White.

I would stick with Hill. He’s an elite player, and one of the key pieces in maybe the league’s best offense. I wouldn’t trade that for the hope that Taylor starts playing more like what people have been hoping for. The Colts haven’t been able to get their running game quite dialed in.