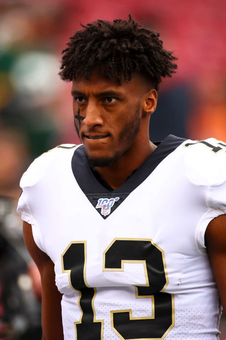 Can you break down your thoughts on the Cowboys offense going forward now that Dak is out? Obviously you have to downgrade everyone at least a little bit, but that defense is atrocious and the Cowboys will be throwing every week. Curious to see how much your offensive projections will change.

Andy Dalton is a good quarterback. He won 10-plus games four years in a row in Cincinnati. He might be the best backup quarterback in the league (the other candidates, I suppose, would be Case Keenum, Joe Flacco, Dwayne Haskins, Tyrod Taylor and Jacoby Brissett). The Cowboys are overloaded with pass-catching talent, and they’ll be throwing it. As you point out, they’ll also be allowed in a ton of high-scoring shootouts. I won’t be surprised if Dalton posts top-10 quarterbacking numbers in the second half of the season.

Do you feel like Michael Thomas' behavior in practice (fighting with a teammate) is going to mess with his role on the team? They clearly need him out there, and he seems healthy, but they also don't want to support or reward him if he's acting like a punk. How does this look going forward?

We only hear snippets of what’s going on. Thomas punched a teammate. The Saints sat him down for a game. Supposedly he’s been hard for some coaches to handle. But we don’t really know the details. Looking back, it’s now clear that Antonio Brown was a major pain for years in Pittsburgh, yet they were able to manage that and still get huge production out of him. I wouldn’t be too concerned about Thomas for 2020. He’s their best pass-catching weapon, and his big body and playing style fits really well with Drew Brees’ limited arm strength. I would think Thomas is about as likely as anyone to lead the league in receptions in the second half of the season. But don’t look for any touchdowns from 30-plus yards, given his lack of speed and Brees’ popgun arm.

With all the young quarterbacks seeming to have bright futures flooding the NFL in the last few years, where would you rank Justin Herbert (including the group coming out in 2021)?

I don’t see a lot of separation between these guys. There are a lot of good ones. Trevor Lawrence will be the No. 1 overall pick, and he would be picked before the vast majority of No. 1 overall picks. He’s a Manning-Luck type of prospect. But Burrow and Herbert are playing well enough, that I would put them ahead of Lawrence. They’re a year ahead in their development, and they’ve shown that they can do it. I’ll go Burrow first, but I don’t feel strongly about it – Herbert looks like he’s the real deal. I’ll call Burrow-Herbert-Lawrence the top tier of the young arms, but there are plenty of other good ones. Justin Fields would be a strong No. 1 overall pick in most years. He threw 41 TDs vs. only 3 interceptions last year, and he’s got great size and mobility. Only slight concern is how he transitions out of that simplified offense they run at Ohio State. Dwayne Haskins put up big numbers in that system. To me, it’s reasonable to debate whether Fields or Tua Tagovailoa will have a better career. Tagovailoa is a smaller quarterback but doesn’t move like Russell Wilson or Kyler Murray. If you’re emphasizing size, arm and mobility, you would take Fields of Tagovailoa. I don’t see a lot of difference between those guys, but I will roll with Fields. And Trey Lance and Kyle Trask would need to be in this discussions. Lance is coming out of the same North Dakota State program as Carson Wentz, and at this point in his development looks better – threw 28 touchdowns last year, with no interceptions. Kyle Trask of Florida will be a first-round pick. I don’t know much about these guys; I haven’t looked at them closely. But right now, I would take Lance and Trask before Jordan Love.

You have ranked Tyler Lockett high. Yes, he did "break the bank" for me week 3. Unfortunately, the math has not worked out the past 2 weeks. Not sure why? Maybe the "Metcalf syndrome"? I value your advice. However, I may be dubious if your advice ranks him high again this week. Would love to hear your thoughts.

The Seahawks are a good team, and they’ve got it all dialed in right now. Russell Wilson is on pace to finish the season with 61 TD passes. Tyler Lockett is on pace to finish the season with 96 catches for 1,094 yards and 11 touchdowns. He’s a good player, and he’s been working with Wilson for years – there’s a trust and rapport there. So I would think at the end of the year, Lockett will be one of the 10 most productive wide receivers in the league. That doesn’t mean he’s going to be a top-10 receiver in all of their remaining games. There will be some down weeks, of course. But over the duration of the season, I think you’ll be happy if you just leave Lockett in there.

What's the realistic time table on Dallas Goedert and Alshon Jeffery's return? I have bye week issues and would like to hang on to them if possible.

Goedert fractured his ankle in Week 3. He’s eligible to come off injured reserve next week. There have been couple of optimistic reports about him, but there’s nothing solid. I don’t know about Week 7, but I would think he should be back on the field and doing Dallas Goedert things after their Week 9 bye. Jeffery suffered a Lisfranc injury last year – a broken foot. He’s been doing some things in practice for a few weeks. The team presumably feels there’s some chance he’ll return soon, otherwise they would have placed him on injured reserve, opening up that roster spot for at least three weeks (unless there’s some disclaimer in the labor agreement that I’m not aware of). As well as Travis Fulgham played on Sunday, and with Jalen Reagor coming back from his torn thumb ligament, I’m not sure where Jeffery will fit in. They’ve also got DeSean Jackson and some other guys. I think Jeffery’s time in Philadelphia has passed – not a player I think you should be carrying on your roster.

I have depth at QB. My starting QB is Russell Wilson with Cam Newton as my backup. I’m in need of WRs. I have Diontae Johnson, A.J. Brown, and Marvin Jones. What are your thoughts on trading Cam Newton for Deebo Samuel?

I see some sense in it. Newton is a good quarterback. With the way most fantasy formats richly reward rushing production, Newton might be a top-10 quarterback. But you already have a great quarterback, and that’s a position where you can find some decent guys on the waiver wire. Andy Dalton, for example, just became viable. So I would think it would be good for your team to bring in Deebo Samuel as another pass-catching possibility. The 49ers have been underwhelming, and I don’t think they’re going to be able to get back on that this year, but Samuel could reasonably round into form before long to where he’s outproducing both Johnson and Jones.

With Dak Prescott's ankle injury being so serious, I don't see the Cowboys franchising him again, so he's likely going to be a free agent next season and will need to show the league that he's back to form. Do you see him returning to the Cowboys under a new contract or will he end up being lured to another team needing QB help?

It’s an interesting thought. If the Cowboys were to let Prescott hit free agency, what would be the market for him? Colts, Bears, Broncos, 49ers, Jets, Falcons, Washington – would there be a team that wanted to sign to a mega contract? But I expect he’ll be back in Dallas, and I think he’ll be healthy long before the start of the 2021 season.