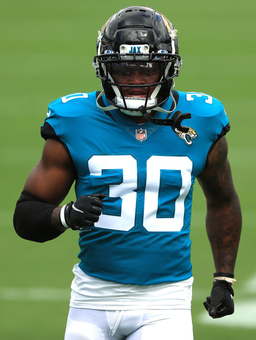 Who are this season's biggest tricks or treats?

ASK THE EXPERTS appears weekly from training camp through the Super Bowl with answers to a new question being posted Thursday morning. How the guest experts responded when we asked them: Special Halloween Edition! Who are this season's biggest tricks or treats?

Here are four main treats. Ryan Tannehill, James Robinson, Tyler Lockett, T.J. Hockenson. All have far surpassed their ADPs and still have some room to go. Tannehill, Lockett and Hockenson were all about 20th overall at their position yet are top 5 in the stats at the moment. Lockett after his 53-point week is No. 1 in wide receivers. As far as tricks go I would vote Kenyan Drake. Drake is RB22 at the moment.

Kenyan Drake has been a mess, though his coach, Kliff Kingsbury, has stood by him. Only because of injury (obviously nobody roots for that) will frisky Chase Edmonds get his starting chance, after Arizona's bye. Drake's numbers would look even worse if not for the gift garbage-time touchdown the Cowboys handed him a few weeks back. James Robinson gets the plus side of this answer, a late-round pick or FA grab who's turned into a Top 5 back in any scoring format. In a year where the wire has been a little stale, Robinson has pushed the needle significantly.

The biggest treat of the season for me has been watching all of these rookie receivers show what they can do. We may get the occasional 1-for-negative-2 game from Chase Claypool, but even then he almost kept pace with D.K. Metcalf this past week. Receivers are only supposed to make themselves known in Years 2 and 3 anyway, right? Biggest trick — and this is saying something in the age of weekly Covid cancellation concerns — is another receiver, not a rookie, who has produced all of 17 yards through seven (and probably eight) weeks. Not naming names, but it rhymes with “I hate Michael Thomas.”

TRICK. I’ve been undermined by Hollywood Brown in a TD-only league. We give credit for long touchdowns, and I figured he’d be generating some of those. As we reach the halfway point of the season, he’s been catching a decent number of passes, but that entire passing game has underperformed and he hasn’t been used much in the red zone — just one touchdown all year (and it was a short one). For my TREAT, I’ll go with Kyler Murray. I don’t know that what he’s doing is sustainable — an undersized quarterback on pace to finish the season with 1,000 rushing yards and 16 TDs. But it’s been a fun ride for the first half of the season.

The greatest treat is Seattle's dynamic duo of Lockett and Metcalf. Both already have over 500 yards receiving and have combined for 12 TDs to date. For Honorable Mention, there was a treat among the RBs, namely Chris Carson and Aaron Jones, until this past week when the injury bug bit them both. Conversely, the greatest trick to date is TY Hilton. He has less than 250 yards and 0 TDs. Hilton has plenty of company in the trick category this season, with too many Honorable Mentions to list. Looking at you Zeke, M-Thomas, Saquon, Cam...

The greatest treat to me is James Robinson -- a guy I picked up for almost nothing right before the season started and he's currently the No. 3 fantasy RB. My early drafts this summer had me taking Leonard Fournette when he was still a Jaguar. Robinson made that sting hurt a lot less. The biggest trick of the first eight weeks is easily Christian McCaffrey. The one year I get the No. 1 overall pick in a few leagues and McCaffrey flames out after two games.

Kyler Murray and Russell Wilson stand out as the biggest treats -- quarterbacks available a couple or three rounds after the top 2 who have been so consistent and productive it's scary. James Robinson also qualifies; a player not drafted (in the NFL or fantasy leagues) who's been a quality starting running back. And Justin Herbert and Joe Burrow must be mentioned; especially Herbert, who was supposed to need a lot of development. Tricks, so many candidates. Ravens running backs leap to mind; three worthless players in what was a record-setting ground game a year ago. But it's hard not to vote for Michael Thomas, dealing with the longest ankle/hamstring/head case issue in recent memory. To think I could have drafted teammate Alvin Kamara at No. 4 overall instead.