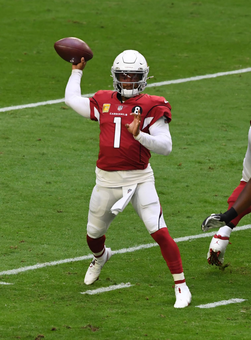 Points explosion! What is the biggest reason?

ASK THE EXPERTS appears weekly from training camp through the Super Bowl with answers to a new question being posted Thursday morning. How the guest experts responded when we asked them: Scoring is up around the league. What do you believe is the biggest reason?

Forward-thinking NFL teams are adapting to the college game that emphasizes offense, with defense an afterthought. Look at the 2020 college game and observe the defensive secondaries. Tackling has been replaced by chasing and grabbing, so good defensive backs are fewer, and average to poor ones are plentiful. Poor coverage, lousy tackling, no training camp, rules slanted to the offense--not a mystery why scoring is up, both in college and the NFL. More pure athletes are taking over the QB position, RBBCs are the norm, WRs with top-end speed are more common, and defense is basically an afterthought. Offense is king, on the field and in fantasy, and we will see more and more teams modeling themselves after KC and Arizona.

Well, one big reason is the fact that the NFL instructed their referees to NOT call holding penalties as stringent as they were in previous seasons. That, and the fact that there was no preseason led to the offenses actually being ahead of the defenses early in the season. Also, running QBs emerging like Kyler Murray and pin-point passers like Justin Herbert have defenses scrambling. Things will calm down a bit, but the NFL likes high scoring, so this may be here to stay, at least for teams that have high talent at the QB position.

The passing numbers are up, but the stats for the top receivers are not. That reflects that defenses are less able to slow down a game because of the increased rate of injury in the NFL plus the COVID-19 absences. This past week there was only one running back that broke 100 rushing yards - Dalvin Cook. And yet 15 receivers had over 100 yards. In Week 9 of 2019, there were nine 100-yard rushers and only eight 100-yard receivers. That because defending the run is a fundamental task that doesn't require nearly as much precision and cohesive team-work as defending a pass requires. I'll expect that the passing stats calm down in future years. This is just a product of insufficient practice time this summer and often during the season, coupled with a far higher rate of injury and player absences due to COVID-19.

It's a bunch of things, of course. It's almost impossible to play defense - the hitting zone on a player is a postage stamp, and the speed of the game is ridiculous. A wave of athletic quarterbacks have taken over the league, and those quarterbacks realize that running is a cheat code - it's basically illegal to hit these QBs most of the time. It also helps that offenses are more aggressive, utilizing pass-happy formations and finding smart coaching minds from the college ranks. Slowly but surely, the league is becoming more efficient, and taking advantage of a game where most of the rules favor the offense. Pinball is going to rule for a long time.

I think there are several factors, one of which is very gifted young QBs who have been given the keys to the offense earlier than in the past. These athletic gun slingers/play makers/rushing QBs help facilitate the passing game and combined with rushing form a dynamic duo fantasy points wise. Are there other trends? Sure, offensive penalties are down (especially holding penalties). This alone means the offense does not face a long down and distance as often. Thus helping keep that drive going longer. Another factor the "No guts, no glory" mentality of some of the coaches this year. They are going for it much more on 4th down and getting those chains moved. This helps the offense score that little bit extra and keeps that QB on the field longer...accumulating more stats. Finally injuries and Covid-outs are affecting defenses and they are giving up more. Will it continue in future years.....jury is still out but I think some it carries over. Which part? You decide.

I think the talent of the quarterbacks around the league needs to be acknowledged. For the last decade we've seen more examples of veteran passers excelling into their late 30s and even 40s. Combine that with the talented rookies and second-year players stepping out of college and into putting up big numbers right away, and there's really a lot of great players running offenses right now. Then you add in all the little things: rule changes and officiating that help passing games. The absence of crowd noise in a pandemic season. But I really believe it starts with talented quarterbacks, and everything else spins out of that.

Ian Allan answers your fantasy football questions. In this edition. Taysom Hill could be a secret weapon tight end in some fantasy leagues. Or not. When does one cut bait on a struggling rookie running back like Jonathan Taylor? Adding punters to fantasy leagues. And more.

Washington during the Super Bowl era has had on its rosters eight different players selected No. 1 overall: Alex Smith, Irving Fryar, George Rogers, Ki-Jana Carter, Jeff George, Dan Wilkinson, Steve Emtman and Bruce Smith. What is the only franchise that has used even more such players?