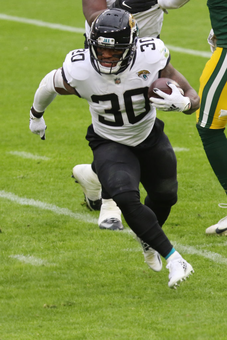 Who has been your favorite nobody from 2o2o?

ASK THE EXPERTS appears weekly from training camp through the Super Bowl with answers to a new question being posted Thursday morning. How the guest experts responded when we asked them: Who is your favorite nobody who's become somebody in the 2020 season?

James Robinson has to be one of the greatest "who?" players in the history of fantasy football. He was picked up as a free agent in all leagues when the Jaguars suddenly released Leonard Fournette and promoted into being a starter despite never being drafted this year. He's been a Top-5 running back all year, much to the chagrin of everyone who drafted Fournette expecting just what Robinson is providing. He is on pace for over 1,600 total yards and 13 touchdowns. Gotta pay attention at all times!

This player hasn't had a big season, but he's performed when I needed him the most: Rams RB Malcolm Brown. Many weeks when Christian McCaffrey was out, Brown started for me and produced solid numbers most of the time. That's all you can ask for from an inconsistent No. 4 RB. He's scored 5 times in 2020. Not bad at all!

The Giants are considered a lesser team, but they’ve been playing hard all year. They got blown out by the 49ers in September, but they’ve been in all of their other games. And now it seems like they’ve stumbled onto a running back. Wayne Gallman has scored touchdowns in four straight games. He’s averaged 50 rushing and 14 receiving yards in his last four games, with 5 TDs. At a position where the talent gets thin in a hurry, he’s a starter-quality back right now.

Marquez Valdes-Scantling, "The Law Firm", had a very good Week 1 then sequestered himself from further fantasy production. Under cross-examination, the facts came out that he was a waste of a roster spot and should be relegated to the bench. His appeal for clemency was granted with a stay of execution in Weeks 9-10, with an ultimate verdict of guilty...of being a threat to score on any given play. MVS should be a model fantasy citizen going forward. Case closed, court adjourned.

When the Giants lost Saquon Barkley, they sounded the alarm for Devonta Freeman. They could have just looked down the end of the bench for Wayne Gallman, who's taken over in recent weeks. Gallman sees double-digit touches every Sunday, and he's scored a touchdown in four straight games. The Giants have turned into this year's Dolphins, a scrappy team with a turnaround culture. With Philadelphia floundering, New York has an outside chance to steal this crazy division. Gallman can be a part of that.

In my head it was going to be JaMycal Hasty; unfortunately Kyle Shanahan preferred the low-impact, low-yards-per-carry performance of Jerick McKinnon right up until Hasty broke his collarbone. So instead I'm going with Jakobi Meyers, who's had an awesome month, with a couple of good games, a huge game against the Jets, and then last week throwing a touchdown pass. Meyers may not be able to sustain it (his quarterback doesn't throw touchdowns, which is kind of a negative) but he's been a nice option at a time I needed it. And in my dynasty league, he's eased the sting of my selecting N'Keal Harry early in last year's rookie draft considerably. If I'm being totally honest, it's James Robinson in a runaway. And although Justin Herbert isn't a "nobody" as a 6th-overall pick, few expected him to be a fantasy starter this season -- instead he's been an absolute star.