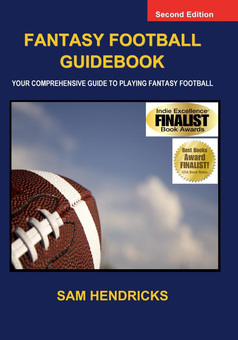 For the second time in three years, Sam Hendricks is the winner of the Fantasy Football Index Experts Poll. He was able to outperform 19 other industry analysts in our annual player ranking competition.

We asked each person in the field to submit a top 20 at each position. We then awarded credit using a complex scoring grid (basically, the higher you rated a player, the more his 2020 production counted towards your score.) There is no draft, lineups, trades, waivers or games in this competition. Instead, you’ve got a 120 different players working for you (selected in late May) with all of their stats in all of their games counting.

Hendricks, who authors the Fantasy Football Guidebook, won the kicker position while finishing 2nd at wide receiver. Those were his strongest positions. He also helped himself by finishing 6th at defense and 8th at tight end. He wasn’t as strong at quarterback (11th) and running back (13th), but he managed to avoid taking a big loss at any one position.

Jeff Ratcliffe of Pro Football Focus finished in the No. 2 spot, falling just short of winning his second title in four years. If we set aside the defense category (where he finished only 16th), Ratcliffe would have been the overall winner.

Scott Pianowski of Yahoo! Sports finished in 3rd, continuing his long run of success in this competition. He’s been in the Experts Poll every year since 2000, with three titles, a runner-up finish and three 3rd-place efforts. He’s finished in the top 5 in 10 of his 21 years.

Injuries play a big role in this kind of competition. A key player gets hurt (Dak Prescott, Saquon Barkley) and you have no ability to replace him. Instead, you’re just taking a zero at that spot in a bunch of games. So it’s not a perfect competition, and there’s fluctuation with the standings. Cory Bonini and Paul Charchian have both won it in the past, but they finished down in the bottom-2 spots this year. But it’s one way to look at the players, and by crowning a champion, it helps prod the guys to be careful and thorough when putting together their top 20s for the poll.

Taking a quick look at each of the positions, we can try to make sense of where some of the key decisions were made – what caused people to rise to the top.

At quarterback, Aaron Bland of YouRulz.com was the winner. In the top 10, he was higher than most on Russell Wilson (3rd), Kyler Murray (4th) and Josh Allen (7th) and lower than most on Dak Prescott (5th). Those picks helped him.

Also helping him in the teens was the decision to not rank Joe Burrow or Jimmy Garoppolo. Those guys both got hurt and missed half the season, and durability is key in this scoring format. In this area, Bland was instead the highest on Philip Rivers (15th) who punched out his usual 16 starts and put together a lot of serviceable games in the second half of the season.

Justin Eleff and long-time poll veteran David Dorey were the 2nd- and 3rd-place finishers in this category.

David Gonos of The Athletic finished last at the quarterback position. I believe that was powered by him missing on a bunch of picks at the bottom of his top 20 (he didn’t get enough out of Sam Darnold, Daniel Jones, Jimmy Garoppolo and Joe Burrow. But he bounced back in a big way at the running back position, coming in ahead of everyone.

The initial picks look like a lot of other ones – McCaffrey, Barkley, Elliott, Cook, Kamara to open. It was further down where the separation occurred, and it’s not as easy to see.

Gonos was the 2nd-highest on Jonathan Taylor (13th). I think that was his most important pick. He was helped himself by being higher than most on Nick Chubb (6th) and Josh Jacobs (9th), while having the good sense to not even list Raheem Mostert, James Conner, David Johnson, Mark Ingram and Devin Singletary.

Scott Pianowski and Mike Clay took the silver and bronze in this category.

Tom Brolley of The Fantasy Point captured first place in the wide receiver category, and the key picks are easy to spot. He ranked Calvin Ridley (10th) higher than anybody, while half of the field didn’t include Ridley at all. And Brolley was one of only six to include DK Metcalf in his top 20. Not as flashy but equally as important, Brolley didn’t include Courtland Sutton in his top 20 (Sutton missed most of the season, making him one of the key picks).

Hendricks (who also omitted Sutton) finished 2nd in this category.

Tony Holm hit on an impressive trifecta of picks at the wide receiver position. He was one of two who dropped Michael Thomas down to No. 2, while he was the highest on both Keenan Allen (8th) and Stefon Diggs (13th). But Holms couldn’t seal the deal by scoring well enough on his other selections (he was also the highest on A.J. Green and ranked Kenny Golladay 6th).

At the tight end position, Michael Nazarek of Fantasy Football Mastermind was the overall winner, but the reasons don’t jump out as being obvious. He wasn’t the highest or lowest expert on any player, and his choices here don’t stand out as being wildly different than others. Five others finished within 714 points of him (which isn’t much when the top 6 all scored over 48,000 points.

Two of Nazarek’s key picks, I think, were choosing to omit Blake Jarwin and Greg Olsen. Those guys showed up in the teens on a lot of boards and didn’t provide much of anything (Jarwin was probably going to have a good year but got hurt). Nazarek instead was one of only seven to find room for Eric Ebron, who was able to contribute some decent games.

Mike Clay and Jeff Ratcliffe were the other medalists (with Clay only 43 points back).

Sam Hendricks won the kicker position, and the difference makers in his top 20 are easy to identify. He was the highest on Daniel Carlson (16th), while only three others even included him in their top 20. And Hendricks was the only contestant who didn’t include Josh Lambo or Austin Seibert on his board (those guys didn’t play much, going down as costly, wasted picks). Hendricks was also one of the highest on Jason Myers (9th), which helped him. Definitely his category.

Michael Nazarek and Scott Pianowski were the only other two analysts to go over 32,000 at this position.

Tom Brolley won the defense category, going down as the only expert to win two of the categories (he also won at wide receiver). Michael Nazarek, meanwhile, finished 2nd. He was the only contestant to finish in the top 2 in half of the six categories but still finished only 13th in overall (outside the top 15 in all three of the more high-profile positions – QB, RB, WR).

With defenses, we used the vanilla scoring system of 6 points for touchdowns (including special teams), 2 points for takeaways and 1 for each sack. The Colts led the league in scoring at this position, just ahead of the Steelers.

On the scoring for this competition, we use a combination of production and rank. You take each player’s NFL production (his fantasy points total) and multiply it against where he was ranked. The higher a player ranks on a list, the more his productions counts.

Years back, we used a different scale, with the grading numbers declining from 20 to 1, but in that format, the guys in the late teens didn’t matter enough. We have also tried a 30 to 11 scale, but in that format, it becomes too much a competition of simply who can pick 20 guys are each position who are playing. Playing around with the different formats, it seems like the 25 down to 6 grading scale works the best.

At the suggestion of Chris Liss of Rotowire.com (who’s been in this competition for years) we’ll also grade the picks after putting a floor under each player. That is, if you have a guy who gets hurt or otherwise underperforms, you gets a lesser warm body type of replacement, limiting the damage. The idea being that in a regular league, when Dak Prescott gets hurt, you don’t get a zero all year at that position; you would reasonably pick somebody up off the waiver wire to replace him, limiting the damage. That makes sense, and I’ll grade the picks up in that way in the next few days and see if they’re any different. (Cory Bonini was the only guy who ranked Saquon Barkley No. 1; he’ll be interested in seeing what they look like.)

But I have rolled out enough numbers for one day. Congratulations to Sam Hendricks on landing another Experts Poll championship.