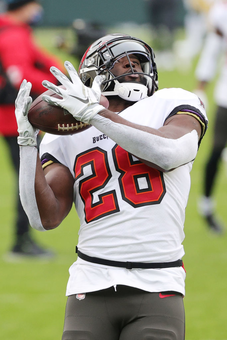 Who changed your opinion most this postseason?

ASK THE EXPERTS appears weekly from training camp through the Super Bowl with answers to a new question being posted Thursday morning. How the guest experts responded when we asked them: Which player or team has changed your opinion, for good or ill, the most this postseason?

Leonard Fournette has reestablished himself as a primary back that offers a dual threat for an offense. He's a free agent in February and may end up resigning with the Buccaneers like how Kareem Hunt remained with the Browns to make that powerful backfield between Hunt and Nick Chubb. But he's likely to have a chance to sign elsewhere and resume his career as "the guy," and hopefully has learned about how to be a better teammate and not rub the powers that be in the wrong way ever again. He's looked like the better back in the Buccaneers backfield with his receiving ability included.

Not a player, but I have to say I’m not thrilled with the Saints’ postseason revelations about Michael Thomas’s ankle. By midseason — right around the time they were sitting him down for punching a teammate — he was “close” to fully recovered from the high ankle sprain he’d picked up back in Week 1. Except that now it turns out he was never so close, and the ankle needs surgery, and this is the second year in a row (after Alvin Kamara’s mystery knee in 2019) that it would have been better to bail on an injured Saint as soon as the guy missed any time at all. I’m not saying the team is lying about injuries — not exactly. But fool me twice and I’d prefer to get my superstars from some other team in 2021.

With the Bills, Zack Moss suffered a season-ending ankle injury in their first playoff game. That elevated Devin Singletary into a more substantial role, giving him the opportunity to show he could be more of a full-time guy. I thought Singletary played well at times as a rookie. But this time around, Singletary didn’t make much of an impact (against both Baltimore and Kansas City). In the AFC Championship game, he wasn’t really any better than T.J. Yeldon, who wasn’t even active for most of the season. At this point (two years into his career) I think it’s safe to say Singletary is more of a backup or committee back rather than a player who’ll ever put up top-30 numbers. For 2021, he’ll likely be behind Moss on the depth chart for most of the season, and I believe Buffalo will be adding another notable player at that position.

One guy I have to mention is Cam Akers. Not only was he the standout of the Rams' upset over the Seahawks, but he was the lone bright spot of their loss at Green Bay. Definitely a guy I'll be interested in drafting in the top 15 picks next summer. I'll also mention a team: Cleveland. In their win over Pittsburgh and narrow defeat to Kansas City, they showed me they're for real, especially on offense, if they can keep things together. I think they might start winning AFC North titles. Along with that, the Ravens changed my opinion negatively. I'm not sure Lamar Jackson is good enough, and I know the offense as a whole isn't. I see people saying he just needs better receiving weapons, but we've seen plenty of strong passers advance in the playoffs with marginal receiving corps. Jackson isn't a strong passer, and I'm not sure he can be.