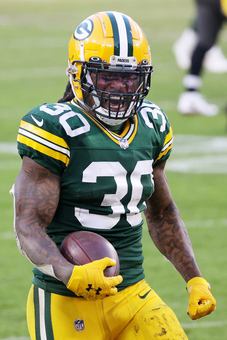 Jones looks to be gone

Couple of recent stories on Green Bay free agent running back Aaron Jones. One (which I question) indicates he could command up to $15 million per season; that sounds high. Another that Miami could be one of the interested teams. Whatever the case, it seems likely that some team will offer him more than the Packers, and he'll be gone.

If and when that happens, Green Bay will be left with Jamaal Williams (bad-ass pictured) -- also a free agent, but likely to be a lot cheaper than Jones -- and last year's second-rounder AJ Dillon. My thinking is that if Jones goes, the Packers will find a way to bring Williams back, and we'll be looking at a Dillon-Williams committee. The question will be who will be the better selection in fantasy drafts.

I've seen some support for Williams, who's had his moments while filling in the last couple of years. Looking at the full game log (games where he got double-digit carries), he wasn't particularly impressive his first couple of seasons. In 2017 and 2018, he had at least 10 rushing attempts 13 times. He averaged more than 3.7 yards per attempt in only four of those games -- not good. Not exactly a lead back profile, which factored into Jones taking over the starting job in the first place.

Look, however, at the last two years. Better offensive system, and perhaps a better, definitely more experienced and comfortable Williams. In his nine games with double-digit rushing attempts, Jones was under 4.1 per attempt only once; at least 4.7 in nearly half of them. Yards per carry isn't everything, but reasonable to think Green Bay could look at that production and think they'd manage fine with Williams as their starter in 2021.

Most likely it's going to be a committee with Dillon if Williams is re-signed. Dillon, most will recall, was a monster in a Week 16 win over Tennessee, rushing for 124 yards and 2 TDs. He'll have a role, and maybe be the main runner -- lots more upside as that ballcarrier than Williams.

But that one game is all we have to go on with Dillon. He had no more than 5-6 carries in every other game last season. And we can say for certain it will be Williams in all passing situations, since he caught at least 4 passes in five of those games with a sizable offensive role last season. Dillon was thrown to twice all year.

For now, we'll need to see for sure if Jones leaves, and if Williams stays. It's possible both will be gone, making Dillon more of a sure thing as the lead back.

But if I were drafting right now, I think there's a really good chance that Jones should be selected as a featured back with another team, and Williams and Dillon should be drafted with the idea that they'll split the backfield in Green Bay. Williams, with the passing down work to himself, looks like the safer bet, with some chance he starts and gets half the carries. Dillon might be a 10-12 carry a game guy, with his most value in standard or TD-only formats; not as sure to be a solid starter in PPR formats.