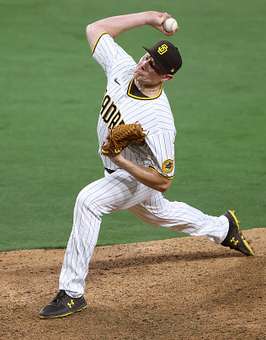 Player value is fluid. We enter draft day with one set of dollar values, but once Opening Day arrives, everything can change in an instant. Injuries, role changes, and sudden skill improvements can make a player who was an afterthought on draft day suddenly valuable.

Less than a full week into the season, these five players (listed alphabetically) are already possible fantasy finds who could help in 2021:

Chris Devenski, RP, ARI
Devenski was placed on the restricted list yesterday for personal reasons, but he is part of the closer picture assuming he returns soon. A changeup artist who was an All-Star and dominant force in the Astros bullpen early in his career, Devenski has struggled in recent seasons between the juiced ball and injuries. He posted a 4.83 ERA in 2019, allowing 13 home runs in only 69 innings, and made only four appearances last year due to elbow issues. He had to settle for a minor league deal with Arizona this year, but won a spot with the Diamondbacks after throwing seven scoreless innings in Spring Training and was given the first save opportunity of the year. That came as a huge surprise considering his lack of significant experience compared to fellow newcomer Joakim Soria, along with Stefan Crichton’s experience in the role with Arizona in 2020. Still, Devenski has shown he can be an effective pitcher in the past, and Soria’s calf injury could open the door for more save opportunities and fantasy consideration.

Jed Lowrie, 2B, Athletics
The oft-injured Lowrie signed a two-year, $20 million contract with the Mets in 2019, but he had a grand total of eight plate appearances during the contract due to a chronic knee issue. Oakland was happy to bring him back on a minor league deal after Lowrie had two of his best seasons with the A’s in 2017 and 2018. Surprisingly, he stayed healthy and had a nice spring with an .856 OPS, winning the starting second base job over Chad Pinder and Tony Kemp. What does Lowrie have left after two years of injuries and just days away from age 37? That’s tough to say, but at Lowrie’s peak, he was a very useful player and should at least be on the radar of mixed league fantasy managers.

Mark Melancon, RP, Padres (pictured)
San Diego was one of the most active teams of the offseason, acquiring Yu Darvish, Blake Snell, and Joe Musgrove, along with significant positional depth. With all the moves, it was a surprise they didn’t address the closer role more decisively than bringing in former Braves closer Mark Melancon on just a one-year, $3 million deal. During Spring Training, it was unclear who would get the first look for saves, with Drew Pomeranz battling a minor forearm issue, Melancon struggling with his control, and Emilio Pagan coming off a disappointing first season in San Diego. The Padres turned to Melancon in their first three save opportunities, and so far, so good. It seems far too soon to drop Pomeranz or Pagan, but Melancon should give manager Jayce Tingler more confidence with every converted save opportunity.

Yermin Mercedes, DH, White Sox
Mercedes surprised by winning a roster spot out of spring training, as a 28-year-old minor league veteran with only one career MLB plate appearance. He gave the White Sox a third catcher off the bench, but it’s Mercedes’ bat that won him the job. Mercedes proceeded to go 5-for-5 in his first career start and 3-for-4 with a home run the following day. Suddenly, Mercedes has gone from valueless to buying himself a real shot at playing time at the wide open DH spot. A career .302 hitter with an .857 OPS in the minors, Mercedes shows real upside if he can maintain playing time. That will be the hard part with Adam Engel returning from a hamstring injury soon and Zack Collins also vying for playing time. Still, there would at least seem to be enough upside for AL-only leaguers to take a chance, especially in formats like ESPN where Mercedes has catcher eligibility.

Julian Merryweather, RP, Blue Jays
A converted starter, Merryweather arrived to the majors at age 28 last season but showed a big fastball between starting and relief. He was just fighting for a roster spot this spring but had it disrupted by back issues. The two Spring Training appearances the Jays did see from Merryweather were enough to win him a job, and now we can see why. Merryweather has been electric in two regular season appearances, averaging 99 mph on his fastball and converting two saves. The second save on Sunday is the most significant, getting the ninth inning after assumed closer Jordan Romano set him up in the eighth inning. Toronto manager Charlie Montoyo comes from the Rays school of mixing and matching in the ninth inning, so it’s far too early to write off Romano or go all-in on Merryweather. Still, it’s clear Merryweather will figure heavily into the saves picture for a good Jays team after being perceived to have little or no value for fantasy managers entering the year.