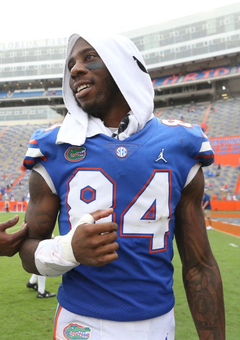 It's that time of year again: NFL Draft is complete, rookie drafts in dynasty leagues can start when ready. Mine is this weekend, a three-round affair in a PPR league that starts 1 quarterback, 2 RBs, 2 WRs, 1 TE and 2 RB-WR-TE flex spots. It's also TE-premium (1.5 points per reception), so you won't be surprised at how early Kyle Pitts goes.

My goal here is not to provide strict rookie rankings, since I'm still working on mine. Rather, it's a marriage of how I think the draft should go (my preliminary rankings) and how it actually will go (guessing how the rest of the league ranks these players, allowing for them liking some players more or less than me). Ideally, it will be useful to those who have their own drafts coming up. Next week, I'll recap how it actually went.

This is how my draft actually will go; I know the guys making these picks pretty well. TE-premium helps Pitts go this early (the RB-poor guy who admits he's locked in on Harris considered him at 1.o1). The relative length of running back careers could cause Pitts or a wide receiver to go first in some dynasty leagues, but positional scarcity (and the fact the class itself doesn't look strong) will probably help push Harris there in most leagues. If this were a SuperFlex league, Trevor Lawrence would be the pick, but it's not and quarterbacks just aren't coveted enough in 12-team, 1-QB leagues to get him taken this early.

As for the players themselves: Harris was a star in Alabama's powerhouse offense and goes to a team where he should immediately start (and that has long favored a single, featured running back). Pitts was just the earliest a tight end has ever been drafted in league history, big and ridiculously fast and going to work with a quality quarterback in a pass-happy offense. Way more talented than Austin Hooper and Hayden Hurst, who both put up good numbers in their years as starters.

I'm not exactly sure how these players will be ordered. Everyone is bummed about Etienne's landing spot behind/alongside James Robinson, so he could fall a few spots. Williams might also need to wait patiently behind Melvin Gordon, and wasn't as dynamic in college as Etienne. Chase might go as high as No. 1 in a lot of leagues; great player and he gets to work with his college quarterback (who looked very good as a rookie). But Tee Higgins isn't going anywhere and Tyler Boyd and Joe Mixon will also be busy, plus Joe Burrow won't throw 60 touchdowns. But these will likely be the next three players.

Smith just won the Heisman, but Waddle was drafted a spot earlier, is 10-15 pounds heavier, and at least possibly got the endorsement of his college quarterback. (The Dolphins must have asked Tua for input, right?) I'm not sure I believe in Tua anymore than I believe in Jalen Hurts, they're both relative unknowns. But the Dolphins have given off more of an impression the last two years of moving in the right direction. The Eagles, I'm not going to beat the point to death, but I don't have much confidence in them these days.

Seems like about the right spot. It's one thing to take a top-3 running back or wide receiver drafted in the top 10 ahead of the best quarterback prospect of the past decade, quite another to roll the dice on a Ravens, Giants or Jets wideout. Both upside and risk with those guys, while there's minimal of the latter with Lawrence. I have Kyler Murray, other teams seem set with the likes of Prescott, Wilson, etc. But it's comforting to think of securing the quarterback position for the next decade with a prospect like Lawrence.

These are the next four wideouts drafted. I suspect Bateman will go first with the opportunity to be a No. 1 WR in Baltimore's offense. As Ian mentioned here the other day, that's a dubious honor, since the team will emphasize the run heavily and spread it around, including to Mark Andrews. I personally am more interested in either of the Moores. Too bad Rondale has so many players to fight his way through (are we 100 percent certain that Larry Fitzgerald's not coming back? To join DeAndre, Kirk, A.J....), but a year from now it might be just Hopkins and Moore. Elijah and Kadarius both look pretty good on film. But there is plenty of competition for targets in both spots and the quarterback play is uncertain, too.

The last of the only four running backs selected in the first three rounds, Sermon has feature-back size and clearly the 49ers think he's great for their scheme, trading up with the Rams to take him. I'll try not to overrate the plethora of backs ahead of him, since injuries and under-performance tend to work these things out. On the other hand, San Francisco has struck out with both draft picks (Joe Williams) and free agent signings (Jerick McKinnon, Tevin Coleman) in recent years, so how much faith are we supposed to have in their running back choices? Considerable upside if Sermon winds up starting (and stays there, which is even harder to predict in San Francisco), but it feels like you're passing up some surer things if you put too much confidence in him. He could go a couple of picks earlier or a bunch of picks later; tough to say.

Tight ends get a point and a half per reception and the Steelers took this Penn State product in the second round, rather than addressing their offensive line, so you know they like him. Penn State tends to turn out competent all-around players at the position, and I'd seen Heath Miller comparisons even before he ended up in Pittsburgh (also Kyle Rudolph). Not sure he'll actually go this early (a year ago I took Cole Kmet about a round later in this draft), but possible.

I'm less certain of how players are likely to be valued by this point. Marshall averaged more than 100 yards and scored 10 TDs in seven games for Louisiana State last year, following in the footsteps of guys like Justin Jefferson and JaMarr Chase, A week from now, Rodgers in particular could look great as a possible No. 2 catching passes from reigning MVP A. Rodgers, or iffy should that quarterback be, you know, traded or something. But I currently believe that will be worked out in some fashion, and Green Bay's early fourth-rounder looks appealing. Carter was half of a tandem in North Carolina and the Jets have a pretty sorry collection of running backs. Sadly the Jets haven't earned a lot of trust with their personnel decisions, and no one had enough interest in Carter to draft him before the fourth round.

If the 49ers were willing to part with two future firsts for the right to select Lance, those in rookie drafts can certainly risk a mid-2nd. Considerable upside, arm talent, and running ability, albeit just a one-year starter (and that was in 2019).

Eskridge is a great athlete (also played cornerback in college) and a second-round pick; kind of looked like a reach but Seattle has a history of liking certain players more than other teams and often it works out for them. Fantasy-wise, though, he's gonna be a No. 3 in Seattle for the foreseeable future. St. Brown goes to a receiver wasteland in Detroit; opportunity is important. Fourth-rounder, though.

Eight running backs were selected before Gainwell, but two of those guys definitely aren't beating out starters (in Minnesota and Carolina) and a third is going to New England, which is obviously undesirable. Hard to get too excited about a fifth-rounder ticketed for a No. 2 or 3 role in Philadelphia, but at least some chance he carves out a passing downs job. It's about the spot in the draft for taking shots on running backs, at least. Hubbard rushed for over 2,000 yards and 21 touchdowns for Oklahoma State in 2019, then had an injury-marred 2020. He wasn't a huge part of the passing game (53 catches in 33 games) and he might not get on the field much in Carolina.

Wilson is encumbered by coming out of Brigham Young and having his breakout season against a suspect schedule (the pandemic had them playing only conference foes, so they lost several quality Big Ten and Pac-12 opponents), plus he plays for the Jets. Fields was viewed by some as the 2nd-best quarterback in the draft, though not apparently any actual NFL teams. Denver and Carolina passed on him, and the team that traded up for him doesn't inspire any more confidence in its quarterback evaluations or development than the Jets. Fantasy-wise, though, he could be a viable starter if and when he takes over. A year or two from now either the Broncos or Bears are going to look really smart or really dumb.

Rookie running backs, the fifth first-round quarterback, a couple of tight ends with potential. Nothing to get overly excited about here; welcome to the third round of rookie drafts.

Atwell and Schwartz have sub-4.4 speed and look like potential spot contributors in deep receiving corps. That in itself might not be enough to merit fantasy relevance. Collins and Palmer have clearer paths to significant snaps, but it's difficult to be optimistic about anything connected with Houston's passing game, and Palmer wasn't a big college producer. Outside shot of being Justin Herbert's No. 2 a year from now counts for something, though.

These quarterbacks' early selection in the third round raises the possibility that the teams view them as future starters. One of the odder moments of draft weekend was NFL Network's Rich Eisen confusion about Houston drafting a quarterback, as if he was oblivious to the past several months of Deshaun Watson stories. In any case: if you can trade 3rd- or 4th-round rookie picks for 2022 choices, do it.

Trey Lance turns 21 today. He was only a 20-year-old when San Francisco drafted him No. 3 overall. Who was the last quarterback selected No. 1 overall who was even younger than Lance?