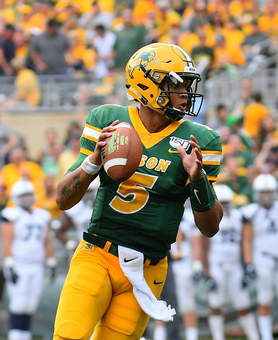 The first round of the NFL Draft has finally come and gone. We no longer need to speculate where the top quarterbacks, running backs and pass catchers will go; we know. Some thoughts on the biggest stories from the night and the winners, losers and incompletes thus far.

49ers take Trey Lance. The NFL and fantasy world were losing their collective minds about the thought that San Francisco had given up two future first-round picks for Mac Jones. Turns out that no, they did so for the unpolished dual threat quarterback from North Dakota State who has a big arm and running ability but started just one season (2019), and at the FCS level to boot. "I know how we felt about Trey the whole time," said Kyle Shanahan afterward, admitting he had no desire to correct the idea San Francisco was after Jones. Paired with a smart offensive mind and on a team with plenty of talent at receiver and on the line, I think Lance is in the best possible spot to succeed.

Denver passes on Justin Fields; Chicago trades up for him. Denver passing on Fields seems to be the most criticized moment from Round 1, and I don't know any Broncos fans who aren't beside themselves. The only people OK with it are those who envision an imminent trade for Aaron Rodgers. The Packers say they aren't trading Rodgers, and for now I believe them, so I think the NFL world and Broncos fans are going to need to come to grips with the fact that Denver, for whatever reason, didn't think highly enough of Fields to believe he'd be the franchise quarterback they so clearly need. The only team we can say for a fact did believe in Fields is the Bears, and they've made enough missteps in this area over the years that those who are torching the Broncos today need to at least consider the possibility that drafting a quarterback just because you need one isn't always the right move. I understand we have to make snaps judgments now, but I'm not going to rip the Broncos for not taking a quarterback just to take one. If Fields is a star and the Broncos whiffed, well, they'll get ripped plenty. Fields in Chicago, well, it's hard to have a lot of confidence in the Bears developing him properly, but it's going to be a short stint in the lineup for Andy Dalton.

Falcons take Kyle Pitts. The fact that Atlanta stayed put is both a statement about how highly everyone regarded the tight end and an indictment, I think, of the quarterbacks after Lance. Once the 49ers traded up to No. 3, Carolina traded for Darnold, the Eagles traded down, the Broncos selected a cornerback. (Score one for those of us confident that the Falcons, Eagles and Panthers wouldn't be drafting a passer early, giving their incumbents at least one full season.) If nothing else changes in Atlanta, they should be able to put Julio Jones-Calvin Ridley-Kyle Pitts and I guess Hayden Hurst on the field and have a pretty strong-looking offense. I think we all know Hurst is just someone who benefitted from the role, and now he'll be the second of a 2-TE set at best. Pitts could/should be a top-10 TE right away -- rare with rookies, but it happens.

Steelers take Najee Harris. We've talked plenty about this one already. Pittsburgh has some offensive line upgrades it needs to implement, and maybe if one of the top 5 had made it to them it would have gone that route. But Harris has three-down potential on a team that likes to use a featured runner. I think he's the 1.01 in rookie drafts.

Jaguars take Travis Etienne. Ugh. Disappointing for those with James Robinson (and Robinson himself, obviously), and one's soul dies a little when Urban Meyer says they envision one of the draft's best running back talents as a "third-down back." But talent tends to rise up in these situations, and running backs get hurt. Would have been nice if Etienne had landed somewhere where he's more likely to be a Week 1 starter, but working with his college quarterback (who he caught 85 passes from the last two years) shouldn't be underestimated. If landing spot causes Etienne to slide a little in drafts, that's OK with me.

JaMarr Chase to Bengals. Like Pitts with Atlanta, most saw this coming. I had thought/hoped they might take Penei Sewell, but Cincinnati likes Jonah Williams and added Riley Reiff in free agency, so they do have credible tackles, if they can keep Williams on the field. Pairing Chase with his college quarterback, which was a thing last night, was evidently too tempting to pass up. The downside is that the crowding issues discussed in yesterday's Antonio Brown piece will crop up, with either Chase, Tee Higgins or Tyler Boyd getting left out of whatever Joe Burrow manages to do.

Jaylen Waddle to Dolphins. Those who knock the Bengals for passing on Sewell should give the Dolphins even more grief, since it seemed like an even greater need for Miami. But they did draft Austin Jackson in the first round last year, and since we all expect Will Fuller to get hurt it's hard to argue with them drafting one of the top wideouts coming out. Were they hoping for Chase when they traded back up from 12 to 6? Only they know. Waddle gets a lot of Tyreek Hill comps and if they're right, no one will regret this pick. How his college quarterback Tua Tagovailoa develops will be key to this one working out, both in fantasy and the NFL.

DeVonta Smith to Eagles. Watching the draft on ESPN, they went with a Calvin Ridley comp. (Aside: It was really weird that ESPN, in doing its player comps, showed highlight of the players that the draft picks were being comped to. I think we all know what a Travis Kelce highlight looks like without needing to see one after the Falcons draft Kyle Pitts.) I would have probably gone with a DeSean Jackson comparison myself. The Eagles traded down from 6 and up from 12. They picked up an extra 1st next year, and if Smith turns out better than Waddle they'll look pretty smart. We'll see. I think in general if you draft wide receivers in the first round in back-to-back years it's not a good look, but maybe both Jalen Reagor and Smith will be great, and help Jalen Hurts have a breakout season. I think I wish Smith had gone to another team, though, with an offensive coaching staff and quarterback I trust a little more than Philadelphia's.

Kadarius Toney to Giants, Rashod Bateman to Ravens. Toney is a guy I saw some stuff on early in the draft process, but not as a first-round pick. In general I'm reading some head-scratching about this one, with New York seemingly in decent shape at receiver. But Darius Slayton has been inconsistent and Sterling Shepard injury-prone, and we can give the Giants some credit for trading down for an extra pick (apparently sniped on their preferred target at 11). There's some poor man's Percy Harvin to Toney's game; we'll see if the Giants get that out of him. Bateman has No. 1 wide receiver potential in Baltimore, and very little in front of him; might be able to make Marquise Brown more of a No. 2 very quickly. Ravens have enough of a track record for savvy picks that I'll give them the benefit of the doubt here.

Mac Jones to Patriots. Watching the draft I kind of felt bad for Jones; wasn't his fault that most of the world thought the 49ers were going to take him at No. 3. But the guy frequently lauded for his accuracy, decision-making and "football smarts" goes from Nick Saban's team to Bill Belichick's, thankfully sticking a fork in all those stories about how New England was certain to trade for Jimmy Garoppolo. (Newsflash: Nobody is falling over themselves to trade for Garoppolo.) One thing for sure is that Belichick moves at his own timetable, meaning Jones will either be a Week 1 starter or won't get on the field until 2022. Fair to say that Jones is the heir apparent to Tom Brady and the Patriots have their next quarterback. Whether he'll be great or (more likely) just good remains to be seen, but I think the most realistic outcome is that he's like a young Brady, and a good NFL quarterback (but probably not a great fantasy one).

And that was the first round. Plenty of good players left, so no need to worry if your favorite isn't gone yet. Tune in tonight.

Trey Lance turns 21 today. He was only a 20-year-old when San Francisco drafted him No. 3 overall. Who was the last quarterback selected No. 1 overall who was even younger than Lance?